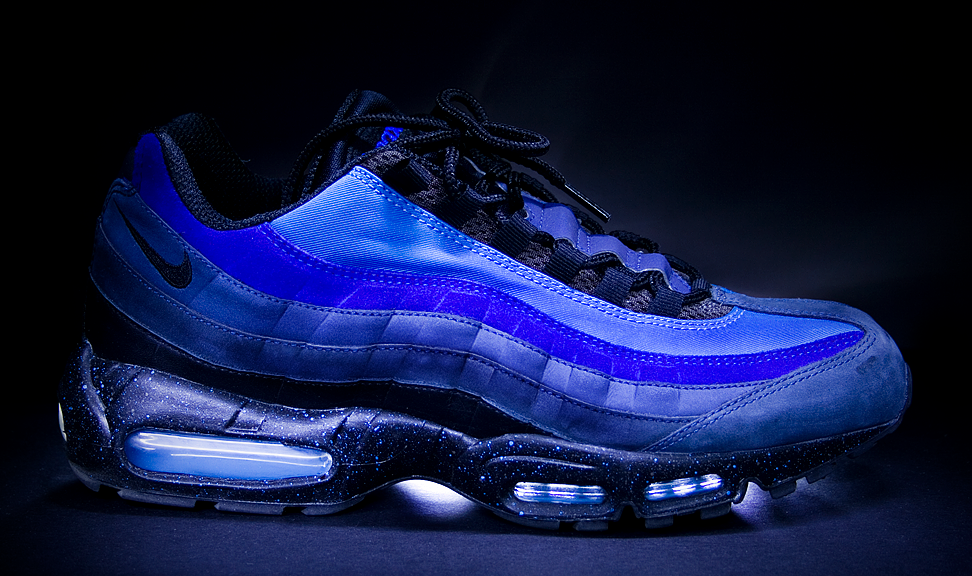 Sneakerheads are in the midst of a crisis, as they watch their prized possessions — those sick kicks they’ve been coveting for years — literally fall apart in their hands.

Turns out, those old-school Nikes are so out-of-this-world, they actually can’t survive Earth’s atmosphere. Wired has the scoop, and it’s truly heartbreaking. Take the story of Nagomo Oji, a Japanese sneakerhead who decided to whip out his DS/OG Air Max 95s with midsole BWs (DS = dead stock; OG = original; DS/OG = $$; BW = big window) after 20 years:

As soon as he planted his feet, Oji sensed something was terribly wrong. The midsoles flattened, and his footing became strangely unstable. He didn’t realize it at the time, but the polyurethane (PU), that squishy, shock-absorbing material sandwiched between the upper and the outer sole, was more than ten years past its projected lifespan.

After just one step, the hardened PU foam fractured and collapsed, like arid soil crumbling beneath the boots of a Dust Bowl Okie. Oji looked down in disbelief. With the inner soles completely detached from the uppers, his feet were actually touching the ground. His beloved Air Maxes had just morphed into Fred Flintstone shoes.

Or this tearjerker about a “geriatric hoarder” in Buenos Aires who has a whole showroom full of DS/OGs:

All of these shoes were found in various states of decay in one of the biggest known cases of PU mass destruction. Seven minutes into the video, collector Robert Brooks pulls a forgotten artifact labeled Silver Wind from the stacks. He’s elated. It’s an obscure Adidas runner that’s eluded him for “a long, long time.” But as he lifts the shoe, the sole peels off and falls into the box. Recounting the story later, he sighs and whimpers “No!” stretching out the syllable for a few seconds, like a Loony Tunes character plunging from a high cliff into the abyss.

The polyurethane-injected foam soles common in a lot of sneakers tend to spontaneously fall apart after a while. Who knew? Certainly not the executive director of the Polyurethane Foam Association, who spoke with Wired about the problem and seemed shockingly out-of-the-loop: “I’ve never seen a technical paper on polyurethane shoes falling apart. But now that you mention it, I’ve owned several pairs of shoes that started cracking inside and outside. I didn’t know if they were just poorly made or if I stepped into something.”

Come on, man! Try reading this 2011 study on the aging performance of polyurethanes, which says that plastics like the one used in these sneakers are susceptible to hydrolysis and oxidation. Here’s a translation from Wired:

That’s right, the two things that make human life possible — water and air — are killing our shoes. Their role in degrading polyurethane can be attributed to the chemical processes of hydrolysis (in the presence of moisture) and oxidation (in the presence of oxygen). Simply put, the humidity in the air, and, yes, even the air itself, seeps into the PU and, slowly but surely, breaks it into itty-bitty sticky pieces. Delve deeper into the subject, and the news only gets worse. Bottom line: Pricy collectables shouldn’t be made out of PU.

But there’s good news! SonBinh T. Nguyen, a chemistry professor at Northwester University, (jokingly) told Wired that sneakerheads can preserve their treasures if they just keep them in an “airtight steel vessel filled with argon.”

Zing! But seriously, isn’t this disintegrating sneaker fiasco really just one big metaphor for the impending demise of our species? We built a society that’s cheap, fast, and flashy. Sustainable? Not so much. And now, climate change is the water and oxygen to our DS/OG Air Max 95s. But good news! If all else fails, we could all just go live in steel bunkers.