What do apples, strawberries, burnt hot dogs, and bottom-feeding pigs all have in common? Hint: It’s not that they were all present at your last family barbecue. It’s that — and feel free to use this line at your next family barbecue — they’re all cucumbers.

Seriously! Here’s the pig, apple, hot dog, and a whole bunch of strawberries — all sea cucumbers nicknamed for their unique shapes and colors. Now, once you’ve roped Aunt Mary in with that little nugget of trivia, you can turn the conversation toward overfishing and climate change, which always goes well at family gatherings. Here, it goes like this:

According to a new study published in the journal Conservation Genetics, populations of “burnt hot dog” sea cucumbers off the coast of Japan are suffering from low genetic diversity — bad news for the sluggish invertebrates, since low genetic diversity means low adaptability in the face of environmental stresses like disease and climate change.

If at this point, Aunt Mary starts to lose interest — who cares about overcooked wieners, when we have salmon, coral, and tuna to worry about? — then it’s time whip out fun fact number two, from the California Academy of Sciences:

“It’s easy to underestimate the sea cucumber,” says Dr. Iria Fernandez-Silva, an Academy postdoctoral research fellow. “Sea cucumbers look goofy, move slowly, and barf up their guts when startled, but these invertebrates are superstar ocean cleaners that are hugely important to marine ecosystems.”

Now, normally, there’s no “but” that could possibly salvage the reputation of a slow-moving, goofy-looking, gut-barfing hot dog impersonator, but sea cukes are an exception. These valiant nocturnal creatures wake up every night to inch along the ocean floor, vacuuming up dead plants and animals, extracting nutrients, and excreting clean sand in their wake. It’s a dirty job, but someone’s gotta do it — and why not this guy?

So now that you’ve convinced Aunt Mary that sea cucumbers are important, give her the bad news: Looking at sea cucumber populations around Okinawa, Fernandez-Silva and her colleagues found lower genetic diversity on the east side of the island, where there’s more pollution and commercial development, indicating a possible link between water quality and genetic diversity (also giving a whole new meaning to the term “dirty water dog“). 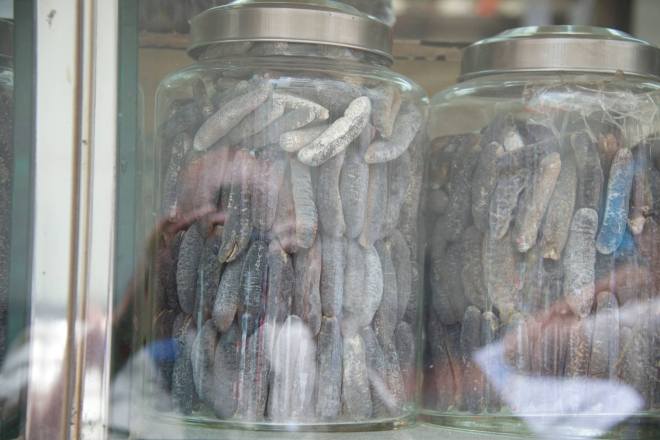 And things are only going to get worse for the already crippled populations, because we’re also overfishing them. From the press release:

A rapid rise in East Asia’s consumer demand for sea cucumbers for both food and medicine has increased fishing pressures in many parts of the world. Overfishing can spell extinction for species of sea cucumber that already face serious pollution and habitat destruction threats worldwide. For example, populations of Holothuria whitmaeiand H. scabra—once common in the entire Indian and Pacific oceans—have recently declined 60 to 90 percent in most of their traditional ranges. Today, at least 16 species of sea cucumber are considered threatened with extinction by the International Union for Conservation of Nature (IUCN) Red List, a global authority on the conservation status of plants and animals.

The solution, the researchers say, is to impose local regulations that protect sea cucumber populations, especially those suffering from overfishing.

OK — now let Aunt Mary go schmooze with other relatives. She’s been politely faking interest in what you’ve been saying for the past 15 minutes and deserves a second helping of coleslaw. She was going to have a hot dog, but you’ve ruined them forever.

What would actually happen if we stopped eating so much meat?