This roadkill map says a lot about California's drought 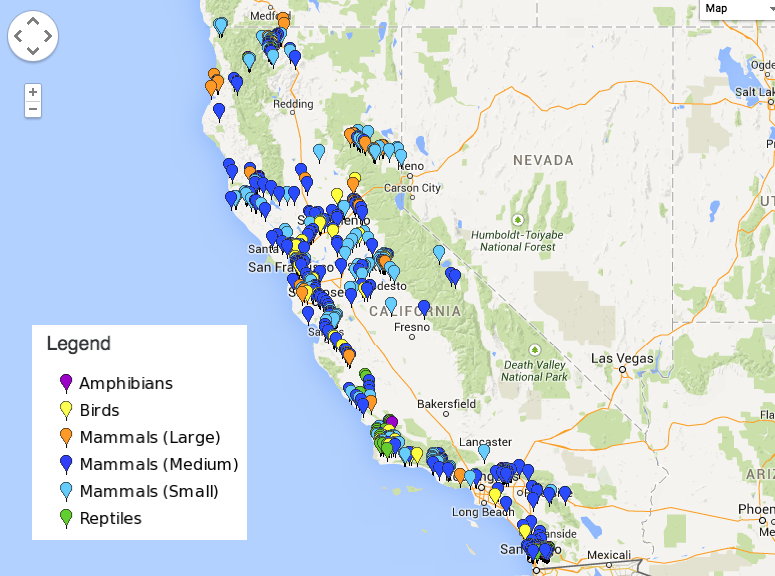 This roadkill map says a lot about California’s drought

California’s drought is taking a toll on the state’s wildlife. Not a huge surprise, given that the widespread dry spell is beating up just about everything, save aiding a resurgence in gold-panning and an increase in wine alcohol content. (Three cheers for the drought! No? Too soon. OK.) What’s more surprising than the drought’s effect on wildlife, though, is one way some researchers are observing it: by mapping roadkill across the state.

According to a recent article in Vox, the un-peer-reviewed observations of UC Davis professor Fraser Shilling, who operates the state’s largest roadkill monitoring system, show that there was a spike in roadkill numbers in the drought’s early stages. Shilling suspects this is because animals were roaming in search of food and water.

But, Vox reported, Shilling’s recent data showed an opposite trend: Roadkill numbers are decreasing because — yep, you guessed it — there are simply fewer critters overall.

It’s sad, I know. But get all your cries out now so you can pay attention, because Shilling and his team have gleaned a few other interesting tidbits about the state’s animals by tracking its dead ones. For instance, by pinpointing flattened animals, researchers can see the regions where different species are most abundant, track the spread of invasive species, and identify wildlife corridors that are going unused.

You can see for yourselves on the interactive map powered by California Roadkill Observation System, which shows where amphibians, birds, mammals, and reptiles have been struck in the past 90 days. It’s volunteer-powered, so if you’re a Californian with wheels, you can help the researchers by submitting any of your own, erm, hits.

But, note: If you want to help both the climate and all those thirsty Californian critters, it may be best just not to drive at all.