Hundreds of climate protesters around the world were arrested Monday, kicking off Extinction Rebellion’s “International Rebellion,” two weeks of direct action and civil disobedience protests in 60 countries. In London, protesters blocked all major roads around the Houses of Parliament, including Westminster Bridge, while hundreds more occupied Trafalgar Square. In Argentina, activists in hazmat suits and blood-red cloaks with white face paint called the “red brigade” occupied a Bayer-Monsanto office in Buenos Aires. And in the Netherlands, more than 100 people were arrested for trying to set up a tent city in a major tourism area.

In New York City, protesters staged a “die-in” in the middle of Wall Street in downtown Manhattan on Monday morning as part of what they called a “funeral procession for the earth.” Two famous statues, Charging Bull and Fearless Girl, dripped with fake blood that the activists had splattered all over their fellow protesters and the cobblestone streets. (The group cleaned up all the blood after the action ended.) Around 60 people were arrested.

Extinction Rebellion, a decentralized, non-hierarchical environmental action group born in the U.K., is different from Greta Thunberg’s Fridays for Future movement in a few notable ways. For one thing, the group is made up of people of all ages, not just youth. For another, the group’s main strategies are civil disobedience and other non-violent disruption techniques. The youth climate strikes, by contrast, are generally cleared with local governments and permitted ahead of time. This means Extinction Rebellion protesters are more likely to get arrested for things like trespassing and marching without a permit.

After the die-in on Monday, the NYC Extinction Rebellion group set up more than half a dozen tables and booths in Greenwich Village’s Washington Square Park, where they’re planning a weeklong occupation dubbed “RebelFest.” Pro-environment musicians and guerilla theater troupes performed and activists delivered speeches. The group’s camp included a food pantry, an art table, and a wellness area, though they didn’t have the city’s permission to table in the park. 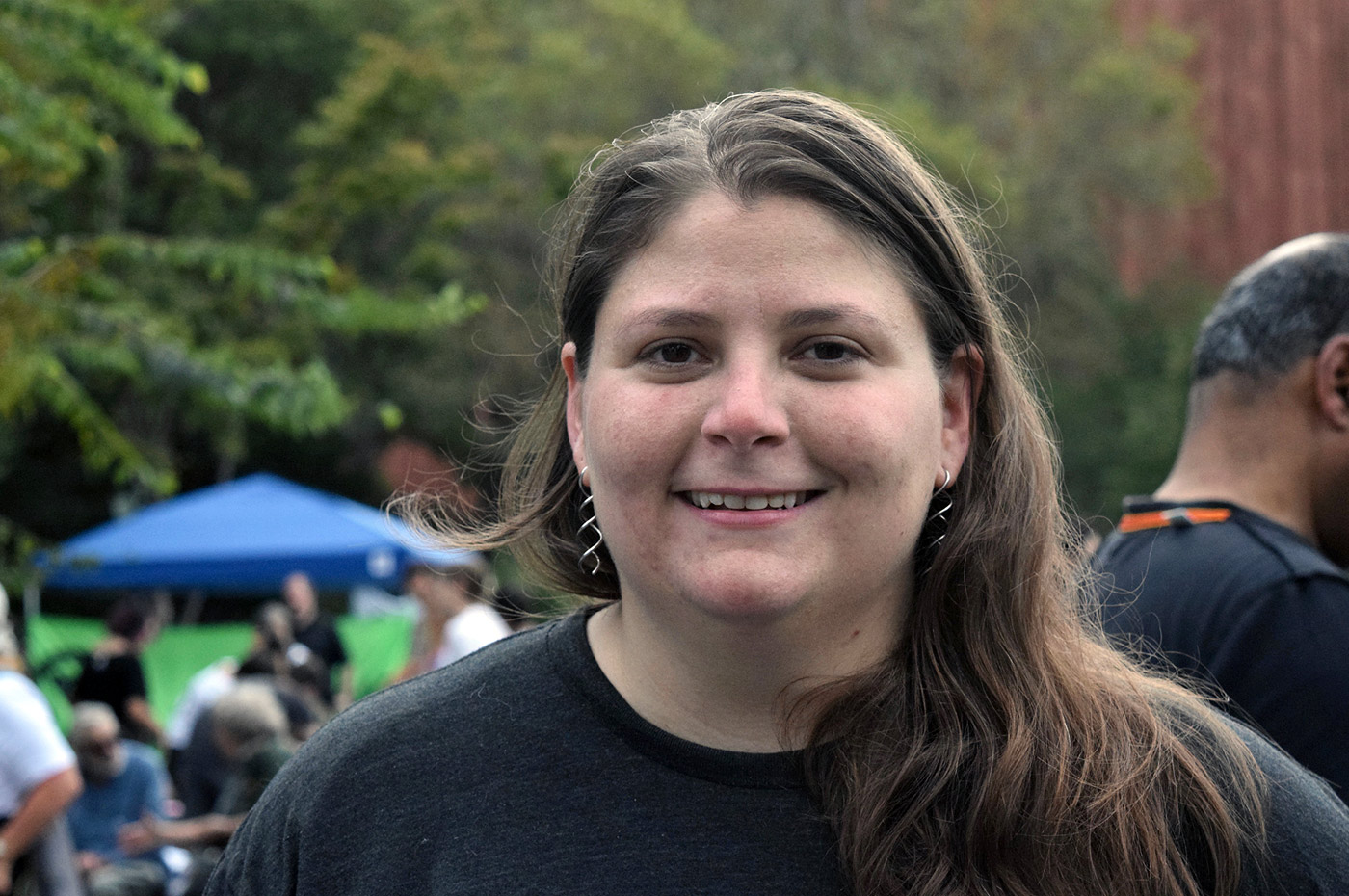 Christina See, an NYC-based organizer for Extinction Rebellion, said RebelFest is as much about education as it is disruption. There is a “massive difference in consciousness around the climate and ecological emergency” between the U.S. and Europe, See said. “You can see in Europe, there is mass mobilization happening, with people on the streets demanding their governments take action to protect their citizens.” In America, she said, it’s harder to get people mobilized in the same way because the country is so spread out.

RebelFest, See told Grist, “is about having a place for people to come, meet, and see that these are everyday people, not ‘radical activists,’ who are doing this.” See pointed out that she’d only been active with Extinction Rebellion for 10 months. “But we all see what’s happening, and we have a moral obligation to not just us, but future generations and all of the species on this planet,” she said. 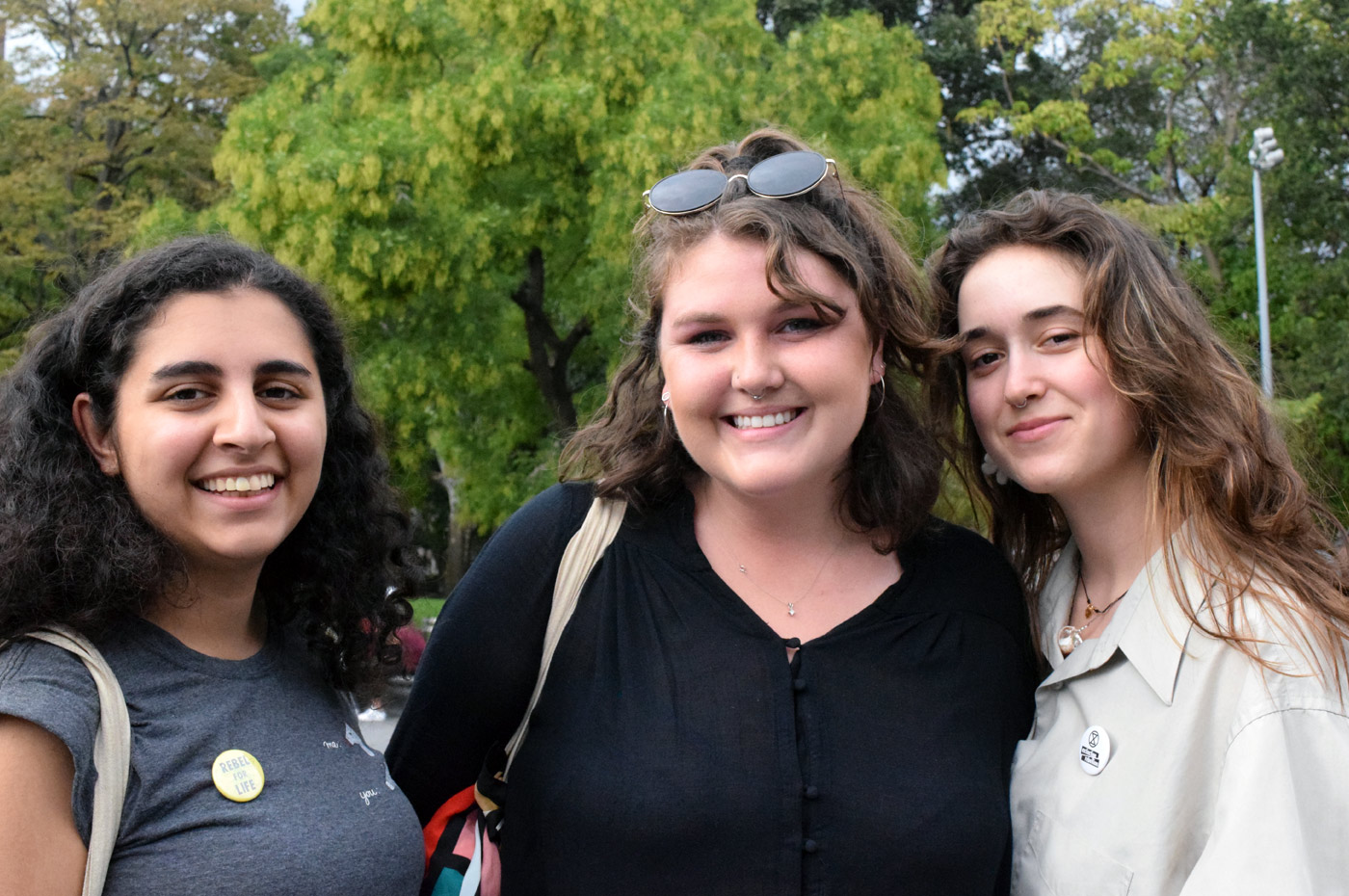 Sydney Jones, Alex Ellerkamp, and Megan Shoheili, students at the Pratt Institute in Brooklyn, came by the park after hearing about the morning’s protests on Wall Street. The students were a fan of RebelFest because, they said, it provides a platform for education, conversation, and building community. They said they approved of Extinction Rebellion’s tactics because more disruptive action can make a bigger difference. “Visually offensive stuff like the fake blood can make more of an impact,” Shoheili said.

All three also agreed that both the permitted marches of the youth climate movement and the civil disobedience of Extinction Rebellion are needed, because not everyone feels comfortable potentially getting arrested, “it sends a stronger message to march without a permit,” Jones said. “Why should we follow the rules, when lawmakers are ignoring the climate crisis?”

The most powerful tool for fighting climate change