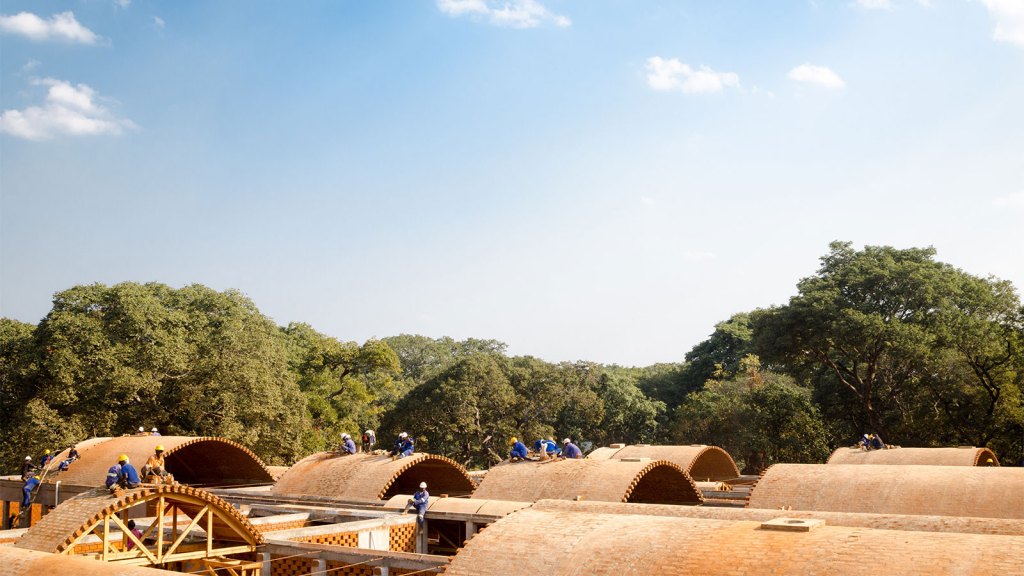 Only a few days left to Double your gift
This article is published in partnership with:

Over the next 40 years, the world is expected to see 230 billion square meters in new construction, according to the World Green Building Council. That’s the equivalent of adding another Paris to the planet every week. And buildings, behind their impassive facades, are veritable carbon faucets: The construction and operation of human-made structures is responsible for 39% of global carbon emissions. That’s more than double the figure for transportation, one of the most commonly cited culprits of climate change.

These numbers show the undeniable link between development and climate change.

And, as the COVID pandemic has demonstrated, the climate crisis tends to exacerbate longstanding public health and social justice issues. The construction industry, for example, has a longstanding problem with gender inequity in the workplace, a problem the pandemic may amplify for many women who are now expected to work and provide childcare. But COVID has also shown that large-scale change is possible and can happen quickly.

Addressing the climate crisis adequately will require problem-solving on multiple fronts. Low-carbon transportation, clean energy, land restoration, and improved agricultural practices will all help. But if the crisis is to be met with the seriousness it requires, climate resilience and equity will need to be built into as much new construction as possible.

“Ultimately, we want all new buildings to be net-zero carbon buildings,” says James Mitchell, co-founder and CEO of BuildX Studio, an up-and-coming design and build firm determined to disrupt the construction industry through radically improved sustainability strategies. It’s an ambitious goal, to be sure, and Mitchell admits it will take time. But his company and likeminded organizations around the world are making huge strides toward meeting this goal. And the chances of succeeding look to be increasing in a post-COVID world.

BuildX Studio was founded in 2016 by Mitchell and Carolina Larrazábal. Based in Nairobi, BuildX is a B-Corp, which means it is legally required to consider the impact of its decisions on its workers, customers, suppliers, and community, as well as the environment. It’s the first construction company in Africa to obtain this certification. That’s particularly important because Africa, whose population is projected to double by 2050, is a locus of new development.

BuildX is demonstrating the possibilities in sustainable design, with a focus on East Africa. The region’s booming urban centers, in particular, offer a chance for innovative firms to lead the way toward cleaner construction around the world. Current BuildX projects include a pre-primary and nursery school, an educational center for low-income youth, and a 250-unit housing development whose model can be reproduced throughout the region.

A primary aim for all BuildX projects is to move away from high-carbon methods and materials toward locally sourced, low-carbon alternatives. Another goal is to create opportunities for women in construction: Half of BuildX’s construction workers, and more than half of its office employees and leadership, are female.

“Sustainability” has been a buzzword in architecture circles for the past couple of decades. Typically, designers and builders use the word to refer to the energy efficiencies incorporated into new structures—strategically placed windows, energy-efficient lighting fixtures and appliances, water-saving plumbing fixtures, and the like. Design features like these are important carbon reducers, and many of them have found their way into building codes.

But there’s another aspect to sustainable architecture that’s ultimately just as important: reducing the carbon emitted during the building process itself. Called embodied carbon, this includes the extraction, fabrication, and transportation of building materials.

Take one of the most-used materials in modern construction: concrete. The primary ingredient in most concrete is a binder called portland cement. Portland cement is made by heating limestone and clay minerals to form a solid material called clinker, which is then ground into a powder. This process is relatively cheap but produces a massive amount of carbon—as much as 8% of total global emissions, by some estimates. If concrete remains a staple for new development, building construction will continue to be a heavy contributor to climate change.

“We don’t want to participate in the market; we want to disrupt the market,” Mitchell says.

BuildX is determined to upend the status quo by making buildings that minimize both operational and embodied carbon emissions. That means working on a timeline longer than any individual project—decades, rather than years, Mitchell says. For example, timber is less carbon-intensive than concrete or steel, but the timber industry in Kenya is not well developed. By constructing new buildings with imported timber, BuildX aims to help create a demand for locally sourced timber, with the goal of ultimately leading to a healthy forest economy in East Africa.

To move toward the net-zero-carbon goal, BuildX is introducing to East Africa a method of project delivery already common in the U.S. and Europe called “design-build.” Under this method, the design and building elements of a project are included under a single contract, with a single entity overseeing the process from concept to completion. This more streamlined process makes it easier for BuildX to implement its energy-saving design and construction solutions every step of the way, while empowering local communities whose members play critical roles in creating new buildings.

Take, for example, the Sachibondu Rural Health Centre, completed in 2019. More than 80 percent of the building materials were sourced or produced locally, including reclaimed timber and temperature-regulating blocks made by compressing on-site soil. This minimized the carbon expenditure from transporting materials. The project also employed 120 local workers, half of them women, paying fair wages and providing skills training. The hospital is now accessible to tens of thousands of people across Zambia, Angola, and the Democratic Republic of Congo.

The COVID-19 pandemic has brought into focus the potential for humans to dramatically change their collective behaviors, notes Mitchell. And that makes now the perfect time to drive toward positive change that would have seemed far-fetched even a few months ago. When it comes to construction, that could mean making the move to local builders and materials more practical than ever.

“We don’t want to sit back and hope a building leads to change,” Mitchell says. “We want to show people how to make that change for themselves.”