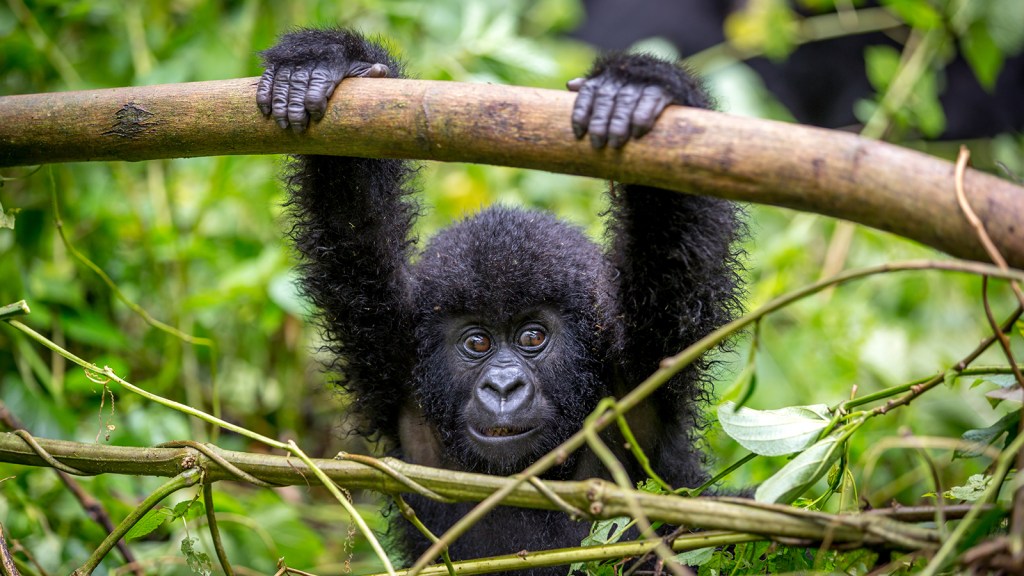 The Democratic Republic of the Congo has the blessing and curse of a wealth of natural resources, including copper, gold, coal, and crude oil. The country’s rainforests are also home to a whole lot of wildlife, including the elusive mountain gorilla.

On the one hand, valuable global commodities. On the other, ever-so-charming, 400-pound vegetarians that, over the long haul, have the potential to bring in more money to the country through tourism than the (often culturally exploitative) oil industry could.

The DRC’s history is complex, thorny, tragic, and gruesome, but here’s a slice of the backstory: The Congo was once the colonial property of Belgium. Really terrible things took place under Belgian rule, including slavery, plagues, and genocide.

But before the DRC, King Albert I did one important thing: Taking a wild guess that the temptation of resource extraction could wipe out the Congo’s land and animals, Albert founded Virunga as Africa’s first national park in 1925. UNESCO designated the area a World Heritage Site in 1979, largely because of its population of mountain gorillas.

While establishing the park didn’t keep more bad stuff from happening to the gorillas – like poaching, deforestation, and being caught in the middle of decades of violence between the Congolese army and militia groups – today Virunga still provides a refuge to key populations of the fewer than 1,000 mountain gorillas that remain. But environmental groups are worried that, if Big Oil has its way, Virunga’s gorilla population could continue to dwindle away.

Around 2007, only a few years after the Second Congo War ended in 2003, London-based oil company SOCO International fixed its sights on DR Congo’s petroleum. Seeing the potential for oil production as a way to bring money to a recovering, impoverished nation, the Congolese government granted SOCO oil concessions in areas along Virunga’s boundaries, and the company began to explore the oil resources there.

Thankfully, the public outcry at the thought of what nearby oil production could mean for the park and its endangered gorillas — driven in part by the Academy Award-nominated Netflix doc Virunga — caused SOCO to halt its oil explorations in 2014. (Nice job, Leo!)

The trouble is, SOCO stopped exploring after confirming that Virunga does indeed sit on top of a whole lot of oil — which makes the temptation stronger than ever. Who’s to say the Congolese government won’t grant rights to that oil to another company?

In November, Uganda, which also borders the park, announced it had accepted bids for six new oil contracts. One of these bids would allow drilling in Lake Edward — smack in the middle of Virunga National Park. Not only could this mean damage to the local ecosystem and people that depend on it — like the 200,000 fishermen who rely on Lake Edward’s stocks — it would effectively mean the end of the national park, since drilling for oil violates UNESCO’s world heritage standards. If the park was declassified, it could lose its value as a place worth protecting. And if that happened … would we still have DCR’s mountain gorillas?

Sorry, is all of this bumming you out? Here, watch this.

Now is the part where we tell you not to give up hope. After being closed due to violence, the park re-opened to travelers last year — and if people start returning, the economic benefit from ecotourism could well eclipse that from oil extraction in or near Virunga. Virunga’s rangers care about the park and its gorillas so much they are literally willing to give up their lives to defend it. And international NGOs are rallying to call upon UNESCO and the governments of the DRC and Uganda to reach an agreement to ban oil drilling that would affect the park.

Big Oil might be as dirty an enterprise as ever, but Virunga has a battalion of people who are willing to continue defending it, just as they’ve been doing for decades. Meanwhile, the mountains gorillas are still out there — still as swoon-worthy as ever — unknowingly awaiting their fate.

Join the fight to help save critical mountain gorilla populations and protect this precious landscape from destruction. Sign a petition sponsored by African Wildlife Foundation, the world’s leading organization working to protect African species, and take a stand against oil extraction in Virunga National Park.