Climate organizer K.C. Golden stood with his back to a sparkling Elliott Bay in Seattle today, hushed the elementary-school students crowding a stage with him, and pointed to the glass wall of the convention center next door.

“Here’s what’s transformational,” said Golden, of Climate Solutions. “The Environmental Protection Agency is in there working to be an agency that protects the environment. It’s that simple. Our leaders are leading.”

Inside, the EPA held a rather dry public hearing. Outside, a crowd of climate-action supporters cheered them onward. It was an odd rally, with as much praising of the government’s recent action as there was demanding of a new course. Organizers handed out postcards to urge the EPA to take action on global warming. Speaker after speaker told those gathered to stay vigilant. But the crowd sort of just wanted to party. For most of them, it could well have been the first political gathering of the Obama era, and the festive atmosphere reflected it.

“During the Bush administration, when every environmental protection was just turned on its head, you just lost heart,” said Diana Forman, 66, of Seattle. “Now we’ve got some heart back.”

There were corny chants, children in “Stop Global Warming” t-shirts, and people in animal costumes—salmon, polar bear, octopus, and crab. Like any good political rally, this one had its share of not-quite-on-message posters: “Legalize Hemp,” “Stop the Bloody Wars,” “Reverse heart disease by going vegan,” and “Biofuels = ‘Crime against humanity.’” But the organizers — Sierra Club, 1Sky, Earth Ministry, and others — helped ensure a more-or-less unified message on climate action.

“The EPA is taking this courageous step forward and we felt we needed to say, ‘We’re here with you. Regular people want this to happen,’” said Dan Ritzman, western director of the Sierra Club’s Beyond Coal campaign.

The “courageous step” was the EPA’s finding last month that greenhouse gases endanger public health and welfare, compelling the agency to regulate greenhouse gas-causing emissions under the Clean Air Act. The decision required the agency to collect comments from the public, so it held one hearing in Arlington, Virginia, on Monday and the second and final in Seattle today.

The first few hours of the 11-hour hearing had none of the energy of the rally outside, but the support for the EPA’s action was the same. Washington Gov.r Christine Gregoire (D) applauded the move and detailed the threats that a melting snowpack poses to Northwest agriculture, water supplies, and ski industries. A string of state and local officials gave similar testimony. A few echoed the widespread belief that emissions would be better handled by new legislation from Congress, not by regulatory action by the EPA.

“Those businesses that are truly honest in this debate already know that the greatest threat to industry is inaction and the destabilizing repercussions of that inaction, not comprehensive climate and energy policy,” said Jim Henna, director of environmental impact for Starbucks.

He called Starbucks an “agricultural company,” tied directly to the health of land and water.

“Simply put, we’re asking you to give us the tools to innovate,” he said. “We’re businesses—that’s what we do to survive and thrive. Set the guardrails and rules for us, give us a set of standards, and give us the certainty we need to forecast and invest. And we’ll solve this thing together.”

Outside at the rally, Golden thought attendees should know about the support corporations were showing for a climate plan.

“That old story about this being a tug of war between our economic future and our environmental future—that’s over,” he said. 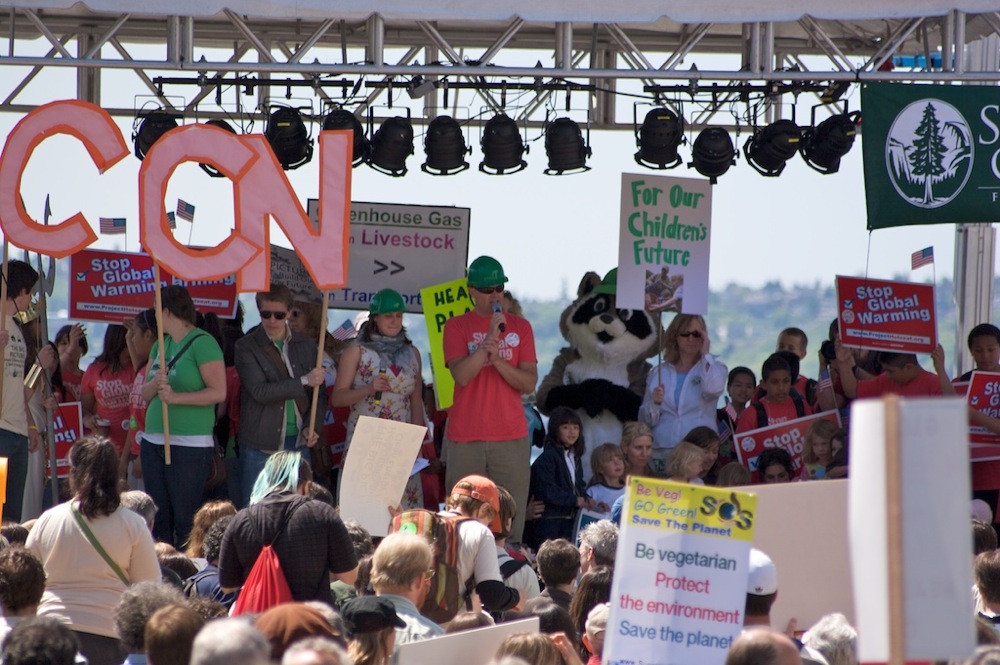 It was an unusual rally, with as much cheerleading of the government's recent action as there was demanding of a new course. Organizers handed out postcards to urge the EPA to take action on global warming. 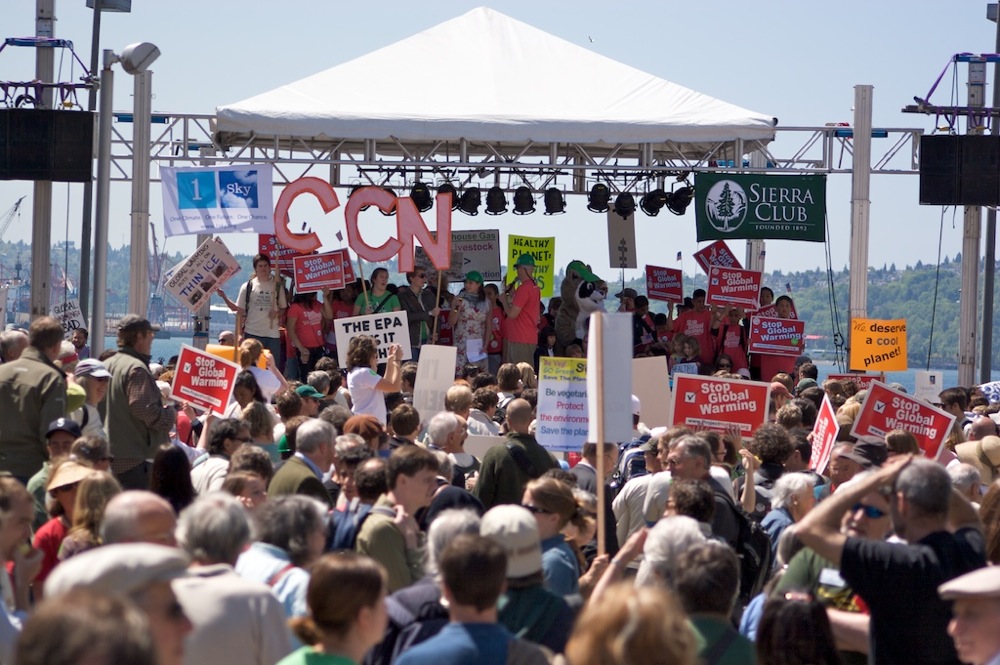 Speaker after speaker told those gathered to stay vigilant. But attendees sort of just wanted to celebrate. For most of them it could well have been the first political gathering of the Obama era, and the festive atmosphere reflected it. 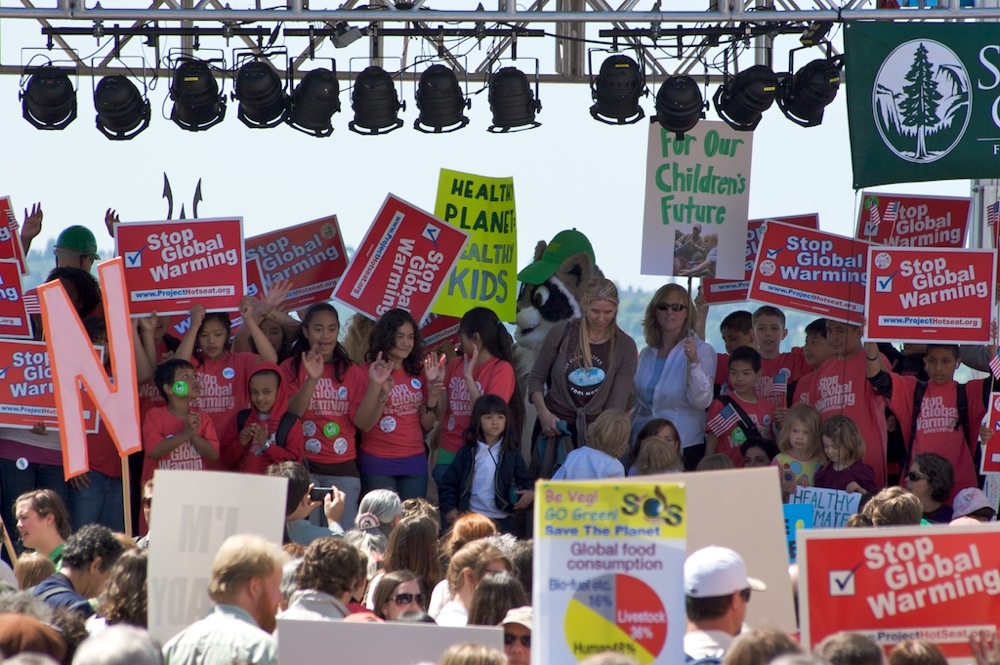 There were corny chants, children in "Stop Global Warming" t-shirts … 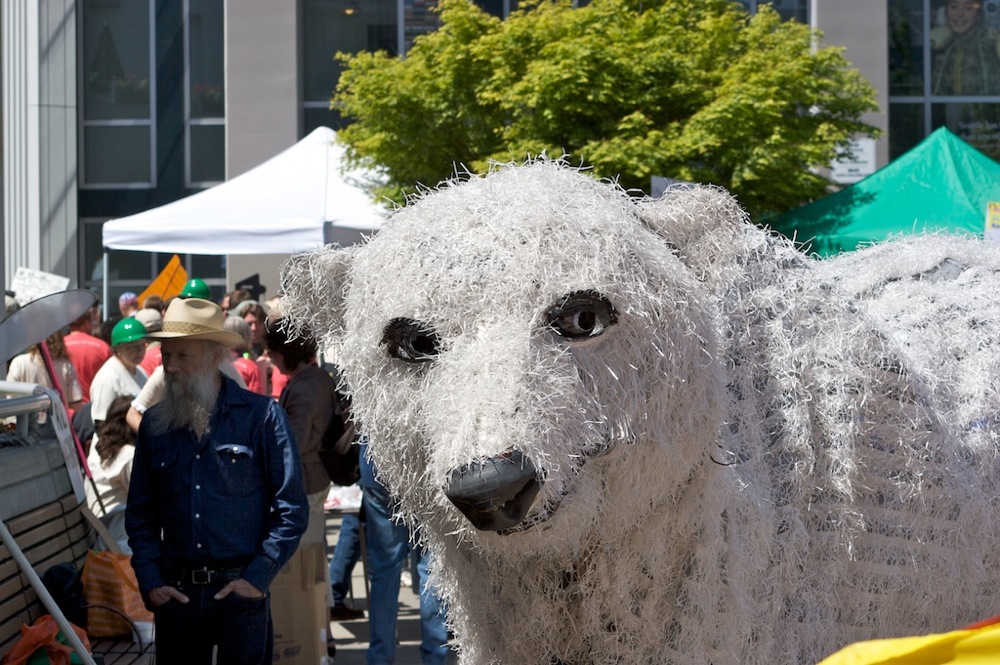 … and people in costumes — salmon, polar bears, an octopus, and a crab. 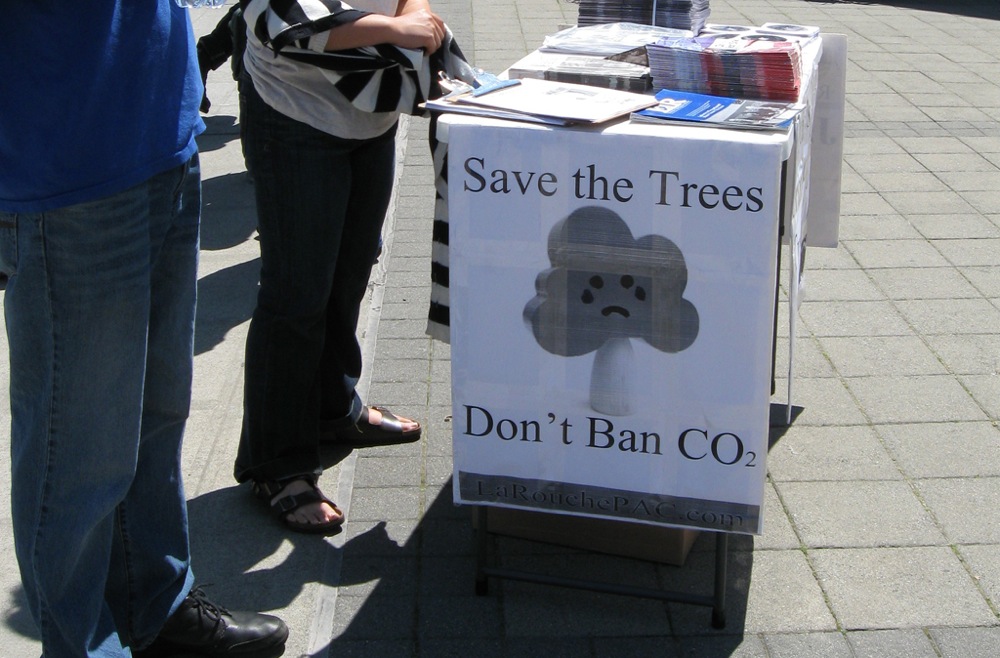 And of course, there was a small showing of skeptics on hand. 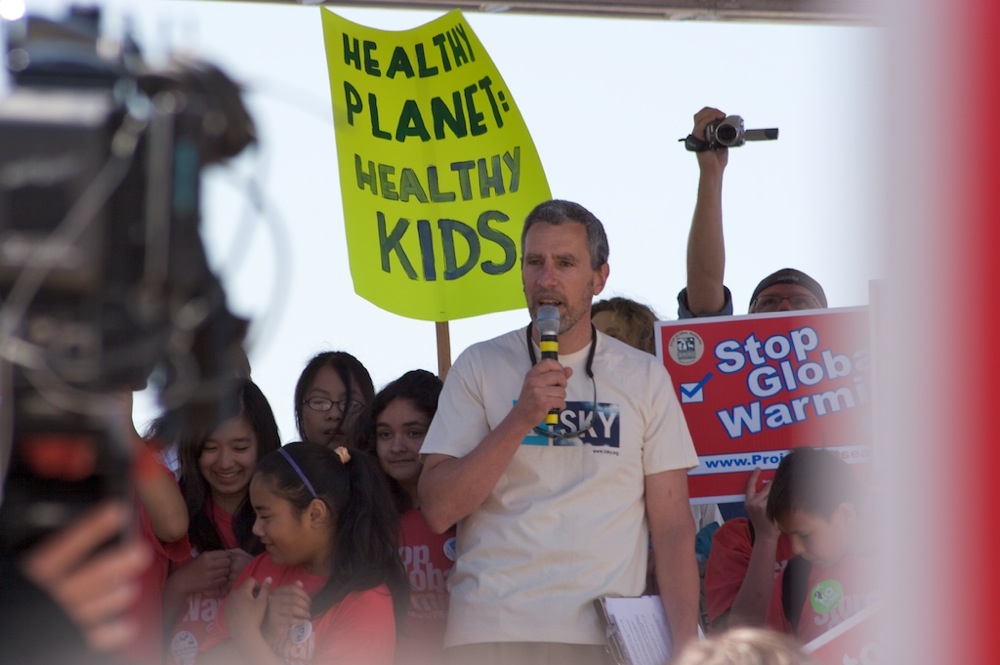 Organizer KC Golden riled up a swarm of climate-action supporters. 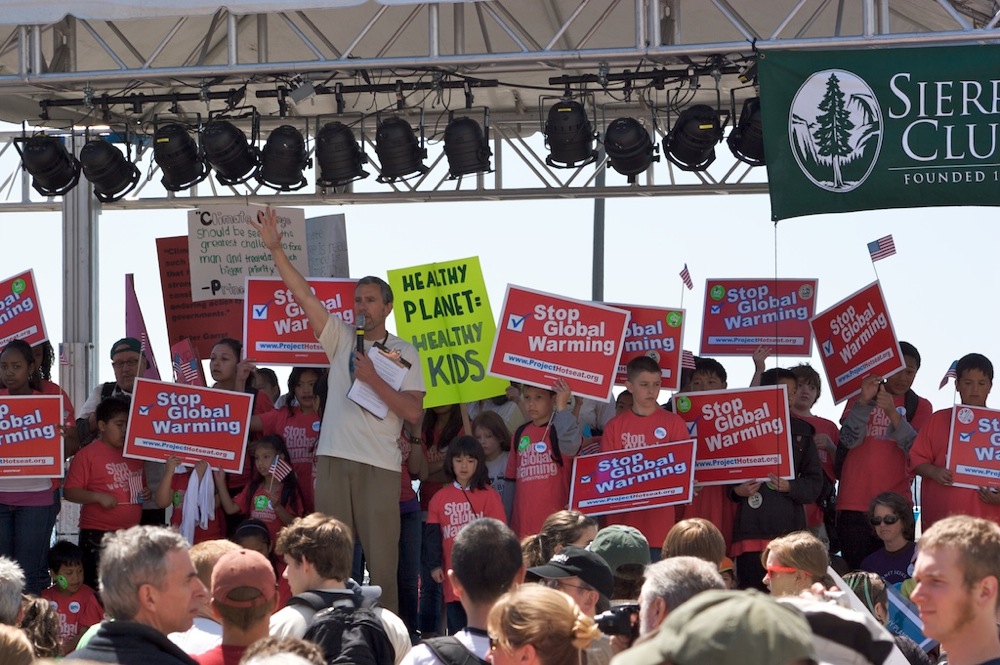 "Here’s what’s transformational," said Golden, pointing to the glass wall of Bell Harbor Convention Center. "The Environmental Protection Agency is in there working to be an agency that protects the environment. It's that simple. Our leaders are leading." 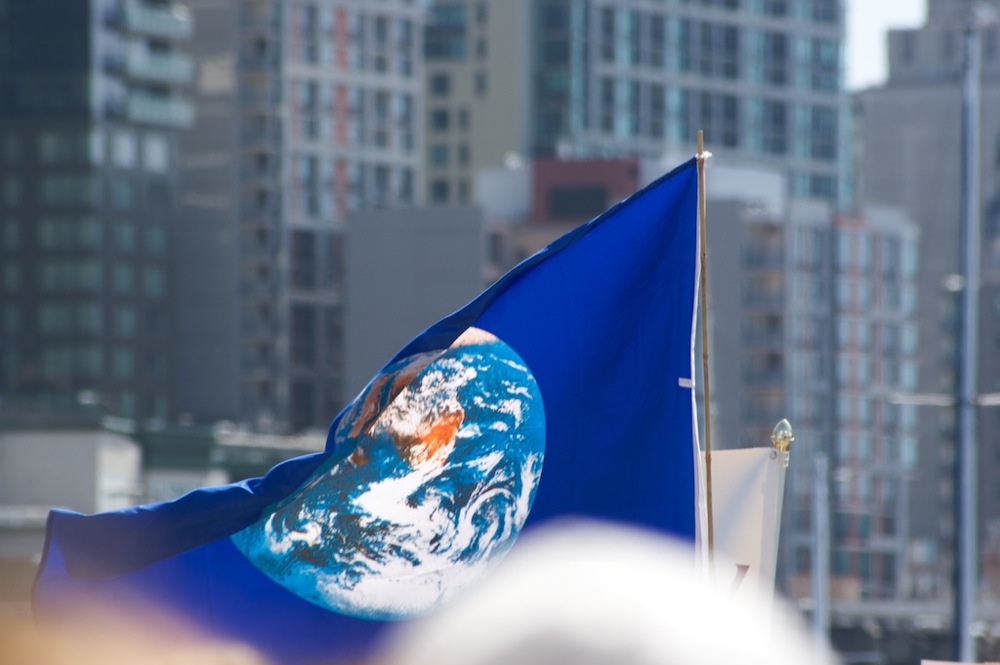 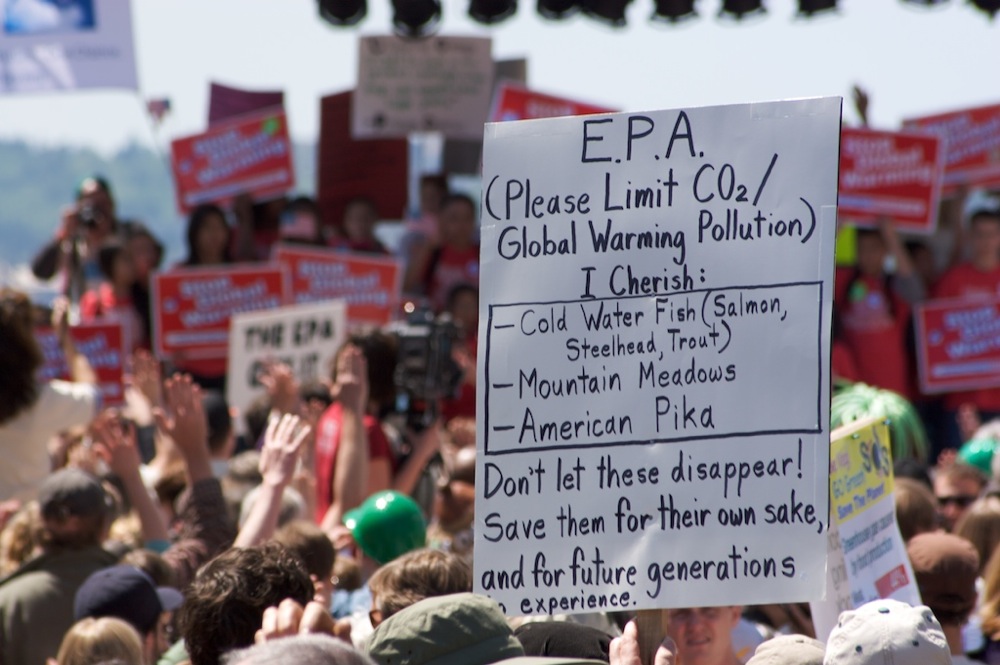 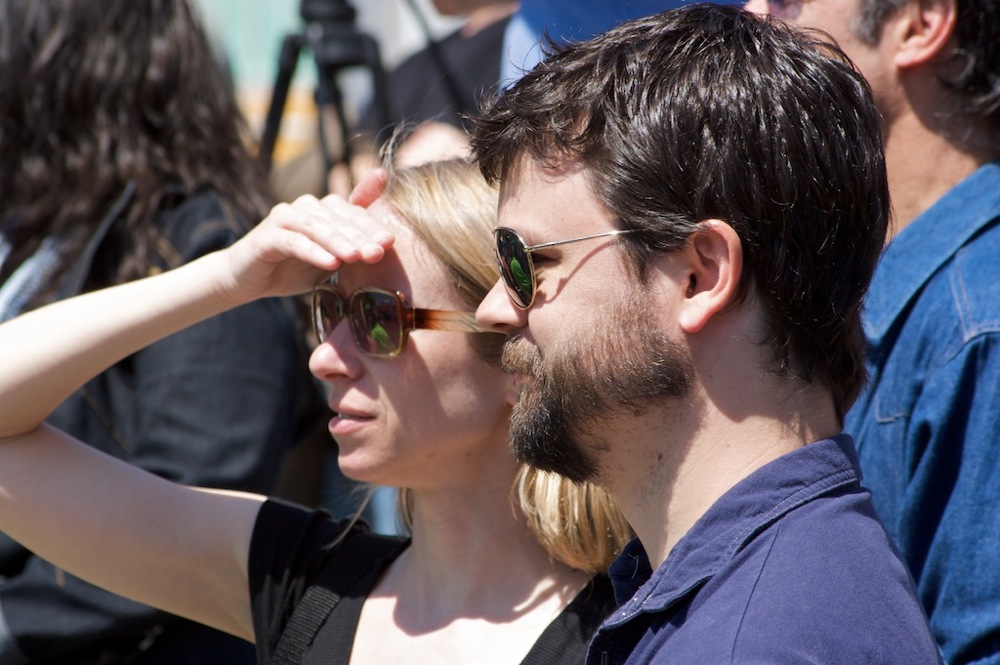 Grist Senior Editor Lisa Hymas and Staff Writer David Roberts take in the rally during a break in the EPA hearing. 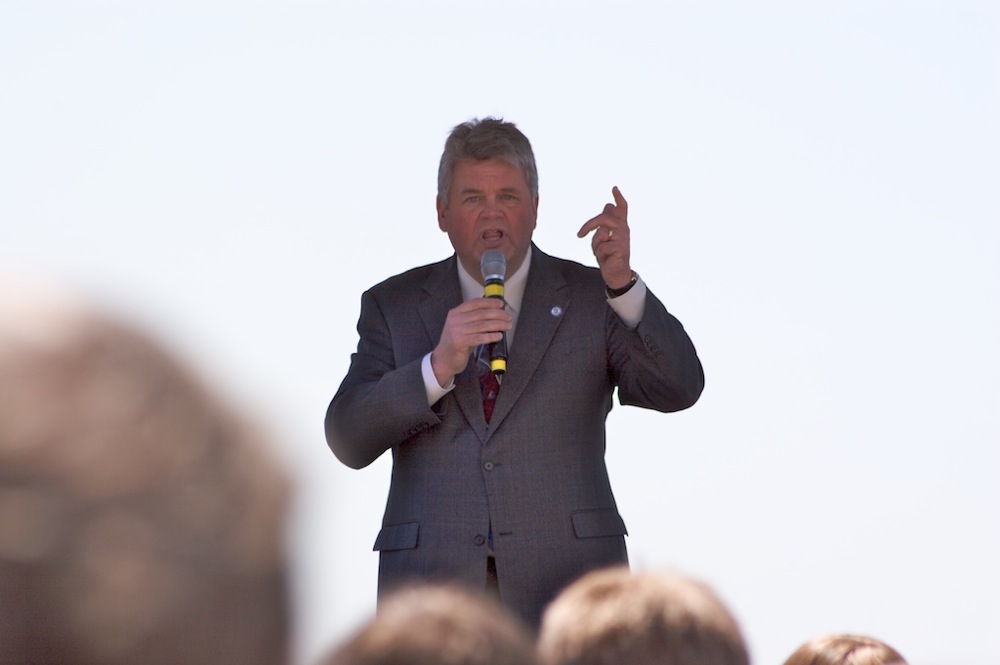 Seattle Mayor Greg Nickels addresses the crowd and trumpets the city's role as a leader in tackling the issues of climate change. 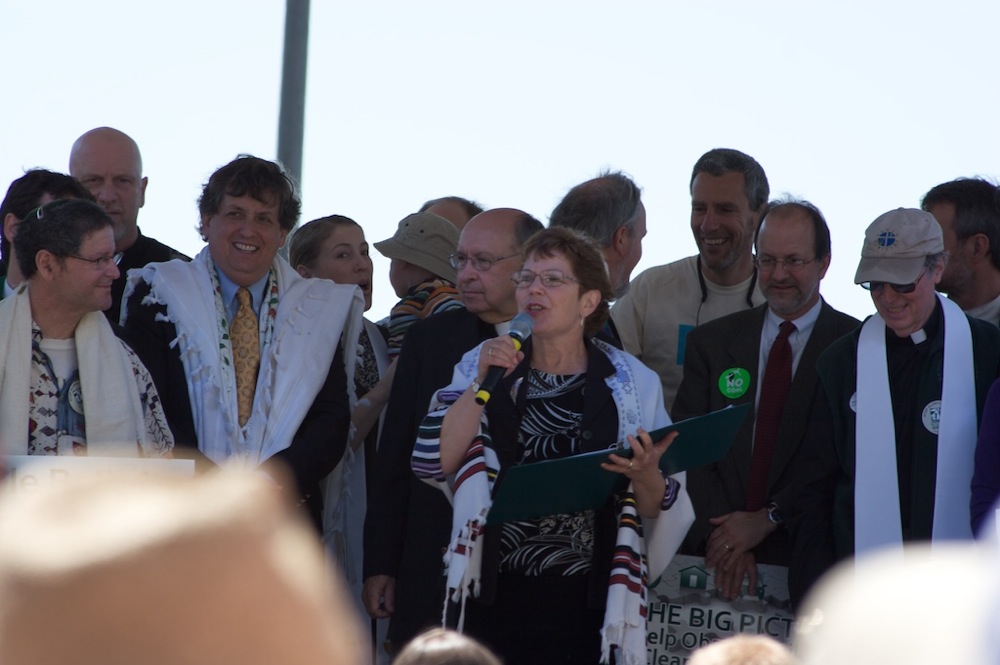 Religous leaders from Earth Ministry take the stage with Rabbi Zari Weiss of Rodef Tzedek and the Jewish Climate Challenge. 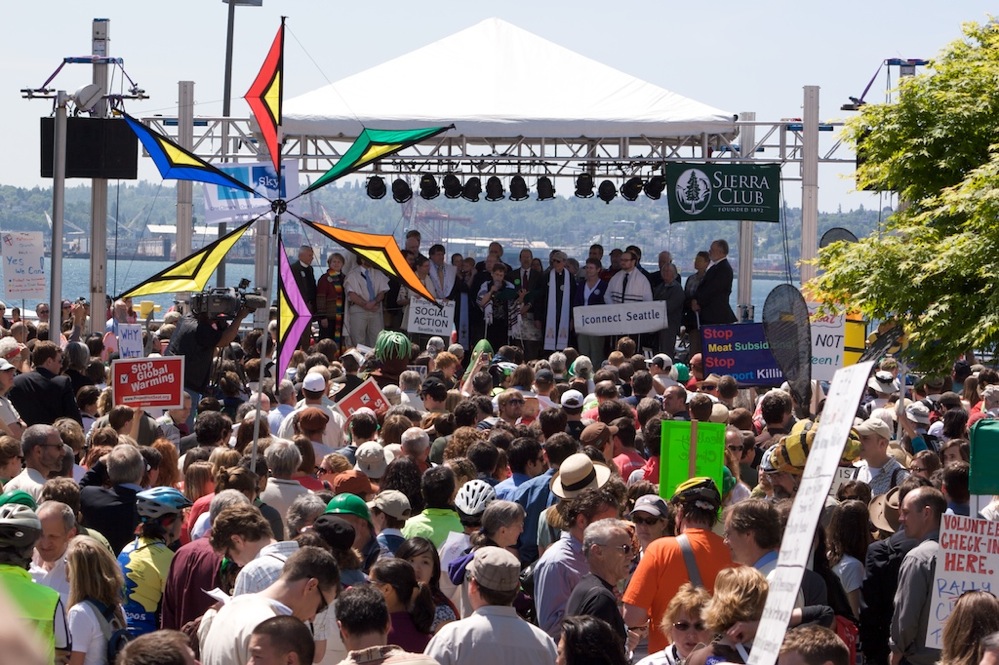 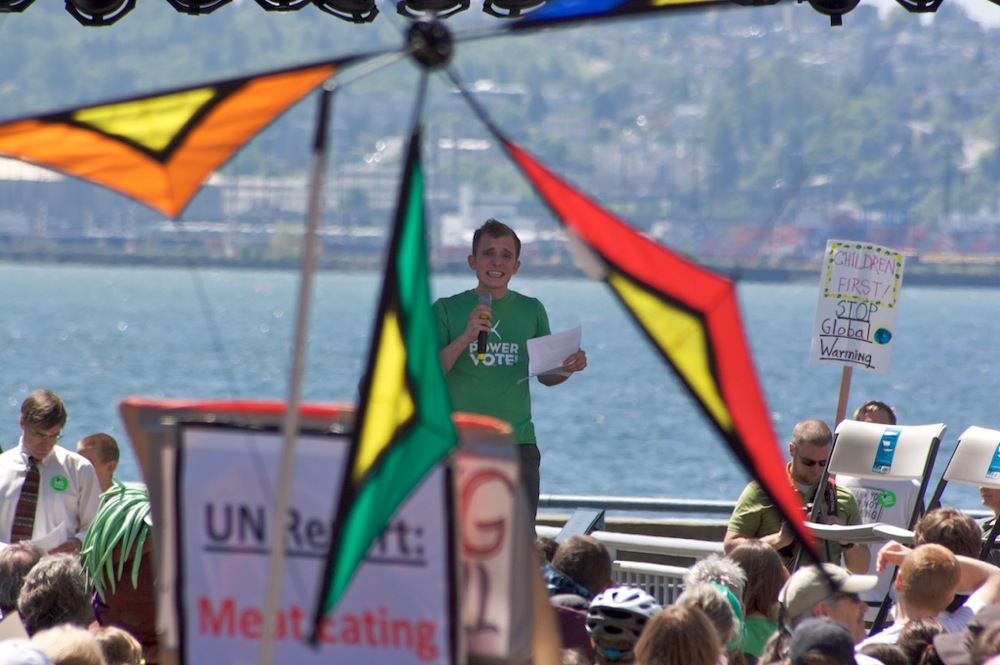 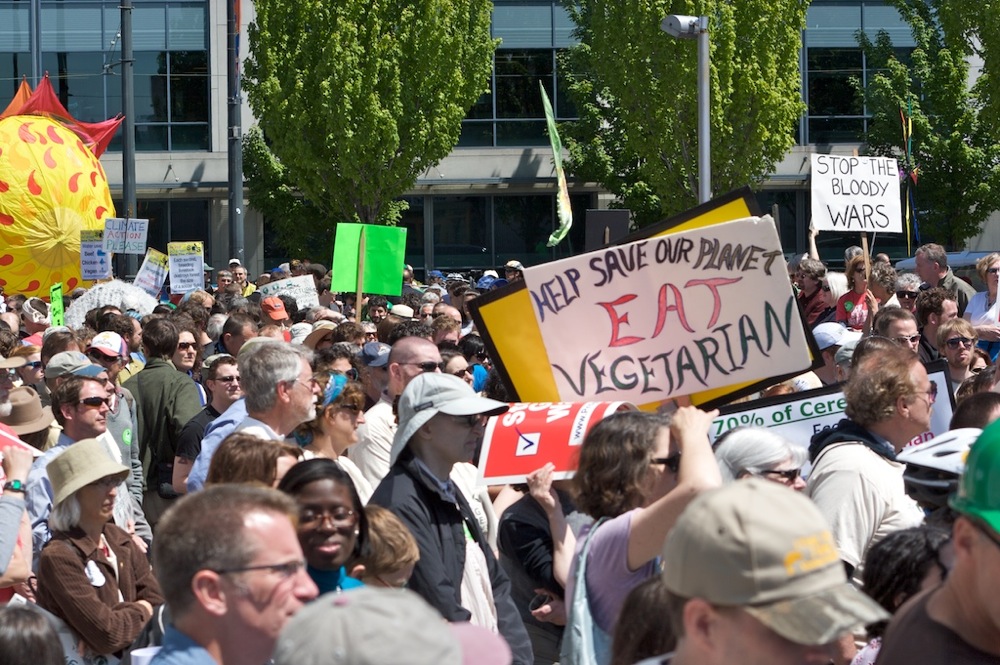 Like any good liberal rally, this one had its share of not-quite-on-message posters: "Legalize Hemp," "Stop the Bloody Wars," "Reverse heart disease by going vegan," and "Biofuels='Crime against humanity.'" 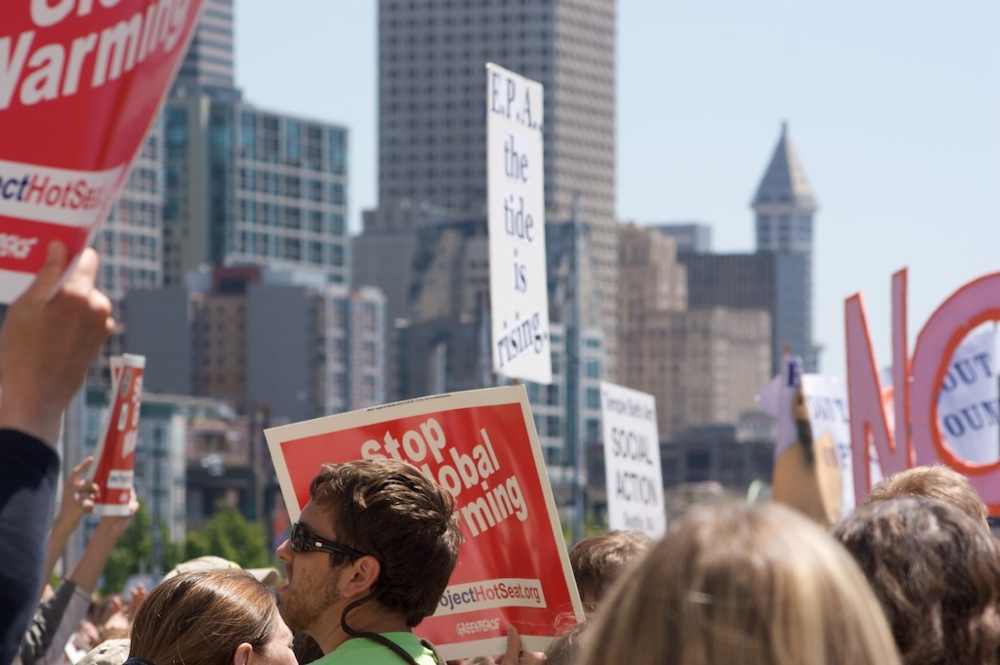 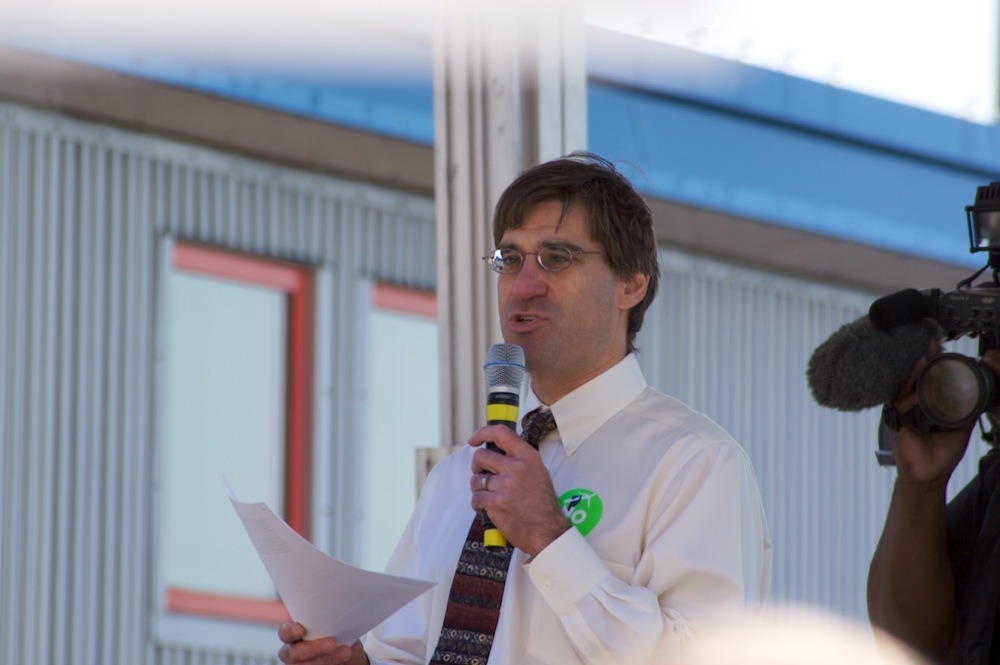 Dr. Evan Kanter, president of Physicians for Social Responsibility, reminds the crowd about the health problems the world is already seeing due to climate change. 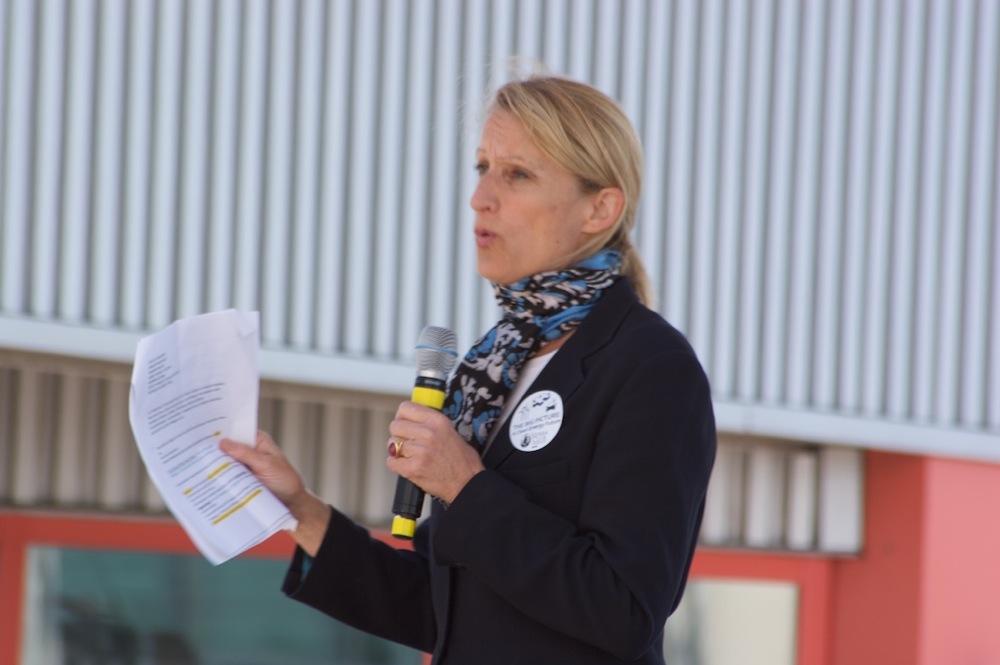 Martha Kongsgaard, environmental and community leader, talks about climate activism in the context of a friendlier administration. 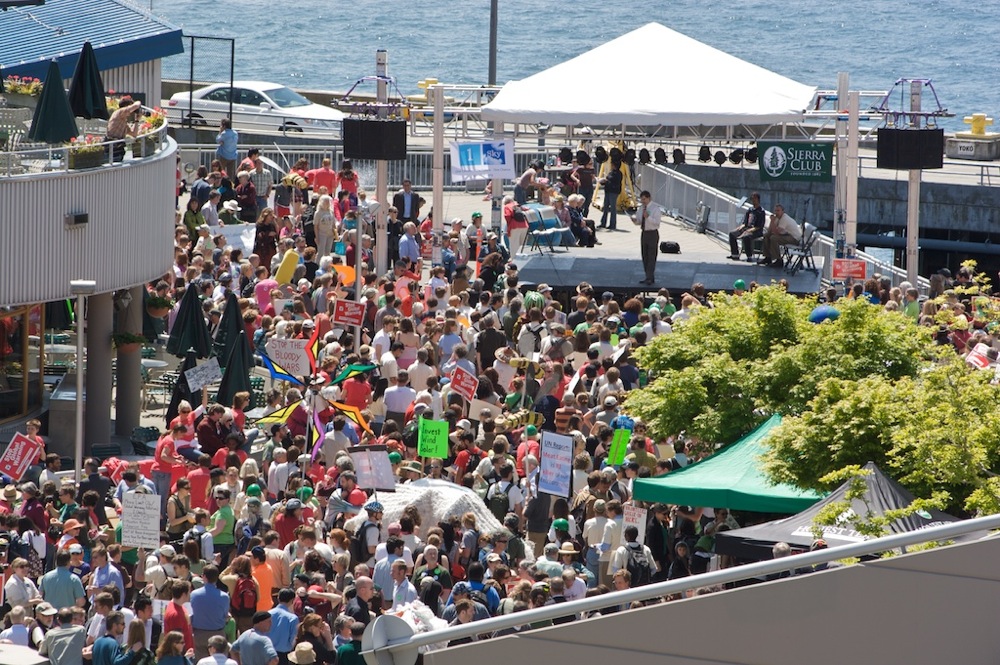 The clear sky and the view of the Olympic Mountains over Elliot Bay didn't hurt the vibe. 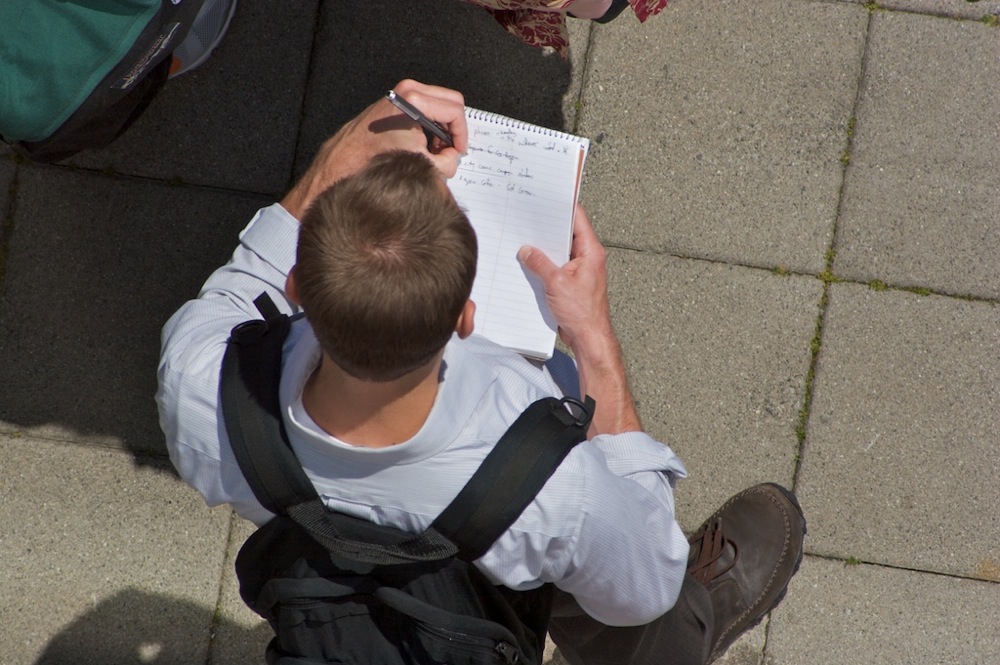 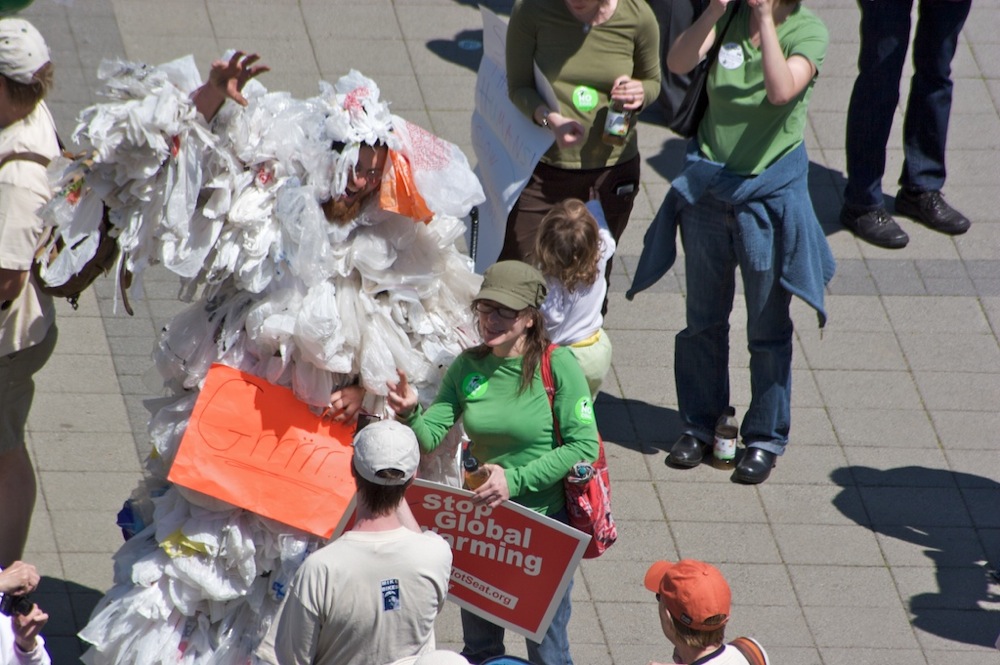 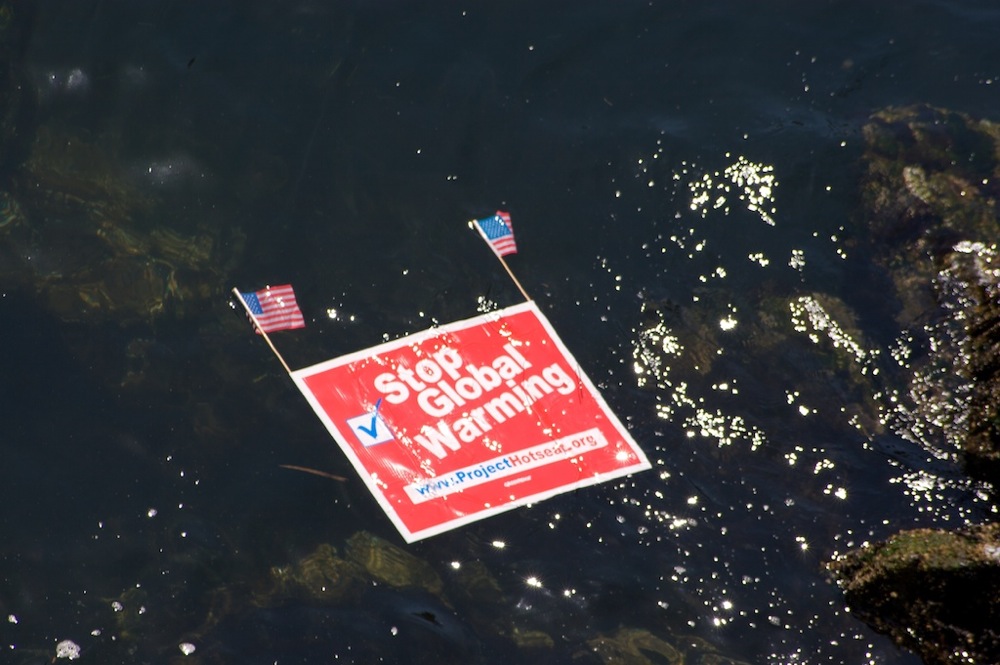 No symbolism here … just the wind.