On Thursday the Obama administration released its annual Economic Report of the President, which assesses the nation’s economic progress, the challenges ahead, and the administration’s domestic and international priorities. There is a meaty chapter on “Transforming the Energy Sector and Addressing Climate Change” (PDF).

Its most striking feature is that it doesn’t back off, at all, on the priorities Obama identified during his campaign: investing in clean energy, implementing a market-based system to reduce carbon pollution, and working to forge international cooperation on climate change. In fact, it’s one of the most cogent presentations of the president’s energy thinking I’ve seen.

The chapter begins on a somewhat academic note, arguing for why public policy is justified in the face of climate change:

… two market failures provide a motivation for government policy. First, greenhouse gas emissions are a classic example of a negative externality. As emitters of greenhouse gases contribute to climate change, they impose costs on others that are not taken into account when making decisions about how to produce and consume energy-intensive goods. Second, the development of new technologies has positive externalities. … the developers of new technologies generally capture much less than the full benefit of their ideas to consumers, firms, and future innovators, and thus underinvest in research and development. [p. 236, my emphasis]

If the two principal market failures are underfunded research and unpriced carbon, the task for public policy is to fund research and price carbon, and that’s what the administration says it is focused on. (The third leg of the climate policy stool, regulation, goes unheralded as usual, though there’s plenty about specific regulations in the report.)

Many progressives (including greens) have been disappointed in the Obama presidency, perhaps overly so. One thing that’s obscured the administration’s accomplishments is that many of them were lumped together under one bill, the American Recovery and Reinvestment Act, which came to be discussed as “the stimulus” and got mired in generic arguments about fiscal policy. Inside that act, however, was not only one of the biggest middle-class tax cuts of all time, but a whole bundle of investments in progressive priorities. Here’s how ARRA’s energy-related investments add up, according to the Economic Report of the President:

The Recovery Act is investing in 56 projects and activities that are related to transitioning the economy to clean energy. Forty-five are spending provisions with a total appropriation of $60.7 billion, and another 11 are tax incentives that the Office of Tax Analysis estimates will cost $29.5 billion through fiscal year 2019, for a total investment of over $90 billion.

Ninety billion for clean energy in the first year of the administration ain’t too shabby.

How did that $90 billion break out? The answer here is actually much more heartening than I realized:

Again: not too shabby.

The problem on the investment side is that the bad economy has the public nervous about spending. In a sane world, elites and journalists would help educate the public that the federal budget is not like a household budget, and that spending — to boost demand and soak up idled capital and labor capacity — is an appropriate federal response to high unemployment. Instead, elites and journalists help fuel the myth that the government should “tighten its belt” because the long-term deficit picture is grim. Indeed, Obama himself is helping to fuel the myth by indulging it.

In that political environment the administration is unlikely to get anything like a second recovery package. And it’s unlikely to make the case for maintaining and elevating the level of investments in ARRA. It’s allowing the stimulus to be defined as a one-time thing instead of the beginning of an ambitious, historic effort to spur a clean energy economy.

Putting a price on carbon

As it always has, the administration retains its support for a market-based mechanism to incorporate the social costs of carbon pollution. Two things in this section are notable though.

First, the report specifically singles out for praise the American Clean Energy and Security Act (ACES) passed by the House last year. For reasons having entirely to do with the, er, behavioral quirks of U.S. senators, the House bill has come to be seen as a piece of radicalism. Republicans and conservadems aren’t clear on what they want, but they know they don’t want to vote for that bill. The report shows how silly that myth is; as it notes, several independent analyses of the bill show that its benefits will be large and costs relatively small.

Maybe I’m projecting, but I like to see this as a high-five from the White House to Pelosi, Waxman, and Markey, who did yeoman’s work passing a responsible piece of legislation and have gotten nothing but grief for it ever since.

The second item of note is that the report takes care to explain that a utility-only cap-and-trade system (of the kind implemented in RGGI and now being discussed in the Senate), far from saving money, would cost more:

Costs are also affected by the number of industries covered by the cap, with the general principle being that greater coverage lowers the marginal cost of emissions reductions. A recent study comparing alternative ways to achieve a 5 percent reduction in emissions found that the cap-and-trade program’s costs to the economy were twice as large when manufacturing was excluded as they were under an economy-wide approach (Pizer et al. 2006). [p. 253, my emphasis]

As I said in an earlier post, this is another area where the purported motive for weakening the bill — to spend less, to be more fiscally responsible — achieves the opposite. A weaker bill is more expensive, not less.

Ultimately the administration can’t determine the shape of the bill and hasn’t shown much appetite for twisting arms. But what it does do quite well in this report is explain and substantiate its own policy preferences.

It puts a dollar number on U.S. subsidies: “In the United States, these subsidies—including tax credits, deductions, expensing practices, and exemptions—are worth about $44 billion in tax revenues between 2010 and 2019.” It’s worth noting that a recent report from the Environmental Law Institute put the figure somewhat higher — $70.2 billion between 2002-2008: 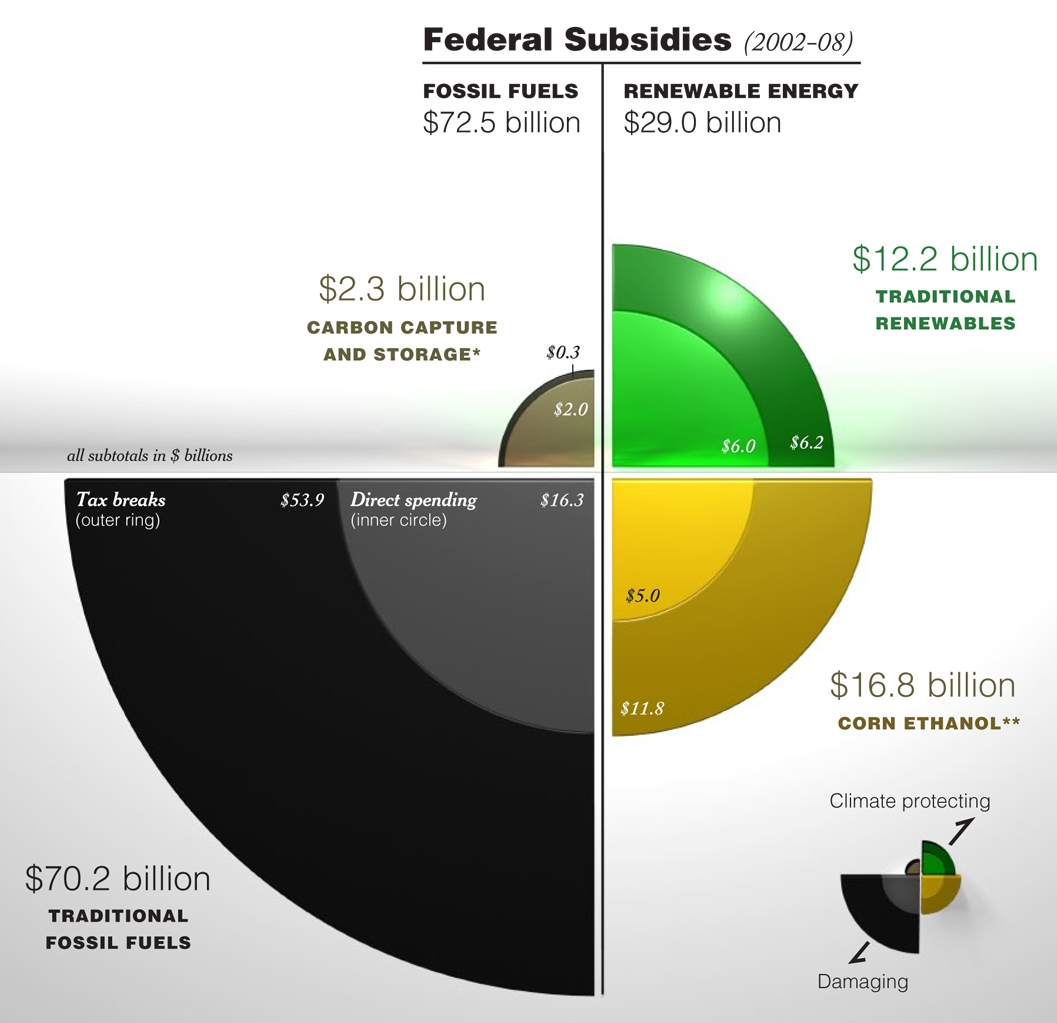 Importantly, the report also quantifies the level of emission reductions this policy will achieve:

One model estimates that eliminating fossil fuel subsidies in the major non-OECD countries alone would reduce greenhouse gas emissions by more than 7 billion metric tons of CO2-equivalent, enough to fulfill almost 15 percent of the agreed-upon G-8 goal of reducing global emissions by 50 percent by 2050 (Organisation for Economic Co-operation and Development 2009). [emphasis mine]

Fifteen percent of the 2050 target is nothing to shake a stick at. Eliminating fossil fuel subsidies is the kind of policy that, should Congress fail to pass climate legislation, the administration can take to international climate talks as quantifiable evidence of its efforts.

Honestly, I’ve been wondering why this tough talk about eliminating subsidies hasn’t been getting a bigger reaction from the fossil fuel lobby. I’ve seem some ritualistic denunciations of “new taxes,” but nothing like a full-court press. Do they just not believe it will happen?

Given the Democrats’ limited ability to transform plans and principles into legislation thus far, perhaps Big Oil is wise to be cynical. When it comes to domestic policy, it doesn’t matter all that much what the executive branch thinks. In the end, the administration’s economic report does little but reinforce yet again how nice it would be if the U.S., like most developed democracies, had a parliamentary system of government in which majority parties with popular leaders could actually implement policy. Wouldn’t that be something?