4 indigenous leaders on what Bolsonaro means for Brazil 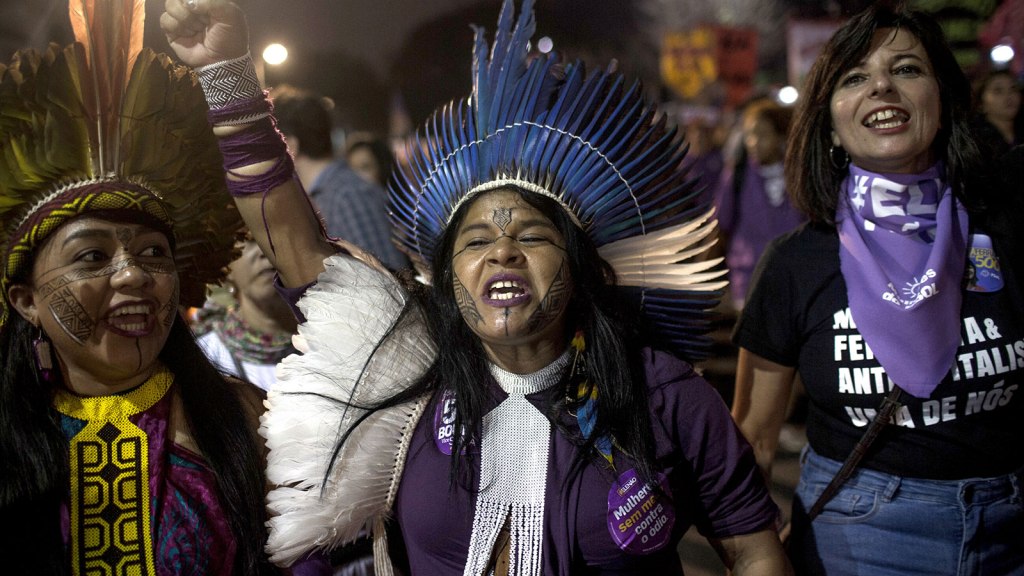 4 indigenous leaders on what Bolsonaro means for Brazil

Even before Jair Bolsonaro won Brazil’s Presidential race last week, many environmentalists were on high alert. The far-right politician’s positions on agriculture and economic development (he’s gone back and forth on whether he’ll keep environment ministries and agriculture ministries separate) could open up Brazil’s precious rainforests to deforestation and economic exploitation.

But it’s not just the Amazon that’s threatened — the lives of many of Brazil’s indigenous peoples are under siege as well. A little over a week ago, the President-elect signaled he  might backtrack on his campaign promise to leave the Paris climate accord, but only if he gets assurances that Brazil would not have to cede sovereignty to native tribes.

“Indigenous peoples suffer disproportionately from violence,” Christian Poirier, program director at Amazon Watch, told Grist. “Under Bolsonaro, we can expect to see a growth in this very alarming trend.”

In the first few days after Bolsonaro’s election, there were reports of a wave of violence against indigenous communities, with pro-Bolsonaro militias allegedly destroying villages and gravely harming individuals.

“It sends signals that the murder and intimidation carried out by actors and gunmen against land defenders will not only be tolerated, but it will be a climate of impunity,” Poirier said.

Here’s what four Brazilian indigenous leaders had to say to Amazon Watch about how Bolsonaro’s election is impacting their communities. These quotes have been edited for length and clarity.

This scenario is totally heartbreaking. Bolsonaro has made clear and consistent declarations about ending the titling of indigenous lands, which are completely opposed to our rights. His racist, homophobic, misogynist, fascist discourse shows how Brazilian politics will be in the coming years.

Our fear is that this situation will worsen. He foments hatred and violence against indigenous peoples with a discourse claiming that we are an obstacle for development, ignoring our contributions to environmental balance. We know our titled territories help to climate stability and that our preservation of these ecosystems offers collective benefits.

His discourse gives those who live around indigenous lands the right to practice violence without any sort of accountability. Those who invade indigenous lands and kill our people will be esteemed. He represents an institutionalization of genocide in Brazil.

We will resist his hate by protesting in the streets and by filing lawsuits, despite the fact that the courts have unfortunately not fulfilled their duty to uphold our constitutional rights. We will fight as we have for the last 518 years, waging resistance to guarantee our existence.

We are very worried. We Munduruku people need our land to be titled. When the President says he will not title one centimeter of indigenous land, it hurts those of us who have long fought to defend our territories from the invasion of loggers and miners. When he talks of ending the ability of [environmental enforcement agency] IBAMA to issue [environmental] fines and prohibits federal police from accompanying their inspection actions we suffer and are scared to even leave our homes.

When the president says he will end human rights, what will happen to us? We cannot be held hostage by fear. We indigenous peoples in the movement need to think of everyone because our struggle is for everyone. We cannot retreat from this challenge but only advance. We must walk together to defend the Amazon, and Mother Earth who is calling for help.

The destructive agenda announced by Jair Bolsonaro is highly aggressive to all those who struggle for justice, especially for the most vulnerable population. We indigenous people have resisted for 518 years to overcome the colonial structure and we will continue to be resolute in our struggle for our right to exist as original peoples. Our work to demarcate our territories will continue to be urgent and we will not desist. This is our struggle!

In following this election one thing we’ve noted, from the declarations of many indigenous leaders, is that our struggle continues. Indigenous peoples and traditional communities have lived in this resistance for a long [time]. For many years, I’ve monitored the encampments of the Guaraní-Kaiowá and Terena peoples who face violence [on a daily basis] from farmers and their armed agents, who disrespect their rights and can attack at any moment.

For us indigenous peoples this election represents a continuity of our struggle and encourages us to do what we have always done in defense of democracy and our rights. Today, these rights appear more threatened in every space, from our villages to our cities to our institutions.

We understand that this was an electoral process where people voted [Bolsonaro] into power. But he is not simply a presidential candidate. He sharply represents the profile of the majority of Brazilians who see in him their own representation. His discourse of racism, sexism, and violence is very prevalent in the people and especially relates to indigenous peoples, who they do not accept.