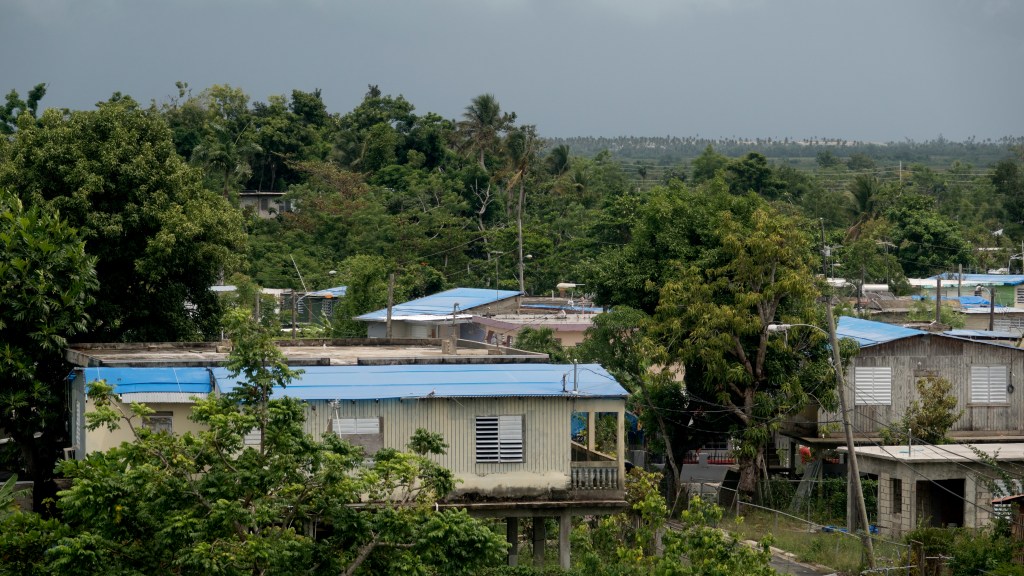 Tropical Storm Dorian skirted Puerto Rico’s western corner on Wednesday, before heading north towards Florida, where it is expected to develop into a Category 3 hurricane. While the storm spared Puerto Rico of much damage, it raised attention to how the island is still in recovery mode — and ill-equipped for another natural disaster.

Hurricane Irma struck Puerto Rico in early September 2017. Two weeks later, on September 20, Hurricane Maria made landfall in the municipality of Yabucoa. When the debris settled, almost 3,000 people were dead, thousands more were displaced, and the island’s already aging infrastructure was severely weakened. The island’s antiquated power grid, which had been neglected for years, took an especially hard blow. Immediately after the storm, at least 1.5 million people were left without electricity, some for almost a year, casting the island into the longest blackout in U.S. history.

Efforts to rebuild the island have been slow, stymied by a mixture of colonial exploitation, government bureaucracy, partisan politics, civil unrest, and a president who’d rather blame Puerto Rico for inconveniencing him with another hurricane rather than providing actual leadership.

As Puerto Ricans prepare themselves for another hurricane season, under shifting local leadership and in a world with increasingly unstable weather, here are five numbers that highlight just how vulnerable Hurricane Maria left the island:

That’s how much former Governor Ricardo Rosselló estimated it would cost, in a report he filed to congress last August, for the island to fully recover from Hurricane Maria and Irma’s destruction. The former governor sought money from the federal government as well as foundations, other nonprofits, and Puerto Rico’s general budget to help cover this hefty cost. The federal government allocated not even half of that, only $42.6 billion, for rebuilding efforts, according to federal data. And Puerto Rico has received only $13.8 billion so far.

According to Rosselló’s report, approximately 90 percent of the island’s nearly 1.23 million households asked for relief and housing assistance from the Federal Emergency Management Agency immediately after Hurricane Maria. Seventy-eight percent of those households experienced damage to their home’s structure. FEMA provided blue tarps to residents whose roofs had been torn off by the storm, and today, the tarps are still widely visible on the island. Around 30,000 households still take shelter under these tarps instead of permanent roofs, AP reporter Danica Coto told PBS Newshour this week.

While Puerto Rico’s population was declining long before Hurricane Maria made landfall, the storm accelerated an exodus of people moving off the island, many to the United States mainland. According to a report by the Center for Puerto Rican Studies at Hunter College, between the time right before the storms to the end of this year, Puerto Rico may lose more than 470,000 residents, or 14 percent of its total population. This depopulation has severe impacts on the island’s economy, causing a shortage of school-aged children, an aging population, as well as a loss of the island’s most educated people in a phenomenon known as “brain drain.” According to Roselló’s report, this continuing loss has “added to the stress on [Puerto Rico’s] economy and created a shortage of professional workers in many sectors.”

It is estimated that Hurricane Maria and Irma damaged anywhere between 20-40 million trees, causing serious environmental harm. In his recovery plan, Rosselló said at least 2.4 million trees needed to be replanted throughout the island to undo many of these negative impacts, including landslides which he said had increased by the “tens of thousands,” as well as serious threats to ecosystems. According to a 2018 report by the National Aeronautics and Space Administration, the damage to Puerto Rico’s forests had far-reaching effects:

Trees stabilize soil on slopes with their roots. The loss of trees, plus the accumulation of downed branches, can contribute to landslides, debris flows, and increased erosion. Those problems can, in turn, lead to poor water quality in streams and rivers where excess sediments build up.

24% of communities with poor communication

During Hurricane Maria, many people couldn’t call 911 because both cell and landline services weren’t working, and they couldn’t be reached by family members on the mainland who were trying to help. As of last June, 24 percent of municipalities on the island reported that half or less of their community still did not have cell phone or landline coverage. As of this week, according to the New York Times, “the government has not purchased the technology that would allow a 911 dispatcher to pinpoint a caller’s location, and has not replaced the dozens of dispatchers who have quit and left the island since 2017, according to Aramis Cruz, president of the local union.”