A David and Goliath Fight to Tap World Class Solar 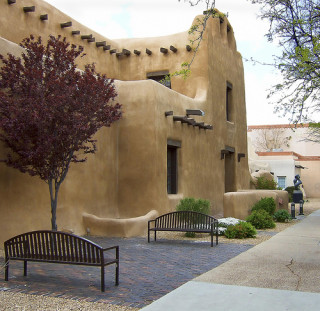 A David and Goliath Fight to Tap World Class Solar

“It’s the most inspirational work that I’m doing…this is an inspirational and aspirational effort…at the heart of it is love of place and energy democracy.” Mariel Nanasi and the citizens of Santa Fe, NM, are exploring the economic and environmental benefits of more local and locally-controlled energy production.  Is their city ready to take the lead?

Find out in this interview with Mariel, Executive Director of New Energy Economy, recorded via Skype on November 22, 2013.

A Failure to Take Advantage

The incumbent electric monopoly serving Santa Fe, Public Service Company of New Mexico (PNM), gets just 1% of its energy from solar in a state that some call the “Saudi Arabia of solar.” The result is a citizen-driven movement to explore a city-owned utility, and to make the most of the local renewable resource.

Mariel says, “I look at my kids in their eyes.  I don’t say ‘you have so much potential’ and leave it at that.  I want them to maximize their potential….We have abundant solar and wind resources in New Mexico.  The incumbent monopoly has failed to take advantage.”

New Energy Economy commissioned a study to see what would happen if the city, becoming the electric utility, did take advantage of its local resource.  The results are remarkable.

In a study released in December 2012 and benignly titled “Preliminary Economic Feasibility Assessment of a Publicly-Owned Electric Utility for the City of Santa Fe and Santa Fe County,” the city learned that an energy switch to public power could be momentous:

As Mariel says, the study says Santa Fe has “the potential to create leading edge innovations in energy efficiency and renewable energy and related economic development.”

Lessons from Las Cruces: A David and Goliath Fight

The first is the local water utility, which “highlights our ability to put our values to work.”  The city purchased the water utility from a private monopoly 10 years ago and it is now “one of the most respected water utilities in the country” for its efforts on conservation and furthermore, “It is profitable for the city of Santa Fe.”

The second is a failed attempt to municipalize the electric utility in nearby Las Cruces.  After a 10 year effort, the bid to take over the electric system from El Paso Electric failed by a single vote in the 1990s, after the incumbent corporate utility helped finance the successful campaign of a city council candidate who voted against the last $30 million appropriation necessary to complete the deal.

The lesson from Las Cruces, according to the lawyer that represented the city, is that the question of municipalization is not about which entity is better – that’s self-evident (see the study) – but ‘is there sufficient political will to fight the incumbent monopoly?’

“PNM will do shady things…will do everything in their power…will ask their friends at Edison Electric…create phony nonprofits…try to pay off people…to quash public power,” notes Mariel.  There’s even a corporate utility-written handbook for defeating public power efforts.  (There’s a response, too, from the American Public Power Association called Straight Answers to False Charges Against Public Power).

Already, PNM is already talking to mayoral candidates in Santa Fe in preparation for the political battle.  It is, Mariel says, “Part of the David and Goliath fight.”

New Energy Economy and its partners in Santa Fe are going to spend 2014 “doing our due diligence.”  Their research will focus on the lessons learned from the city’s recent purchase of the water utility, as well as best practices from leading utilities like Austin, TX.

Ultimately, they intend to push their city council and county commissioners to vote on the issue of a public electric utility in 2014.

This is the 14th edition of Local Energy Rules, an ILSR podcast with Senior Researcher John Farrell that shares powerful stories of successful local renewable energy and exposes the policy and practical barriers to its expansion. Other than his immediate family, the audience is primarily researchers, grassroots organizers, and grasstops policy wonks who want vivid examples of how local renewable energy can power local economies.

Sign up for new podcast notifications and weekly email updates from the energy program!

Photo credit: gholmes
Thanks to ILSR intern Jake Rounds for his audio editing of this podcast.
Show comments