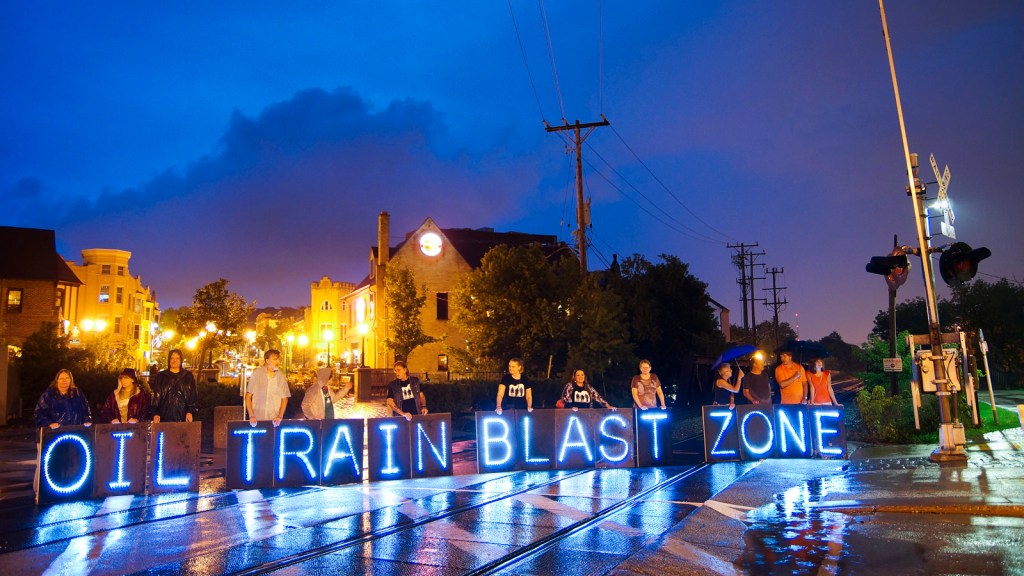 In September 2014, five climate activists with Rising Tide Seattle managed to halt the passage of a crude oil train at the BNSF Delta rail yard in Everett, Wash. After eight hours blocking the tracks, the five were arrested and charged with criminal trespass and blocking a train. Today, they go on trial.

In court, the activists — known as the Delta 5 — will argue their act of civil disobedience was necessary. A spokesperson for Rising Tide said the activists “will be the first ever to argue that their actions were justified because of the threat of climate change, using the ‘necessity defense’. The outcome of [the] trial could set national precedent for climate related civil disobedience and is being carefully watched.” The defendants will call on a rail safety expert and a climate scientist to argue that their actions were justified.

The train the Delta 5 stopped was carrying crude oil from the Bakken Formation in Montana and North Dakota. Bakken shale oil is particularly explosive, and was responsible for the 2013 conflagration that killed 47 people after a train derailed in Quebec.

The Pacific Northwest is rapidly becoming a hub for trains moving crude oil from the Bakken shale. Regulators in Washington state are currently considering six new oil-by-rail facilities. According to a report commissioned by the Sightline Institute, “Northwest oil train terminals could … lead to more oil drilling in the Bakken formation, as much as 114,000 barrels per day beyond what would be produced without the terminals. The resulting greenhouse gas pollution from this extra production could be as much as 30 million tons per year of carbon dioxide—the equivalent of doubling the number of cars on the road in Oregon and Washington.”

It was this fear that motivated the Delta 5.

“There came a point where I could no longer sit back and wait for the politicians to act,” said Delta 5 member Patrick Mazza. “I had to put my body on the line to demand not talk, but action on a massive scale to rapidly replace fossil fuels.”