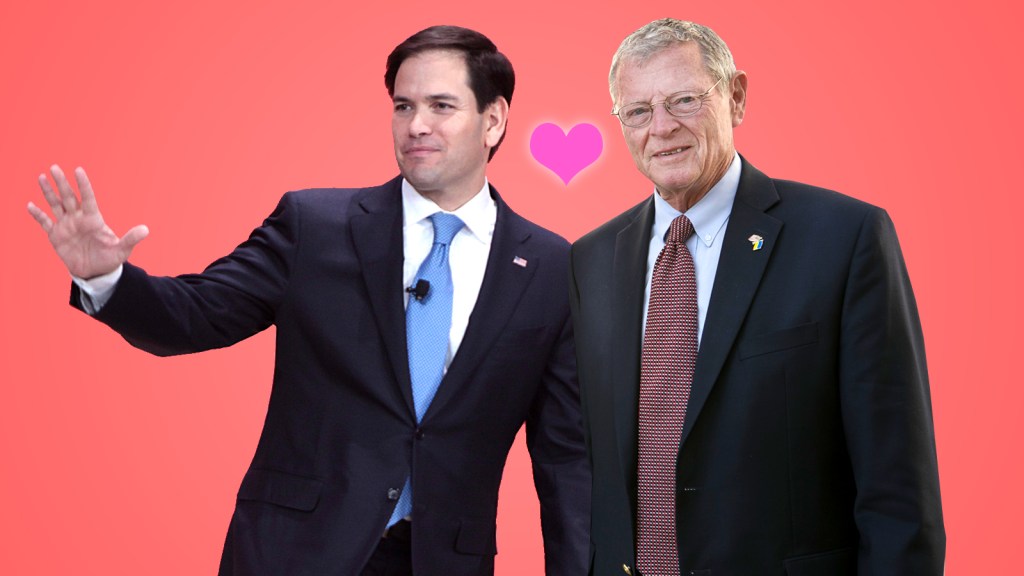 If any straggling climate hawks weren’t sure what to think about Marco Rubio, this news might help them make up their minds: The presidential candidate just picked up the endorsement of Sen. Jim Inhofe (R-Okla.).

Inhofe, the climate ostrich who inexplicably chairs the Senate Environment Committee, is best known for calling climate change the “greatest hoax ever perpetrated on the American people” and for trying to prove his point by throwing a snowball on the Senate floor. Last month, he back-patted a gaggle of climate deniers for “doing the Lord’s work.”

Though most of his endorsement focused on foreign policy, his support for Rubio should come as no surprise. As Rebecca Leber wrote for the New Republic in October, with Scott Walker out of the race, Rubio is the most dangerous candidate on climate remaining in the GOP field:

The candidate who should cause environmentalists to shudder the most is a less-obvious choice: Senator Marco Rubio. Rubio argues—as seriously as he possibly can—that there is nothing in the world that could convince him it’s wise for America to reduce its reliance on fossil fuels. We’re “not going to destroy our economy the way our left-wing government now wants to do,” he said in [September’s] GOP debate. “Every proposal they put forward are going to be proposals that will make it harder to do business in America, that will make it harder to create jobs in America.”

There’s a chance that, to many, Rubio seems moderate when compared to Ted Cruz and the orange thing with the hair. But this is where endorsements can be helpful shortcuts. If Coca-Cola funds and endorses research that downplays the link between soda and obesity, you know how to feel about the resulting studies. And now that Inhofe’s made his endorsement, climate hawks probably have all the information they need about Rubio.

I’m reminded of that Demetri Martin bit about bumper stickers: “It’s like a little sign that says, ‘Hey, let’s never hang out.’”