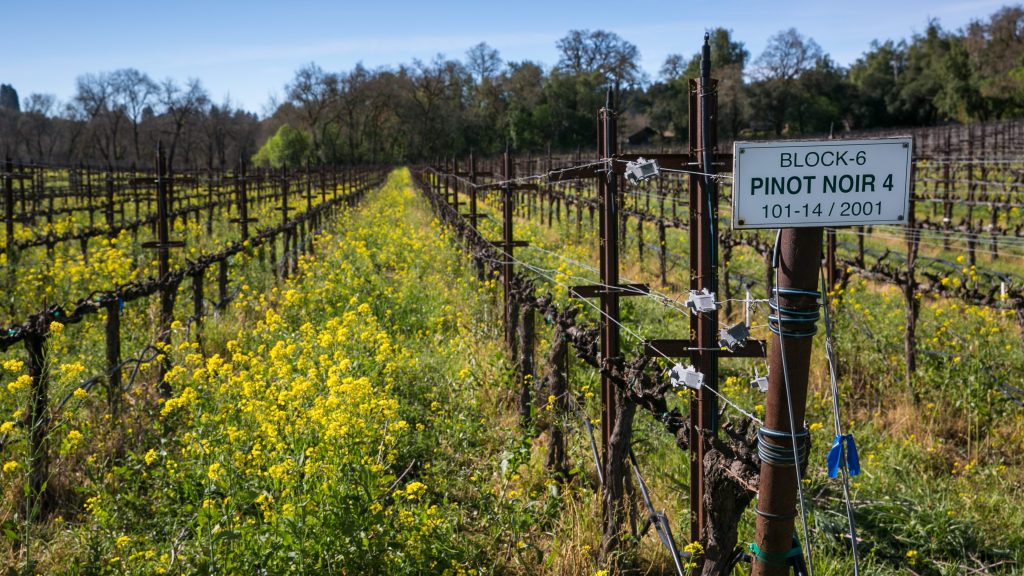 A recently pruned pinot noir vineyard is lined with a cover crop of mustard near Healdsburg, California. George Rose / Getty Images
COP on the farm

KATOWICE, POLAND — Hans Herren began his farm as a hobby almost 20 years ago. He’s been planting grapes and growing apple orchards on an 11-acre plot of land near Napa Valley in California. Thus far, the venture has been a success, but he knows he needs to make some adjustments soon.

“This year, I lost a lot of apples — the ones that were not inside the tree, covered by leaves so they were in the shade, were burned by the sun,” Herren said. He’s likely going to have to install a screen over his entire orchard to prevent fruit loss.

Today, the average temperature in California is rising, and the nights don’t get as cool as they used to. The warmer nights make for lower-quality grapes, Herren explained, as they’re not given a chance to store nutrients. “I’ve seen the change, even in the 15 years I’ve had those trees,” he said.

While Herren’s farm sits roughly a mile out of the path of the state’s recent wildfires, he’s worried that the burned banks of the valley will lead to landslides, since the trees are no longer there to store water. In other words: climate change has come for farmers, in California and beyond.

Yet while agriculture is suffering the impacts of a warming world, it is also a part of the problem. As the guardians of one of the planet’s largest carbon sinks – soils – farmers have contributed around 10 to 12 percent of the manmade carbon dioxide in the atmosphere. With a view to short-term gains, many farmers have made a habit of ripping organic matter out of the soil and leaving fields bare, to prepare their fields for growing crops. This has led to a plethora of issues, including soil erosion and water runoff – and it means that, where soil could be sequestering carbon into the earth, it is instead releasing it into the atmosphere.

“The plough is the worst invention of humankind,” Herren told Grist in Poland, where he was also attending the COP24 climate talks. “You go down the valley, and half the land is open. Ploughed, ready to go, spread with herbicides. It’s bare ground. You can almost see the CO2 evaporating.”

Herren has dedicated his life to making agriculture more sustainable. He made his name in the 1980s by releasing almost 2,000 Paraguayan wasps per second across areas of Africa, where the invasive mealybug was attacking the cassava, a native plant that provided nutrition to almost 200 million people across the continent. The female wasps lay their eggs in the mealybug; when they hatch, they eat the bug from the inside out. It was a natural solution to a problem that others previously had tackled with harmful and expensive pesticides.

Now, as one of several farmers from around the world to attend this year’s COP24, he’s working on a new problem: persuading his peers to play their part in saving the world. Doing so will mean a shift to unconventional techniques, such as forgoing the plough and planting cover crops, like clover or vetch, which allow dead plants and animal matter to build up in the soil.

Farmers, however, are a naturally conservative bunch: Many are scared of adopting new techniques, losing subsidies, or the banks coming for their land. Furthermore, they can be suspicious of abstract information passed down from governments and researchers.

If farmers are going to change, then fellow farmers will have to lead the way, said Andre Leu, a researcher and farmer from Australia who also attended the climate talks. “The issue of soil carbon, soil organic matter, has not been in what they were taught,” he told Grist. “To add something that didn’t exist before becomes a major paradigm shift, and with some farmers that’s difficult – they don’t want to even think about it.”

Leu explained that most American farmers are scraping by, up to their necks in debt thanks to the machinery and chemicals they thought they needed to ply their trade. Further, science has promised this sector a lot and hasn’t delivered, he said, so farmers have become naturally distrustful of following a new trend.

The only way to break through this trust barrier is to provide real-world evidence that these techniques are out there, and that they work, Leu said. So he’s keen to share his own experience, farmer-to-farmer.

After leaving school at 17, he became interested in sustainable farming and bought a plot of land. Over the subsequent decades, he has converted 150 acres in the northeastern Australian state of Queensland to a mixture of tropical fruit orchard, high-quality rainforest, and land for cattle grazing. Because all of that is done through sustainable methods, his property has now become a carbon sink.

His fellow farmers, he said, are starting to listen to his story – partly because they can see the impacts that climate change is having on their own land. “They are in crisis,” he declared. And it appears to be opening their minds.

Leu has also found a new audience among policymakers. Nine years ago, at COP15 in Copenhagen, he recalls being the “lone voice” on the potential of agriculture to combat climate change. Now, it is becoming a major part of the talks, with two major initiatives launched in the past three years.

In addition to signing the landmark Paris Agreement in 2015, a collection of countries also joined a French initiative called “4 per 1000.” The aim is to increase soil carbon stocks by 0.4 percent per year – a growth rate that would “halt the increase in the CO2 concentration in the atmosphere related to human activities” each year. (It’s worth noting that some scientists have criticized the initiative as unrealistic.)

Last year, in a decision known as the Koronivia Joint Work on Agriculture, farming was formally acknowledged as a key part of the U.N. climate process for the first time. Through this, all nations agreed to assess methods to improve adaptation and increase soil carbon around the world. They also pledged to report back on their findings at the 2020 climate talks.

For Herren, whose farm is already a carbon sink, this progress is still too slow. “It’s good that they’re doing it,” he said. “But why does it take so long?”

Farmers need to act immediately, he pointed out, if the world hopes to stay below 1.5 degrees Celsius (2.7 degrees Fahrenheit) of average global temperature rise — the threshold where some of the worst effects of climate change start to present themselves.