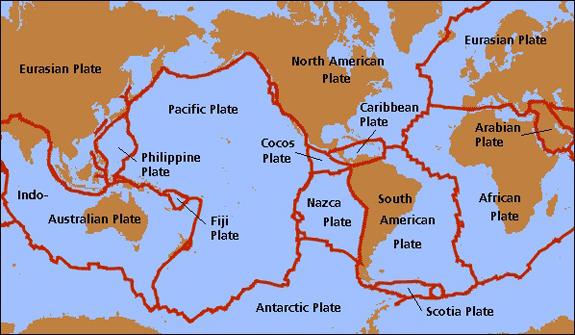 Picture a scientist. Good. Now make that scientist a geologist who studies tectonic plate movement. Are you picturing a total badass? Well, you should be, because from 20th century Arctic expeditions to modern-day explosives, badassery abounds in the study of plate tectonics.

Let’s start with Alfred Wegener, the German scientist who first proposed the concept of continental drift way back at the start of the 20th century. Yesterday, the New York Times published this beautiful cartoon about Wegener’s work:

To recap: Wegener flew around in hot air balloons to study the atmosphere, hunted seals, fended off polar bears, traveled around on dogsleds, rigged up scientific equipment to box kites, and — perhaps most impressively — endured wicked backlash from the scientific community for what was then a radical new concept. (Lest you forget, this all happened in the early 1900s, which makes these expeditions about a thousand times more impressive.)

Okay. I promised you explosives.

While continental drift is now common knowledge, scientists still don’t entirely understand how the continents move, which is why some of them recently decided to detonate a bunch of dynamite 50 meters below the ocean floor off the coast of New Zealand.

No, this was not the move of a bunch of mad scientists, but an attempt to create some harmless seismic waves. Seismic waves like those generated by earthquakes have long been a useful tool for geologists to explore the earth’s underbelly because they pass through (or bounce off of) different surfaces differently. By measuring how these waves travel, scientists can effectively see the different layers of whatever the waves are moving through.

The problem is, seismic waves from earthquakes are too big to get a very precise picture. Seismic waves generated with carefully placed explosives, on the other hand, provide a much more fine-grained view of whatever they’re traveling through.

And so, equipped with plenty of dynamite and hundreds of seismometers, this international crew of researchers continued the tradition of badassery in their field and blew up the ocean (they didn’t really, but it sounds cool when I say it like that). More importantly, the team came away with some valuable new information about how the plate under New Zealand moves around. Turns out, there’s a thin, lubricating layer of rock between the plate and the mantle that allows for some slippage. Scientists have suspected layers like this to exist under other plates, so this is further evidence that this may be a common feature of tectonic plates around the world.

Our big takeaway? Scientists should probably use dynamite more often.