Winter has descended on Antarctica. Even as cold and darkness blankets the bottom of the world, the region’s most watched ice shelf is is continuing its epic breakdown.

A crack started spreading across the Larsen C ice shelf in 2010, reaching 100 miles in length in February. Researchers with Project MIDAS, a British group monitoring the ice shelf, have spotted the first major change to the rift since then. A roughly six-mile crack branching off the main chasm recently formed, further altering the already unstable ice shelf. 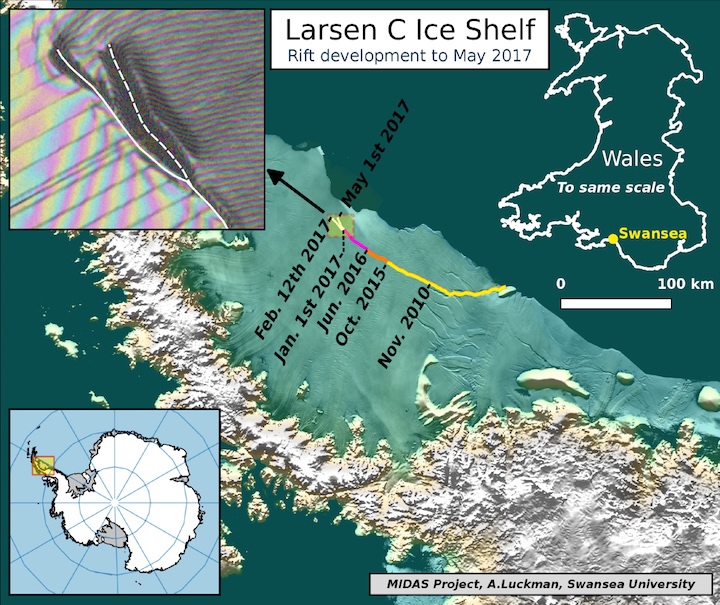 The Larsen C ice crack has a new branch, which formed at the end of April. Project MIDAS

The crack is expected to eventually cleave off 10 percent of Larsen C’s ice, an area roughly the size of Delaware. That loss will alter ice shelf dynamics and could speed the demise of the rest of the ice shelf, similar to what happened to neighboring Larsen A and Larsen B.

The Larsen ice shelf complex is located on the Antarctic Peninsula, a roughly 800-mile stretch of land sticking out in the Southern Ocean like a tentacle. Temperatures there rose 5 degrees F in the latter half of the 20th century before cooling a bit since then, due largely to the ozone hole recovery.

The warmer air and water in the region is largely responsible for the astonishing changes to the region’s ice. Larsen A crumbled into oblivion in 1995 and Larsen B followed suit in 2002.

Scientists don’t have a timetable for when the huge piece of Larsen C could break off, but the branch represents another sign of growing instability. The new breach formed sometime in the past six days, showing how fast changes can occur even in the cold season.

The main crack, which is already 1,500 feet wide, is also spreading up to three feet per day, even as its length remains stable.

Other ice shelves that ring Antarctica are also becoming less stable, due largely to warmer air and water driven by carbon pollution. Ice shelves hold back the unimaginably huge cache of ice covering Antarctica. Losing them will speed the flow of that ice into the ocean and with it, crank up the rate of sea-level rise.

Scientists have warned that melt in West Antarctica may be unstoppable. Losing all the land ice in that region would push sea levels up to 13 feet higher, a change that would take centuries to unfold.

Other new research points to widespread surface melt at multiple locations around Antarctica. That includes a raging seasonal 400-foot wide waterfall and nearly 700 drainage systems undercutting ice, both developments that have shocked scientists.

The Larsen C crack is only a symptom of a larger problem. Taken together, recent findings show troubling changes are happening almost everywhere across Antarctica’s massive icy expanse.

Veggies grown with toilet water could be headed to your table