Hundreds of people gravitated to San Francisco Wednesday to ask the EPA not to repeal the Obama-era Clean Power Plan.

There were representatives from environmental groups, as well as doctors, politicians, kids, retirees, a mom bouncing a wailing baby, and — what else? — someone dressed in a polar bear suit. All directed their appeals to representatives from the EPA, who listened silently and jotted notes as the speakers made their cases.

It was one stop in a series of hearings that the EPA has scheduled around the country to take public comment. And while everyone in San Francisco seemed to be there to speak in support of the landmark climate policy, that wasn’t the case for the hearing earlier in the month in the coal town of Gillette, Wyoming.

The Clean Power Plan nudges states to restrict greenhouse gas emissions and other harmful pollution. EPA Administrator Scott Pruitt has shown every indication he plans to kill the plan, but he can’t just order it to the electric chair — there’s a formal process he has to follow first, including these public hearings.

Officially, the EPA’s position is that, “The Clean Power Plan would … have had serious economic impacts on our country while doing little to help the environment.” But an EPA study released last October, under Pruitt’s leadership, suggested that repealing the plan would cause between 1,900 and 4,500 deaths by 2030. 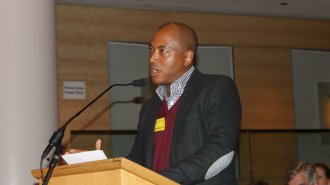 The first speaker on Wednesday was a city councilor from Berkeley, Ben Bartlett. “By moving to repeal the Clean Power Plan, Mr. Pruitt is turning a blind eye to the health of families, our children, and seniors, particularly those in low-income communities of color,” Bartlett said. He concluded his remarks by expressing his hope that the EPA would take the overwhelming number of comments like his to heart and give up on the attempt to roll back the standards.

That seems like a long shot. Indeed, the entire hearing felt a bit like a forced performance on both sides. After all, environmental groups have already submitted their comments to the EPA and it seems unlikely that the administration will learn something new and revelatory from these public comments. Early in Wednesday’s hearing, a geologist stood at the microphone to explain — with perfect clarity — the science of climate change. If only that’s all it took to change minds. 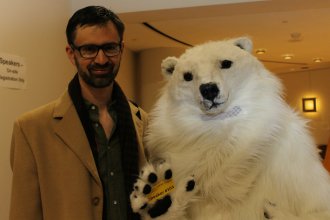 Nathanael with a polar bear slated to speak at an EPA hearing on the Clean Power Plan. Nathanael Johnson

When I asked Bartlett the same question, he had a more stirring answer. “The universe rewards effort,” he told me. “If you put energy out, it comes back. How many times did the Republicans try to repeal Obamacare? Right? You create energy, you hone messaging, you gather support, and, bit by bit, you acquire heft.”

The comment period ends on April 26. The EPA is required to collect and consider comments before initiating the process to rescind or rewrite the plan.