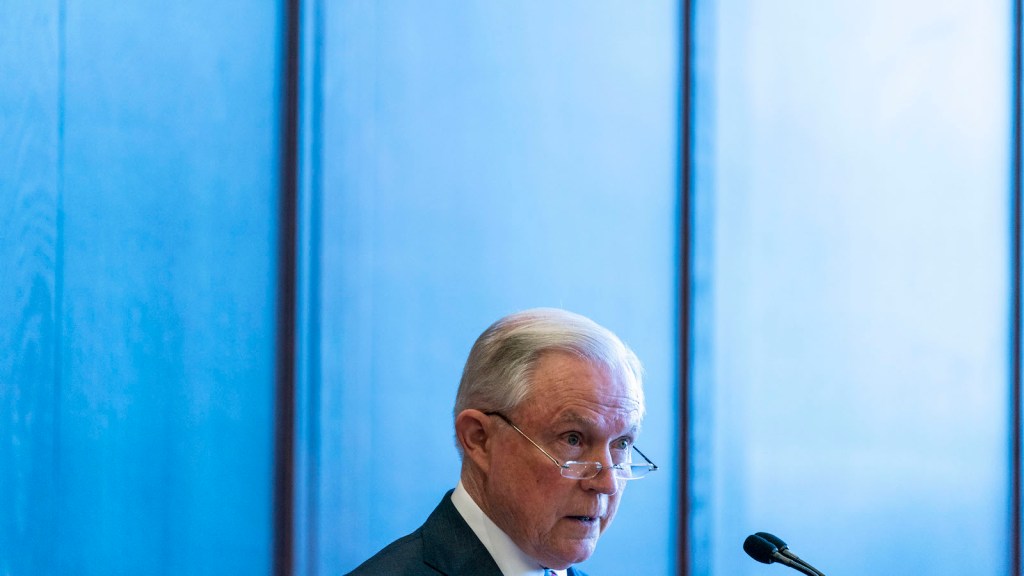 When a coal executive and two lawyers stood trial in Alabama last month for bribery and related crimes, it was clear from the start that things might get uncomfortable for Jeff Sessions. The attorney general’s name, after all, appeared on a list of possible witnesses.

Though he was never called to the stand, detailed references to Sessions and key members of his staff thread their way through the record of the four-week trial, which concluded on July 20 when David Roberson, vice president of Drummond Coal, and Joel Gilbert, a partner in the Birmingham-based law firm Balch & Bingham, were found guilty of paying off an Alabama lawmaker to oppose a federal environmental cleanup effort that could have cost Drummond millions. (The judge dismissed the charges against a second Balch lawyer, Steve McKinney.)

Sessions has long had close ties to Balch and Drummond — the companies respectively ranked as his second- and third-biggest contributors during his Senate career, collectively donating nearly a quarter of a million dollars to his campaigns. And as Mother Jones and the Project on Government Oversight have previously reported, then-Senator Sessions directly intervened with the Environmental Protection Agency to block the cleanup at the center of the federal bribery case.

Upon becoming attorney general, Sessions had a glaring conflict of interest in a criminal prosecution that he was technically overseeing as the nation’s top law enforcement official. Yet despite questions from Senator Patrick Leahy, D-Vermont,  and others, he repeatedly refused to say whether he had recused himself from the matter. His silence seems even more questionable given evidence introduced as part of the case.

Billing statements, meeting minutes, and other records briefly made public during the trial — and quickly placed under seal by the judge presiding over the case, but not before Alabama columnist Kyle Whitmire saved copies — reveal that Sessions and his Senate staff coordinated more closely with the defendants than previously known. The documents indicate extensive contact on the EPA action between Sessions’ office and Roberson, Gilbert, and McKinney, including at least 13 phone calls and two in-person meetings in Washington, D.C. And they show that Drummond’s attorneys at Balch & Bingham coached Sessions’ staff on how to attack the EPA’s position and that Sessions’ staff reported back to the lawyers about their interactions with the agency.

The backdrop for the bribery case is North Birmingham’s 35th Avenue neighborhood — an impoverished, largely black enclave sandwiched between the city’s airport and various industrial sites, including a Drummond plant. For years, residents have reported unusually high levels of cancer and respiratory illness, and they have complained about the dark soot that coats their homes. In 2013, the EPA found such high levels of toxins in the area that it designated a 400-acre section of the neighborhood a Superfund site; federal health authorities warned parents not to allow their children to play outside in their own yards. The EPA determined that Drummond was one of the companies potentially responsible for the pollution, and thus possibly on the hook for some of the cleanup costs.

When, in 2014, EPA officials tried to elevate the neighborhood to the National Priorities List — a select group of highly polluted sites picked for accelerated and more extensive cleanups — they hit a brick wall of resistance from Alabama’s mostly Republican political establishment. But to the surprise of EPA officials, a local Democratic state lawmaker, Oliver Robinson, also joined the opposition, sending a February 2015 letter to Alabama environmental authorities decrying the EPA effort.

It would later turn out that this letter was ghostwritten by Balch & Bingham’s Joel Gilbert, who, on behalf of Drummond, was funneling money to Robinson’s personal foundation in order to secure the lawmaker’s cooperation in blocking the EPA cleanup. Last summer, Robinson pleaded guilty to accepting $360,000 in bribes. He then began cooperating with prosecutors as they built their case against the Drummond and Balch officials he said were at the heart of it: Roberson, Gilbert, and McKinney (lawyers for all three men declined to comment for this article.)

Like Robinson, Sessions also sent a letter ghostwritten by Balch lawyers, this one to the EPA. Records released during the trial shed light on how this letter, sent a year after Robinson’s, came to be, as well as the extensive actions Sessions took on behalf of his top political donors to thwart EPA action in North Birmingham. Sessions’ office did not respond to requests for comment on this story.

On Feb. 4, 2015, Balch lawyers convened to discuss their plan to derail the 35th Avenue site’s inclusion on the National Priorities List. According to notes of that meeting released at trial, Balch had prepared a draft “letter but no signatures” for Alabama’s congressional delegation that disputed the methods the EPA had used to determine responsibility for the pollution (and thus potential liability for the cleanup). The Balch meeting notes list a Sessions staffer named Brandon Middleton as the only lobbying contact for Alabama’s congressional delegation on the matter. The day after the meeting, internal Balch records show that Gilbert reached out to Sessions’ office. And they note that on Feb. 18, McKinney spoke with Middleton “regarding North Birmingham.”

During the rest of 2015 and into early 2016, Sessions staffers communicated extensively with representatives of Balch and Drummond over the letter, sending drafts back and forth. On September 15, 2015, Drummond’s Roberson and Balch’s Gilbert flew from Birmingham to Washington, D.C., for meetings with staffers for Sessions, Sen. Richard Shelby (R-Alabama), and Rep. Gary Palmer (R-Alabama). In an “Environmental Update” subsequently posted on Balch & Bingham’s website (and since removed), the firm said its attorneys “met with Senator Jeff Sessions” and predicted that a letter issued “shortly” from “key members of the Alabama congressional delegation” would make the case for opposing the effort to make Drummond and other companies pay for cleaning up the polluted site in Birmingham. Two months later, on Feb. 26, 2016, Middleton delivered a letter signed by Sessions, Shelby, and Palmer to the EPA. The letter also summoned top EPA officials to a meeting “to discuss the concerns.”

“Any information given to Senator Shelby’s office would have been one of many tools used to help inform the senator,” said a spokesperson. Palmer’s office did not respond to questions.

After the letter was delivered, Sessions’ office continued to work in close coordination with the Balch attorneys at the center of the bribery case to aggressively undermine the possibility of a cleanup. In March 2016, the EPA responded to Sessions’ letter, expressing disagreement but offering to meet. According to an email obtained through the Freedom of Information Act, Middleton told an EPA official that he was “waiting to hear back from our folks and boss on how they’d like to approach meeting.” But Sessions’ staffers weren’t just looking for feedback from Sessions. Balch records show that over the course of several months, Balch attorneys and Middleton exchanged emails and spoke over the phone about how to deal with the EPA’s response and prepare for the meeting with EPA officials.

The day before the meeting, McKinney met Sessions staffers to prep them, according to the firm’s billing records.

On July 7, two high-level EPA officials met with members of Sessions’ staff, who grilled them on the Birmingham cleanup and attacked the methods the agency had used to measure toxins in the neighborhood. Sessions himself was scheduled to attend, but at the last minute he backed out to spend the day with then-candidate Donald Trump, who had decided to make a round of visits to Republican senators on Capitol Hill.

One of the EPA officials who attended the meeting told Mother Jones that he was surprised by the stridency with which Sessions staffers opposed the EPA’s actions in North Birmingham, especially considering the situation on the ground. “For residents, there was an immediate threat,”said Mathy Stanislaus, who was then an assistant EPA administrator, but “the public health risk didn’t seem to be a prominent concern from those who opposed it.”

During his confirmation process to become attorney general, Sessions was asked how he would handle an investigation involving campaign donors. Sessions said he would consult with Justice Department ethics officials on any investigation where a possible conflict might exist, but his office has repeatedly refused to discuss whether he insulated himself from the Drummond bribery case.

And he isn’t the only Justice Department official linked to matters involving the 35th Avenue Superfund site. When Sessions became attorney general, he installed in key positions at least two people involved in the conversations his office had on the subject. Among them was Brandon Middleton, who served as the liaison between Sessions’ office and the Balch lawyers working to undermine the 35th Avenue cleanup. Sessions appointed Middleton as a top deputy in the Justice Department’s environmental and natural resources division — the office responsible for bringing cases against corporate polluters, such as Drummond, to force them to fund environmental remediation. (Middleton has since moved on to a position at the Interior Department.) And Sessions named Jeff Wood, a Balch & Bingham partner who was part of the firm’s 35th Avenue lobbying effort, to the top job in that division. (Wood recused himself from the matter.) Middleton and a spokesman for Wood did not respond to questions.

With the convictions of Gilbert and Roberson, the lead prosecutor in the case claimed victory for the people of North Birmingham. “We’re happy for the citizens of Birmingham that someone is finally speaking on their behalf,” prosecutor George Martin told reporters after the trial ended. “This is a righteous verdict.”

Balch’s managing partner Stan Blanton said in statement, “Although our firm was not a party to the case, I and the rest of our partners, associates and staff are deeply disappointed in any conduct that does not adhere to our commitment to the rule of law and to the communities in which we are fortunate to live and work.” Yet Drummond blamed Balch for Roberson’s legal troubles. “We consider David to be a man of integrity who would not knowingly engage in wrongdoing,” according to a company statement, “When an environmentalist group raised allegations regarding our operations in the Birmingham area, Drummond responded by hiring one of Alabama’s most well-respected environmental law firms … We were assured the firm’s community outreach efforts on our behalf were legal and proper.”

If anything, what the trial exposed was just how intricate the ties were between powerful corporate interests such as Drummond and Balch and members of the Alabama political establishment, notably Sessions.

If justice was delivered for North Birmingham, it still may not feel that way to the people who continue to live there. Roberson and Gilbert may have been convicted on bribery charges, but the plan they carried out has worked so far. With the help of Sessions and other Alabama lawmakers, they blocked the EPA from mounting a large-scale cleanup — and Drummond has yet to pay a dime for any role it might have played in turning an impoverished neighborhood into a Superfund site.