California’s fire tornado is what climate change looks like 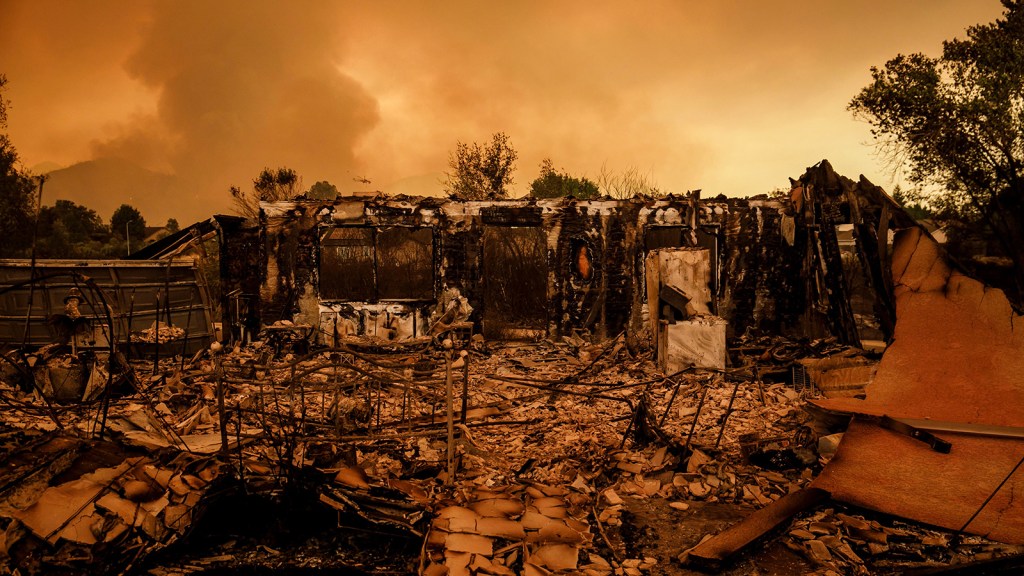 California’s fire tornado is what climate change looks like

For weeks now, the world has been in the grips of a global heat wave — one of the most destructive and unusually hot summers in human history. And we know that a summer like this couldn’t have happened without climate change.

In California and in wildfire zones around the world, survivors are sharing the images and videos they captured while fleeing some of the most destructive fires in history.

From an on-the-ground, human perspective, July looked and felt like hell.

This dad and his family barely escaped a terrifying "fire tornado" in Northern California https://t.co/2YcsoPwDCZ pic.twitter.com/8WugufftqD

If it looks to you like a giant fire tornado, you’d be right. And living through it was just as terrifying as you’d expect.

Speaking with reporters on Wednesday, Governor Jerry Brown said simply, “We are in uncharted territories.”

Looking at the numbers, it’s easy to see why he’s right. July was the hottest month ever measured in Redding. Burnable vegetation in the area is at the 99th percentile. These are ideal conditions for a megafire. The Carr Fire alone is more than four times larger than the city of San Francisco; its smoke is setting records for the worst air quality in history as far away as 200 miles away in Reno, Nevada.

But perhaps the most unusual thing about the Carr Fire is the incredibly strong winds it created:

A house stripped of all roofing, down to the sheeting. Huge trees in the yard uprooted, along with parts of the brickwork. And none of it was burnt, only wind damage. Unbelievable….

This collapsed high voltage tower north of Keswick Dam, is an example of damage not directly caused by fire but by the superheated winds moving beneath a pyrocumulus cloud. Think giant blowtorch. Note the bare ground, there is no ash or evidence of fuel visible. #CarrFire pic.twitter.com/OJQzm9tvPw

A firefighter told me winds from the #CarrFire ripped trees out of the ground and threw them to the side. He wasn’t exaggerating. pic.twitter.com/FTyXzzcV7Q

The heat from the fire was so intense that it created a towering, rotating cloud six miles high — meteorologists call them pyrocumulus, but this one effectively was a giant tornado. The wind damage from the Carr Fire is consistent with speeds in excess of 143 mph.*

Winds this strong over such a widespread area are exceedingly rare in wildfires, though they have been documented before. Fires need oxygen to burn, and the Carr Fire created its own weather to ensure a constant oxygen supply — to devastating effect.

Another breathtaking example of a pyrocumulus cloud over the #CarrFire this week — generated when the fire is so hot the air explodes upward, creating a new local weather pattern that can bring strong winds, lightning, and… new fires.

The pyrocumulus cloud is to this generation what the mushroom cloud was to the Boomers. pic.twitter.com/7fBA0uhKOi

Big fires, like the Carr Fire, are getting more common as more people live closer to forests and temperatures rise. But it’s that latter factor that’s most important in making fire size skyrocket in recent years. The heat we’re experiencing right now is unlike any previous generation has ever experienced. And it’s not just happening in California.

In northern Finland, sunbathers lounged with reindeer near the Arctic Circle while a wildfire burned in the distance.

Heat wave in north Europe: this scene needs no comment – center of Rovaniemi in north Finland at 32 °C. July 20. It is still very hot there today (up to 32 °C in extreme north of Finland). Report: Pekka Niinivaara pic.twitter.com/u7h3yIwhlr

In Greece, there is terrifying footage of people escaping July’s horrific fires.

The video of people fleeing to the ocean during the Greek fires is an absolute nightmare. I can’t even begin to imagine pic.twitter.com/vcxr76Udcb

My thought exactly–this was genuinely the scariest natural disaster footage I think I have ever witnessed. Although some of the new footage of the Carr Fire vortex that's still trickling out of the disaster zone is close competition…

With more than a dozen large fires burning throughout California, this year’s fire season is already starting to outstrip the state’s resources. Thousands of firefighters have flown in from across the country to help fight the blazes, and wildfire season is just getting started. August is the peak month for wildfires across the western U.S. According to the latest fire outlook released on Wednesday, nearly the entire region will remain at above normal risk until at least October.

In Europe, ideal wildfire conditions are set to return this weekend, with temperatures in Spain and Portugal forecast to challenge all-time European records.

If there’s one thing we should take away from this nightmarish weather, it’s this: As bad as these fires are, climate change isn’t going to let up until we work together to address its root causes. Warming-fueled megafires isn’t a new normal, it’s a new exceptional; a new extraordinary.