The green beacon that is the state of California is making clean-energy strides, according to new stats out this week. It’s harnessing a record amount of solar power, building more turbines to capture wind power records, and closing in on the moment when the grid goes 100 percent carbon free.

Every month California’s electricity managers put out a report showing what that climate-conscious state is up to. And this one brings sunny signs of progress, unheralded achievements, and fun factoids. Earlier this month, for instance, California set a new record for solar power generated.

And on April 28, at precisely 1:25 p.m., renewables provided 72.7 percent of California’s electricity needs. That’s also a record, but not an aberration. It’s consistent with a longstanding trend as California’s policies connect more solar panels and wind turbines to the grid. As you can see in the next graph, California keeps hitting new records — usually around noon — when renewables provide the majority of the electricity for a few hours. 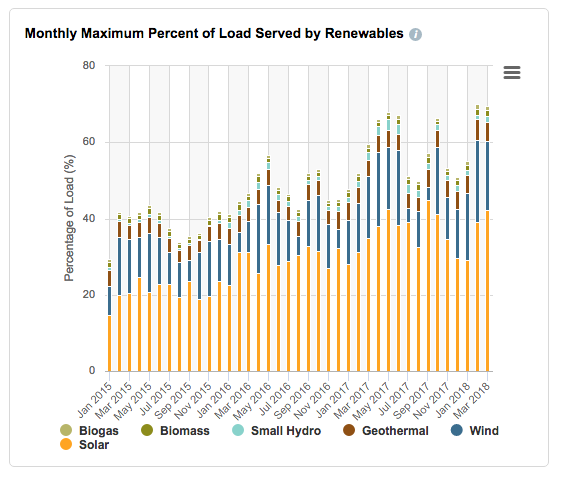 Since 2015, renewables have helped California decrease the amount of greenhouse gases its power plants released into the atmosphere. But this past February, the state’s electricity was more carbon intensive than it was in 2017, and in March it was even worse:

What’s that all about? There’s a hint in the report. California had to dump about 95,000 megawatt hours of renewable power in April, because all that power would otherwise have flooded onto the grid when people didn’t need it — blowing fuses, igniting fires, and melting every computer without a surge protector. That’s a lot of energy, enough to provide all of Madagascar’s electricity for the month.

Transporting electricity and storing it is expensive, so the people managing the electrical system ask power companies to stop putting power on the grid, to curtail their production. It’s called “curtailment” in electric-system jargon. As the number of solar panels feeding the grid increases, so do curtailments. 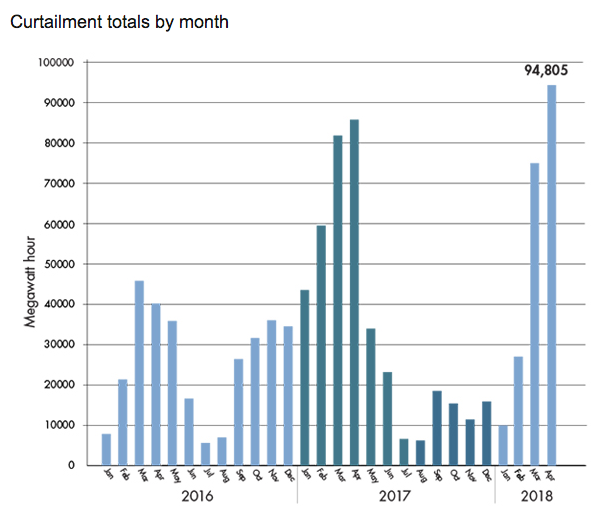 The thing is, every new panel sending electricity to the grid is still displacing fossil fuel electricity. So that can’t explain why California is burning more fossil fuels than in the last couple of years.

What’s the real problem, then? It’s almost certainly the lack of water. When wind and sun stop generating electrons, we’d like to have other low-carbon source of electricity that we could turn to — what some energy wonks call a “flexible base” of power generation.

California’s big source of reliable low-carbon electricity has been hydropower. But the state is bracing for a drought after a warm, dry winter. So California is hoarding water behind dams, rather than letting the water run through turbines to generate electricity. As a result, hydropower generation is down. And the state’s nuclear, geothermal and biomass plants are already running at capacity. As a result California is replacing the missing waterpower with fossil-fuel generation, namely natural gas.

All this serves as a good reminder that renewables can’t provide us with all of our electricity needs alone. We’ve also got to create bigger and better batteries, string up international transmission lines and build more low-carbon power plants that we can ramp up and down to complement those renewables. If California gets that done, its power grid will be cleaner and more energizing than a $5 shot of wheatgrass juice sold from a food truck by a man with a well-conditioned beard.

Correction: A previous version of this story incorrectly equated California’s curtailment to the monthly electricity consumption of Guatemala, which was off by a digit. It’s more like Benin or Madagascar.

We know what the Kochs want. What about major foundations?