This story was originally published by Water Deeply. For important news about water issues and the American West, you can sign up for the Water Deeply email list.

Evelyn Rios wept in 2014 when the well went dry at her home of 46 years — the home where she and husband Joe raised five children on farmworker wages. They cannot afford another well, so they do without. Her angst only grew as California’s five-year drought dragged on.

Finally, after one of the wettest winters on record, Governor Jerry Brown announced in April that the drought had ended. But situation remains grim, says Rios, 80, who lives in rural Madera County in California’s San Joaquin Valley. She thought she was being hooked up to the city of Madera’s water system. Now, the emergency money for such projects has dried up.

“So, the drought is over?” she asks. “What about us? What about the plans to hook up to Madera’s water? How long will we have to wait now? The drought might be over for you, but it isn’t over for me.”

Full reservoirs and swollen rivers don’t mean that much to people living in rural San Joaquin Valley, where about 1,000 people still have dry wells. Their water sits underground in the nation’s second-largest groundwater aquifer, which was mined and dramatically drawn down by farmers protecting the valley’s $40 billion-a-year agriculture industry.

Legislation passed in 2014 will help regulate groundwater pumping, but it will be at least two decades before the law is fully implemented, leaving communities vulnerable to further groundwater shortages and having to compete with big farms digging deeper wells. In addition, many of those people live in small, unincorporated communities, which often lack the resources to properly maintain community water systems. 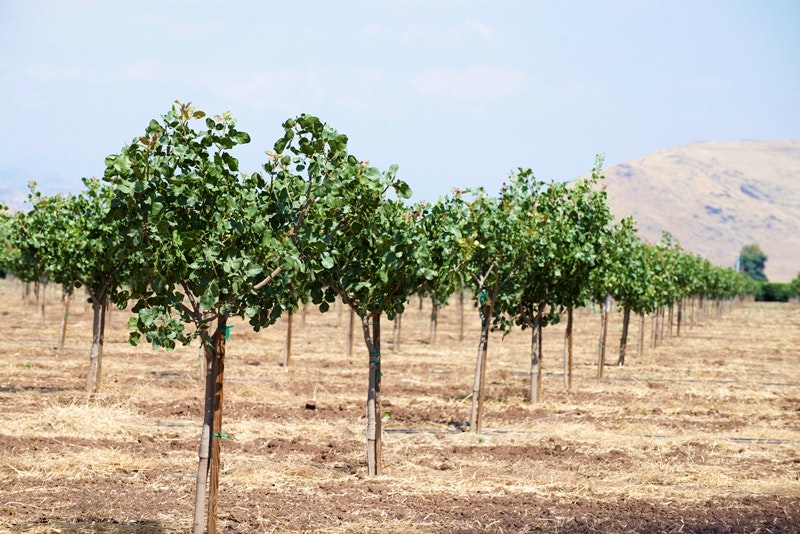 A pistachio orchard in Tulare County, California, was planted during California’s five-year drought. A record 904 water wells were drilled in the county during 2015, in part to help sustain agricultural operations. Tara Lohan

Waiting years for safe drinking water has now become a way of life in the valley. It’s one more stress for people who live in California’s most vulnerable social and environmental conditions. They face contaminated water, dirty air, lack of healthcare, and language barriers, according to a state environmental screening tool called CalEnivroScreen.

People of color in this farm country die up to 15 years sooner than people who live in more affluent areas of Fresno, according to the Central Valley Health Policy Institute at Fresno State.

Many of these rural residents will still be without reliable water this year while the rest of California debates landscape watering rules.

The state is trying not to abandon people with dry wells. Starting July 1, an additional year of free water will be delivered to massive tanks that were placed at many dwellings with dry wells, including the Rios’ home.

Which only raises more questions, say water advocates in Central California. One year won’t be enough time to fix all the problems out there. What will happen afterward? Will the state continue to buy water?

“And what will happen should any new homes run out of water during the next year?” asks Jenny Rempel, director of education and engagement for the nonprofit advocacy group Community Water Center. “There is not nearly enough funding for everyone with a dry well to get a grant or even loan assistance since the existing funding is massively oversubscribed.”

Emergency drought spending already amounts to $27 million in the Central Valley, paying for everything from a new well in East Porterville to food subsidies, says spokesman Kelly Huston of the state Office of Emergency Services. Other state agencies, such as the Department of Water Resources and the State Water Resources Control Board, will continue working to get water for residents, he says, whether there is a drought or not.

But things moved faster during the drought emergency. Advocates say the additional year of emergency water funding might elapse during the application process for state bond money, and projects might take another year to complete.

“You have to go through a longer process without the emergency,” says Maria Herrera of Visalia-based Self Help Enterprises, which has helped rural residents build and repair homes for decades. “That’s not a good solution if you’ve been waiting for years already.”

Herrera works with Tulare County residents, including those in Monson, where about 200 residents have never had access to a central water system — just private wells. Many are expected to be connected to a distribution system this year to get water from a new public well. But Monson has been waiting since 2008, when contamination was found in private wells.

“The new well is right across the street from my house,” says resident Lazara Luengas. “We might have water by the end of August. Maybe I’ll start my yard up again. It’s so hard to live without water in your home. I don’t have the words to say how grateful we are to Self Help.” 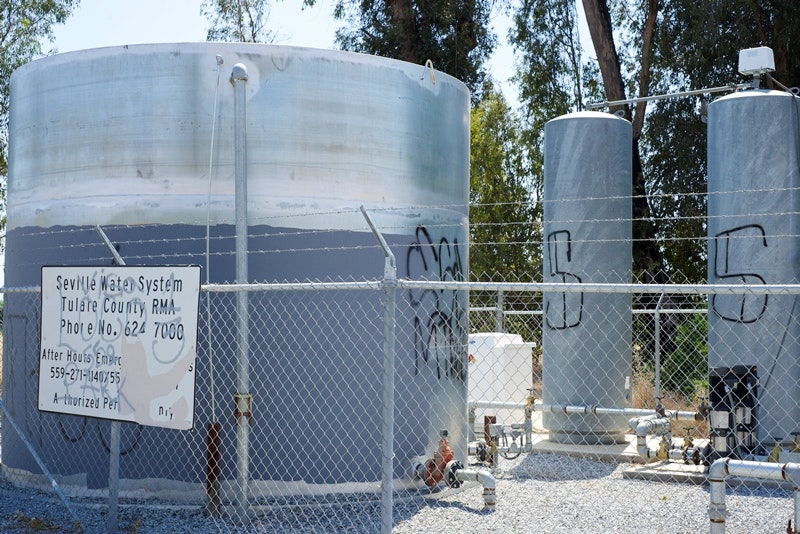 In the small, unincorporated community of Seville in the San Joaquin Valley, a new well was installed during the drought, but old infrastructure still hampers the distribution of clean water. Tara Lohan

Tulare County has been at the epicenter of private dry wells, and the number of failing wells is beginning to diminish. Still, there are hundreds of problems left to resolve.

About 800 homes will be hooked up to water soon in East Porterville, where more than 7,000 people went dry a few years ago, Coyne says. About $40 million from state and federal sources will be spent in the process.

“I’ve never seen a project of this scale put together in the time frame that we have,” he says. “It was engineered in less than six months.”

Fixes come in all sizes and shapes. In Seville, north of Visalia, residents got a replacement for the failing and contaminated town well. But the new well delivers much higher water pressure, stressing ancient pipes — some are older than the Titanic, Coyne says. The distribution system needs to be rebuilt.

Even as millions of dollars are invested and the water comes back to many homes, residents know wells could go dry again if groundwater pumping ramps up. A Sacramento Bee investigation found a record 2,500 wells were drilled in San Joaquin Valley in 2015 during the height of the drought. The state passed the Sustainable Groundwater Management Act in 2014, but it won’t fully kick in until 2040.

During the drought, trillions of gallons of water were pumped without being replaced in the Central Valley, one recent study in Geophysical Research Letters shows. And farmers continue to invest in almond orchards, which cannot be fallowed during dry periods.

Vickie Ortiz, whose well is dry in Fairmead, south of Chowchilla in Madera County, says she respects her farm neighbor. But if her neighbor drills down 1,000 feet for water, it probably will eventually dry up any new, shallower well that she might get.

“We’re finding new almond plantings all around here now,” she says. “To the right of my five-acre parcel, there are 30 acres of almonds. Behind me, there’s another 20 acres. When his well goes dry, he’s going to dig deeper. Then I’ll have to dig deeper. And I’ll still have a loan on the well I’ve got. No, this is not going to end until somebody is monitoring it.”

Climate change is wreaking havoc on our water