There’s been an awful lot of talk about cow farts and the Green New Deal, despite the fact that the resolution for a Green New Deal never mentions the word cow, nor fart (more’s the pity). It was President Donald Trump who made that connection.

The resolution’s co-sponsor, Representative Alexandria Ocasio-Cortez of New York, recently clarified the point on Showtime’s Desus & Mero show: “It’s not to say you get rid of agriculture. It’s not to say we’re gonna force everybody to go vegan or anything crazy like that,” she said. “But it’s to say, ‘Listen, we gotta address factory farming. Maybe we shouldn’t be eating a hamburger for breakfast, lunch, and dinner.”

Politically, it makes sense to tell people that they can keep something popular, like eating (just a little less) beef, while promising to crack down on something unpopular like factory farms. But if you want to reduce greenhouse gas emissions, it’s a bit backwards. Get rid of factory farms, and we’d have to cut way, way back on the hamburgers.

As you can see in the graph below, the biggest climate problem with beef isn’t farting cows, it’s the space that grass-fed beef takes up. 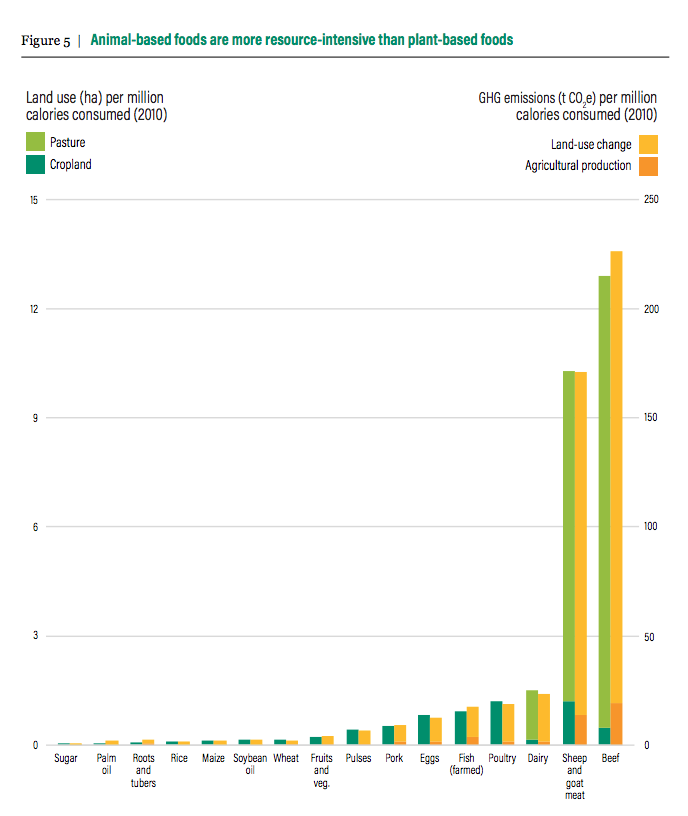 Because feedlots, or “factory farming,” minimizes land use and shortens the time cattle need to grow to full size, feedlot beef often has a lower greenhouse gas footprint than pasture-raised variety. There are exceptions: A few studies have shown that, with the right management and conditions, pastures can suck up more carbon than the cattle belch out (yes, it’s mostly belching, not farting).

To be sure, there are other thorny issues surrounding cattle on feedlots, but none of them are clear cut. Whether you are talking about the environment, health, or animal welfare, it’s all complicated. One way or another, those champion carnivores known as Americans are going to have to eat a lot less beef if we want to reverse climate change.

It’s no surprise that Trump tweeted that the Green New Deal would “permanently eliminate” cows, and no surprise that Ocasio-Cortez attempted to deflect the criticism to factory farms. It’s the perfect provocation. Food isn’t just fuel, it’s the stuff of sensory memories, families gathering around the table. It’s a tool by which culture is transmitted through generations. Mess with someone’s food traditions and you are messing with their identity.

As the Chinese writer Lin Yutang asked: “What is patriotism but the love of food one ate as a child?”