Ahh, carbon prices. Those pesky, politically fraught penalties governments slap on pollution and the polluters who emit it. Carbon taxes and pricing schemes could be our golden ticket out of climate change, but a new report shows just how far we have to go to put an effective price on carbon.

Welcome to the carbon price gap, the distance between a country’s current CO2 price and the low-end benchmark of an effective carbon tax (around $35). Earth is on track to warm more than 2 degrees C, a threshold at which ice sheets collapse at breakneck speeds, small island nations drown, and natural disasters pummel coastal regions.

At their current rate, carbon prices won’t overlap with the actual cost of carbon pollution until 2095. We simply don’t have that kind of time. The report, titled Effective Carbon Rates 2018, shows that the carbon price gap is closing at a “snail’s pace.” The carbon pricing gap for a group of 42 countries surveyed in the study dropped from 83 percent in 2012 to an estimated 76.5 percent this year. We’re talkin’ 6.5 percentage points in six years.

This is how much more each country needs to tax emissions to meet their Paris goals and keep warming under 2 degrees C (the numbers are based off data from 2015, but the authors point out that, unfortunately, nothing has changed too much in the years since): 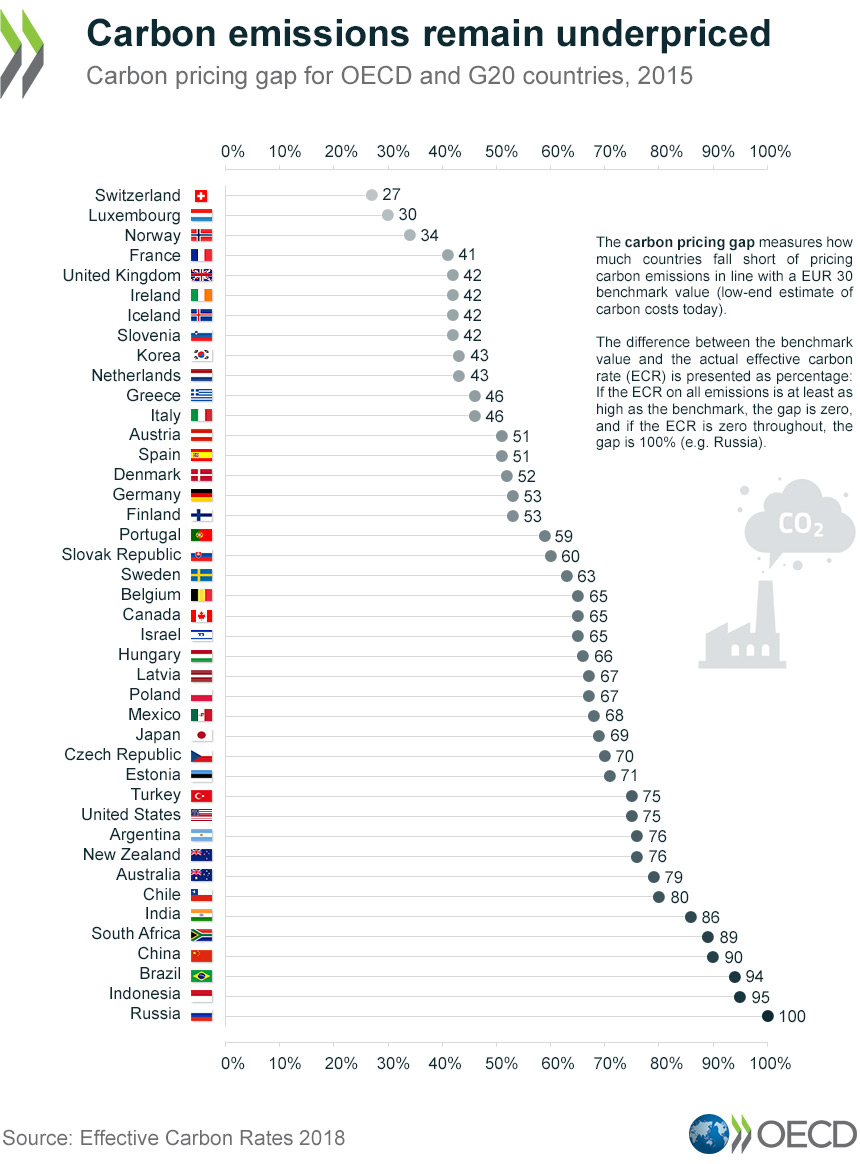 The Organisation for Economic Co-operation and Development

See? Pretty dismal. The countries that have the most work to do — Russia, Indonesia, Brazil — pollute a lot and have made virtually zero effort to price carbon. The countries with the smallest carbon gap — Switzerland, Luxembourg, and Norway — are nearly there. As you can see, most countries assessed in this report have a long way to go.

Here’s the good news: There are ways to close the gaps faster. China’s new emissions plan could reduce the country’s gap from 90 to 63 percent in the next few years. A handful of countries including the U.K., India, and South Korea implemented a variety of tactics to make some real headway on pricing emissions between 2012 and 2015.

And let’s not get bogged down with the percentages, says Jesse Jenkins, a postdoctoral fellow at Harvard’s Kennedy School with a decade of experience in the energy sector. “How do we make the most impact in the least costly way within the political constraints that we face in each country?” Jenkins says. In other words, closing the gap requires a custom-built approach.

And there are even more reasons to be optimistic that carbon pricing, in addition to other sustainability initiatives, could help us stave off the worst effects of global warming. California has one of the only economy-wide carbon pricing policies in the U.S. The Golden State appears to have a paltry carbon price — about $20 per ton — but its other green initiatives actually make it pretty competitive compared to other global winners in sustainability.

“The magnitude of the carbon price itself is not a sufficient proxy for how effective climate policy is across the whole context,” Jenkins says. “It’s one piece of the overall effort.”

The final stage of climate denial