‘Climate denial’ just made it into the dictionary. Wait, what? 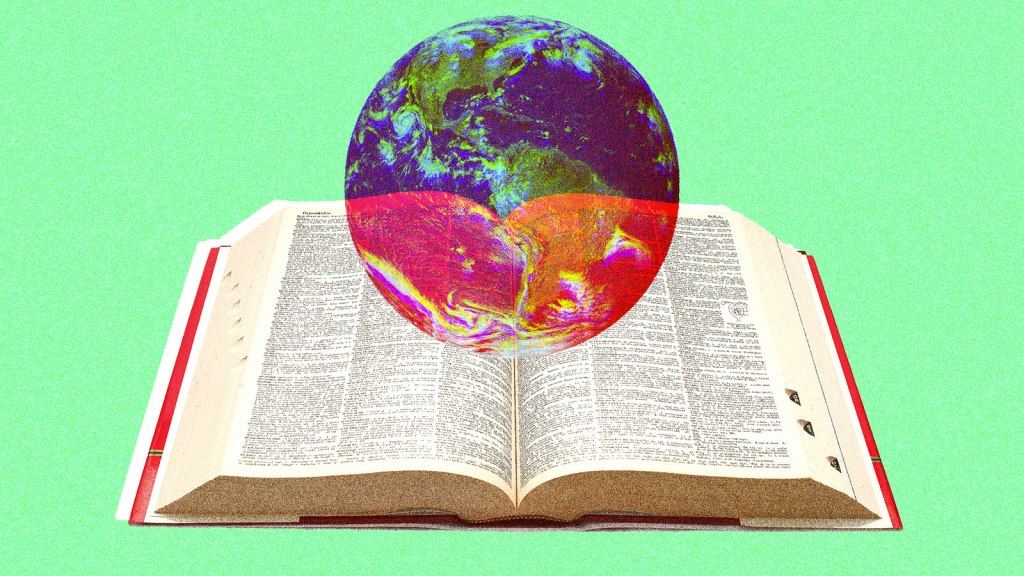 ‘Climate denial’ just made it into the dictionary. Wait, what?

The world is on fire, and so is our vocabulary. Merriam-Webster added 640 new words to its online dictionary last week. The additions include swole (“extremely muscular”), new meanings for snowflake (someone who is “treated as unique or special” or “overly sensitive”) and, you guessed it, a whole batch of neologisms tied to the environment.

“The work of revising a dictionary is constant, and it mirrors the culture’s need to make sense of the world with words,” the dictionary’s announcement reads.

Many of the new arrivals reflect the creative ways big corporations have found to trash the place. Our plastic pollution problem has brought us microplastic, “a piece of plastic that is five millimeters or smaller in size.” The natural gas industry (the folks who gave us “fracking”) introduced flowblack, “liquid used in fracking that returns to the surface after being injected into shale.” Then there’s omnicide, “the destruction of all life or all human life (as by nuclear war).”

Great, you say, any other downers? Of course! Bioaccumulation for the gradual buildup of contaminants, like pesticides and heavy metals, in an organism over time. And chronic wasting disease is an illness that afflicts deer, leading to weight loss, drooling, and listlessness.

For a more cheerful phrase, take bluebird day, “a day marked by cloudless blue skies.” Sounds lovely until you learn about the potential cloudpocalypse (not an official dictionary entry, I just made that up) in which a lack of climate-regulating cloud cover brings about a scary global-warming feedback loop.

Another nice one: petrichor, the name for that pleasant, earthy smell that fills the air after a rain. Contributing to that odor is geosmin — an organic compound created by soil- and water-dwelling bacteria.

The ever-expanding agricultural lexicon brought us a few new selections, such as the verb hydroseed, for the spraying of a liquid seed-mulch-fertilizer mix, along with the easy-to-pronounce insecticide called imidacloprid.

The big surprise for me was that Merriam-Webster’s new additions included two compound nouns, climate change denial and climate change denier. Wait, haven’t those phrases been in frequent use for a long time? The reason for their inclusion gives us a glimpse into the inner workings of the dictionary and the painstaking process of deciding what makes the cut.

“Traditionally, we limited the entries for compounds because we were always trying to conserve space in the printed dictionary,” Peter Sokolowski, Merriam-Webster’s editor-at-large, wrote in an email. The online dictionary lifts this limitation, enabling more space for compounds like screen time and go-cup.

But not all compounds make it into the dictionary. Sokolowski pointed to a “longstanding rule not to enter terms that we consider to be self-evident or self-explanatory.”

Consider the phrase cattle ranch. You can look up the definitions for cattle and ranch and deduce the compound’s meaning. That’s why the phrase isn’t in the dictionary. But dude ranch? A large farm for raising … men? Hence, dude ranch gets an entry.

Whereas the meaning of climate change denial is self-evident, the shortened form climate denial could be confusing for those who don’t spend their days thinking about our planetary crisis. Climate, after all, is just a word for the prevailing weather conditions of an area over time. Why would anyone deny the rain dropping on their head?

“Therefore, because the variant needed entry, the expanded form gets an entry even though its meaning is transparent,” Sokolowski said.

Speaking of transparent, one thing couldn’t be clearer: The climate is changing and humans are the cause, as sure as petrichor after a rain.