Why do some countries remain poor, despite the best efforts of governments and development experts?

“It’s because their children are getting off to a lousy start,” says Roger Thurow, a journalist and senior fellow at the Chicago Council. I spoke with Thurow about his new book, The First 1,000 Days, which makes the case that improving early childhood nutrition is the missing key to prosperity. It’s a simple idea with big promise for the poor and for the planet.

In a recent interview, we talked about how a shaky nutritional foundation is not only bad for children, but bad for everyone, and ruinous for the environment. Our interview has been edited and condensed for clarity. 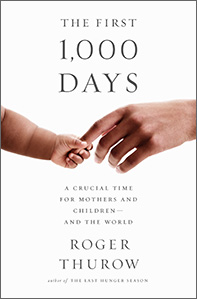 So when you ask the broader question: Why do some places remain poor? It’s because their children are getting off to a lousy start. There’s this stunting and underachievement that rolls through time and across economies. Ending stunting has always been the right thing to do morally. But it’s also the smart thing to do because this is really taking a toll on the global economy.

Q. At Grist we often talk about fighting poverty and suffering as an integral part of fighting climate change, but that’s not an obvious connection for everyone. Do you see that connection with your work?

A. I do. Increased extreme weather occurrences have tremendous impact on harvests. There’s a very strong connection between climate and the ability of small farmers to feed their families. And if farmers can’t feed their families their only option is often to expand their farmland by cutting down trees and plowing up land. Poverty exacts a real toll on the environment.

Q. When you looked at programs focusing on the first 1,000 days, what evidence did you see that they were working?

A. In Guatemala, this mom Maria Estella — she’s very worried about her first child Yesica because she’s smaller and she was behind some of the other kids in walking and talking. So when she got pregnant again she joined a nutrition class at a clinic. She gave birth to a very robust boy Jorge, and by the time he turned 2, he was basically the same size as his sister, who was coming up on 4. And the mom says he seems calmer, more curious, and further ahead developmentally.

So it doesn’t need to be from one generation to the next that these changes take place. You can do it between siblings in one family.

Q. When Americans think of malnourished children, we generally think of other countries, but of course it also happens here. What did this look like in Chicago?

A. It’s the same as the other countries I visited: Environmental conditions reinforce poverty, and it means kids are getting a lousy start in life. One of the reasons I settled on Chicago as an example is that I heard Chicago Mayor Rahm Emanuel speak about food deserts. He said, “I know there’s a nutritional aspect, but when I look at food deserts I also see them as opportunity deserts, job deserts, education deserts, health deserts, infrastructure deserts.”

Just like in other countries, there are all these socio-economic barriers to getting good nutrition, and that prevents good education, which affects the kids’ ability to make money and be successful. In Chicago one year, 20 to 25 percent of children entering kindergarten were overweight or obese. And that’s the manifestation of this malnourishment that’s happening in the 1,000 days.

Q. How are people putting the 1,000-days focus into practice?

A. In the past, there’s been very low investment in nutrition. Now there’s a new awareness among economists and finance people that, wow, this really has an impact on the prosperity of families, and countries, and the world, and on stability and security.

On the development side, a couple years ago USAID said that nutrition needs to be a central focus, because no matter what we are doing in health, or education, or infrastructure, that’s all dependent on nutrition. And the World Bank just a couple of weeks ago launched a new program for investing in nutrition. So we’re coming out of the days of ignoring nutrition at the start of life. Hopefully early childhood nutrition stays in the forefront.

The future of justice