For a tech startup, Josephine is pretty warm and cuddly. Start with the name. Rather than brashly announce the company as the embodiment of the future, like Magic Leap, or a declaration of superiority, like Uber, the founders of Josephine chose a name that sounds like a beloved aunt. It’s the right fit for a company that connects hungry people with neighbors who fix them home-cooked meals.

Josephine’s business model is based on a basic human connection: Invite someone into your home and feed them — or maybe hand them a to-go bag. “It’s an oddly intimate relationship,” said Lisette Silva, who started selling meals through Josephine then went to work in the corporate office. “My customers came into my home. They met me, met my children, my husband, and ate the food I’d made.”

Which is why Silva felt particularly wounded on April 25 when she started up the steps to her home in Berkeley, Calif. — her arms laden with chicken and vegetables for the night’s dinner — and saw a cease and desist letter taped to her door.

California law requires cooks who sell their food to prepare it in a commercial kitchen that complies with a 23-page checklist. These kitchens are subject to inspections by people like Don Atkinson-Adams of the Alameda County Department of Public Health. When I asked Atkinson-Adams if Josephine’s unusual business put it in a legal gray area alongside bake sales and potluck fundraisers he told me, “Some operations are a lot grayer than others. Josephine is not gray at all. They are clearly 100 percent not legal.”

Later that night, Silva called her customers to say she wouldn’t be cooking Ecuadorian stew with rice for them. She ended up preparing it anyway and fed it to the staff at Josephine. Other cease and desist letters followed on other doors. The company has stopped supporting direct food sales for the time being, and shifted to working with underground supper clubs, which are less likely to be shut down. It’s also expanding to other cities across the country.

Josephine’s chief operating officer, Matt Jorgensen, said it’s the law that’s out of line, not his company. It’s unreasonable to expect home cooks to pay tens of thousands of dollars to build a commercial kitchen, he said. That requirement slams the door in the face of entrepreneurs without piles of money — the people who sell food through Josephine are almost all women, a third of them are immigrants, and a quarter are people of color. Many worked in food service and wanted to strike out on their own, Jorgensen said. The regulations hinder them from climbing the economic ladder.

Baylen Linnekin, a lawyer and author of a new book on food law, Biting the Hand that Feeds Us, agrees. To build a more sustainable food system, we need to try new things, he said. But regulation often favors the old ways, whether we are talking about seed breeding or food delivery. “Unshackling small food entrepreneurs is a great way to unshackle sustainable food,” Linnekin said. 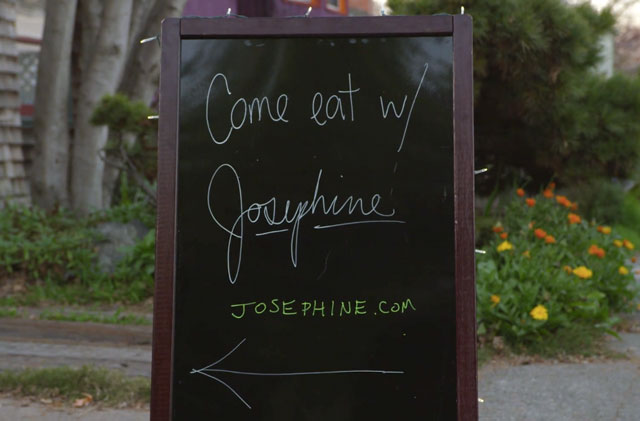 Food safety regulations may slow things down, but hardly anyone wants to do away with them entirely. The problem is that there are some regulatory hurdles that businesses have helped erect simply to protect themselves from competition. Take, for instance, the requirement that you must receive a cosmetology license before braiding hair in Utah. Other regulations, such as seat-belt laws and those that keep tuberculosis out of our milk, do a lot more good than harm. In a rapidly warming world, where the status quo puts us on track to disaster, we want to encourage people to try a lot of new things. So how do we balance the goal for freedom of innovation against the risk that always comes with experimentation?

Atkinson-Adams from the county’s health department wasn’t wrestling with these big picture questions when he sent those cease and desist letters. In our conversation, he was open, affable, and reasonable. He just knew that his department kept telling Josephine that it was violating the law and that the company kept adding new cooks. Then a customer got sick. The timing and symptoms suggested that this person had eaten a meal made by a Josephine cook, prompting the health officials to take action. “Our intent is not to beat people up, it’s to try and make people safe,” Atkinson-Adams said. “When a company bypasses the third party — our — view of the system, that’s a concern for us.”

Jorgensen said that authorities never informed his company of an alleged illness, and that if they had Josephine would have alerted cooks and customers, and investigated.

The company already had safety measures in place. It requires cooks to take the online class mandated for all food handlers in the state, meets with every new cook, and provides customer reviews as a sort of crowd-sourced inspection. Cooks prepare food for a small group of people, usually 10 to 20, which should limit the number of illnesses from any outbreak. And perhaps there’s less of a need for inspections when the customers have a chance to inspect the kitchens every time they pick up a meal. 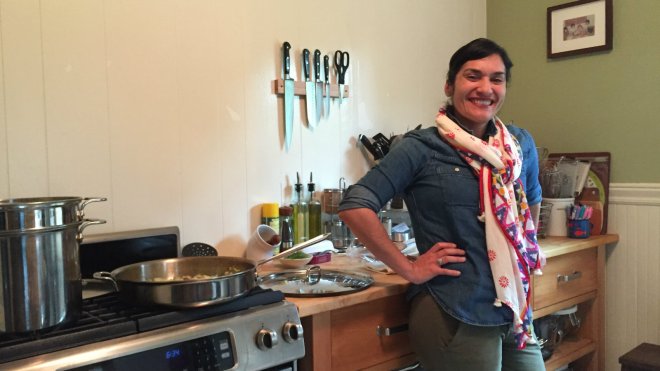 That’s the sense I had when I went to Silva’s house on a weekday evening. She was boiling pasta in a tall stainless steel pot and sautéing fennel. Her son had finished his homework and was watching a video in his bedroom a few feet away. Jazz guitar drifted from speakers hidden away in the tastefully decorated little home. I sat at her wooden kitchen table and scribbled in my notebook while Silva fielded my questions and sliced bread and cheese for me to nibble, all while effortlessly moving the meal toward completion. I found that I was reluctant to leave when it was time to go — it felt like I was tearing myself away from a dinner party before the meal had been served. It was impossible for me to worry about the lack of stainless-steel countertops or official inspections.

So is there any way to combine the human touch and sensible safety rules? What’s the right balance? When I put that question to Josephine’s Jorgensen, he pointed out that his company had an overwhelming incentive to protect its customers: It’s bad for business to make people sick. Of course, I’ve heard the same thing from just about everybody in business I’ve interviewed, and I’m not convinced that market incentives are enough.

As it happens, Jorgenson agreed, and said he’d been working on an idea with several policy experts to institute trial regulations. It would be something like a local government program to run experiments with new rules. If you have a reasonable argument that your business doesn’t fit into the existing code, you might get a test-run with an alternative code.

Maybe the real problem is that it’s too hard to make rules and also too hard to get rid of them. We often make laws through pitched political battles, so positions become entrenched before anyone fully understands the consequences. Perhaps the key to balancing innovation and regulation is to be more experimental in governing. If there was some channel for running regulatory experiments, it would help us figure out which regulations really are needed, and which we could live without.