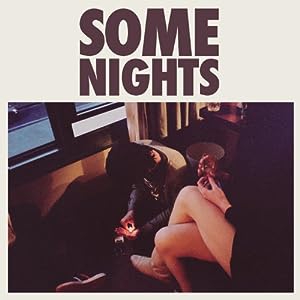 One of my favorite albums of 2009 was Aim & Ignite by a band called fun. In an indie music scene filled with mopey mumblers, it was a bright burst of color, “symphonic, gleefully over-the-top power pop” as I called it. It was a bit Queen, a bit Elton John, a bit camp … oh, let’s just say it: it was super duper gay. In a good way!

I often thought fun.’s music would be well-suited to the show Glee — and sure enough, last December, the show featured one of their songs, from the then-unreleased sophomore effort. That made them a big hit with the younger set and raised enormous hopes for the album.

It’s out now: Some Nights, produced by Jeff Bhasker, who’s worked with Jay-Z, Kanye West, and Alicia Keys. They’ve gotten more ambitious even as they obviously grasp for mainstream success. The songs mix pop, rock, hip-hop, soul, and sheer melodrama into one soaring anthem after another. It’s just outrageously entertaining.

This is the song that made them famous, “We Are Young.”

Here are those crazy Glee kids doing the song: