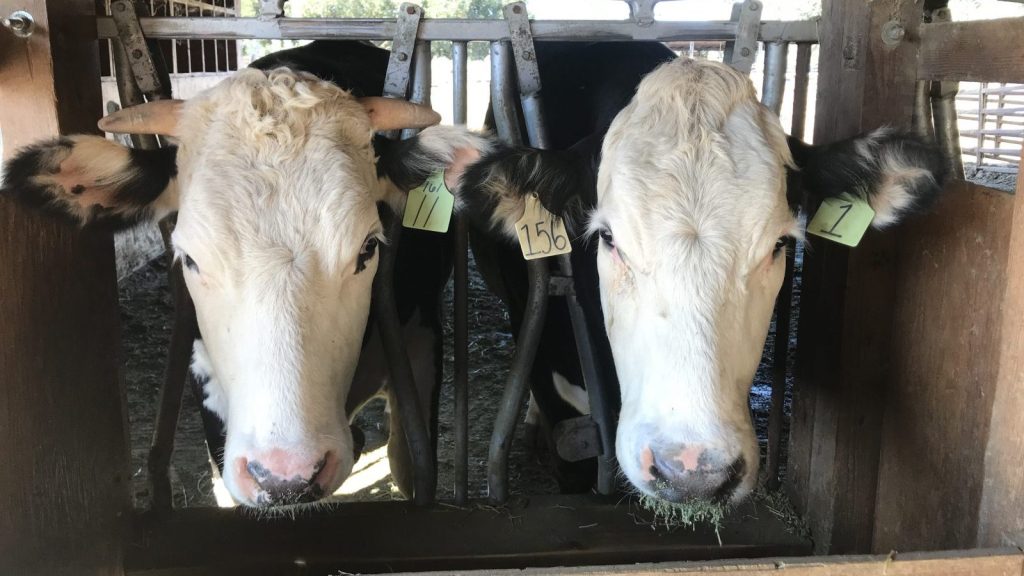 Two heifers at the University of California Davis. One of these cousins has the genetic code to prevent horns from growing and one does not. Photo by Alison Van Eenennaam.
bumps on the head

For the last few years, writers and scientists have marveled at the potential for gene editing to allow farmers to grow more food on less land and allow more of the earth to grow carbon-sucking forests and savannas.

The main advantage of gene editing is precision. It’s right there in the name: Instead of dealing with the randomness of breeding, or the rough power-tool work implied by the term “genetic engineering,” the “editing” suggests that scientists could now change the letters of genetic code with the same ease that a writer corrects typos.

But in late July, FDA scientists found a chunk of bacterial DNA in gene-edited calves, prompting people to wonder if this precision tool wasn’t as precise as advertised. That hopeful vision of a gene-edited future — verdant with pesticide-free, carbon-sequestering crops — flickered.

On Monday, the scientists studying these gene-edited cattle published a paper in the journal Nature Biotechnology explaining what happened. Essentially, this new paper tells us that gene editing precisely tweaked specific letters of DNA, exactly what it was supposed to do. But scientists also used older, cruder tools, and one of those caused the genetic typo. Even so, the end result might be that gene-editing slides into the muck of controversy over GMOs.

To be clear, the cows at the center of this study have nothing to do with creating more productive, pest-resistant foods. The scientists had edited their genes in stem cells, which grew into calves without horns. Farmers usually remove the horns to prevent cattle from injuring each other — goring is a real danger.

When I visited the University of California Davis in 2015, I saw a pair of these black-and-white bull calves standing and chewing in an outdoor pen, like ordinary but adorable bovines. Unlike other calves, however, they wouldn’t have to suffer through a painful dehorning operation, in which a veterinarian burns out their horn buds.

Some cows are naturally hornless: Angus and Hereford breeds, for instance. But those are beef cattle. For dairy you want Holsteins or Jerseys, and these champion milk producers are more carefully bred than the winners of the Westminster dog show. If you started crossing muscled Herefords with black-and-white Holsteins, it would take decades of breeding to move the hornless trait into the dairy line then weed out all the beefy traits.

What if you just plucked a single gene and moved it into dairy cows? With gene editing, you could tweak dairy cows without messing up their finely tuned milk-producing DNA so that they would no longer have to endure dehorning. The Minnesota-based company Recombinetics tried this using a technique called TALENS (you might have heard of CRISPR — this is just a different version of the same thing).

To run with the editing metaphor, Recombinetics basically took out the DNA that laid out instructions for “HORN” and replaced it with 202 letters of DNA that said “HORNLESS.” But first, they attached it to a bacterial plasmid — think of it as a sub-cellular copy machine — that would reproduce this strand over and over again (HORNLESS, HORNLESS, HORNLESS!). Then they injected all those copies into a cow cell — that gave one of those copies a much better chance of bumping into the one spot in the DNA that read HORN. This is where things went wrong. Instead of just replacing HORN with HORNLESS, the plasmid also folded into the cell’s DNA so that it read something like HORNLESS-COPYMACHINE-HORNLESS. That genetic information went into an egg, which went into a cow’s uterus, and, in 2015, grew into a hornless calf. No one noticed until years later.

The calves I saw at Davis were there to be studied by Alison Van Eenennaam, an animal geneticist. Funded by a U.S. Department of Agriculture program to assess the risks of biotech, her team first verified that the hornless trait was being passed down through generations of cattle. “Basically, we found that Mendel knew his shit,” said Van Eenennaam (that’s Gregor Mendel, the scientist from the 1800s who described how traits are inherited).

With this new paper, Van Eenennaam’s team showed that the bacterial plasmid had also been passed down to some of the calves, again following the rules of genetics 101. It doesn’t seem to be causing a problem — it’s fairly normal for DNA from germs and viruses to work its way into genomes (the human genome is about 8 percent virus DNA), and critters can usually just roll with it. But because these cattle had DNA from a bacteria, it meant they were genetically modified organisms, or GMOs in the eyes of government regulators. That, in turn, meant they would have to undergo years of testing. A giant corporation like Bayer could afford that, but not a small startup like Recombinetics. The FDA is now treating gene-edited animals like new drugs, requiring multiple rounds of safety testing, which effectively puts an end to the quest to make hornless dairy cows. Longtime opponents of biotechnology think that would be a good thing. Friends of the Earth recently released a report with Janet Cotter, who runs the consultancy Logos Environmental, condemning gene edited animals.

“The scientific evidence shows that gene editing, particularly in animals, is far from precise.” Cotter said in a statement. “Instead, it can produce unintended changes to genetic material and disrupt genetic processes. Such effects could have far reaching consequences for food safety, so these applications will require a rigorous assessment if they are to be used in agriculture.”

It would be easy enough to screen out plasmids before putting gene-edited eggs into a cow’s womb. That’s a routine procedure, said Van Eenennaam. But she worries that won’t quell fears that gene editing is sloppier than expected. Treating gene-edited animals like drugs is not proportionate with the risk, Van Eenennaam said, and would prevent breakthroughs that might help us meet the challenge of climate change, whether it’s cows that don’t belch methane, or corals that can survive heat., Van Eenennaam said.

“The debate has pretty much blocked the technology in animals through my whole career. I was hoping gene-editing would be different,” she said. “I have students who are excited about gene editing for disease-resistance — but now I feel like it’s Ground Hog Day. Here we go again.”