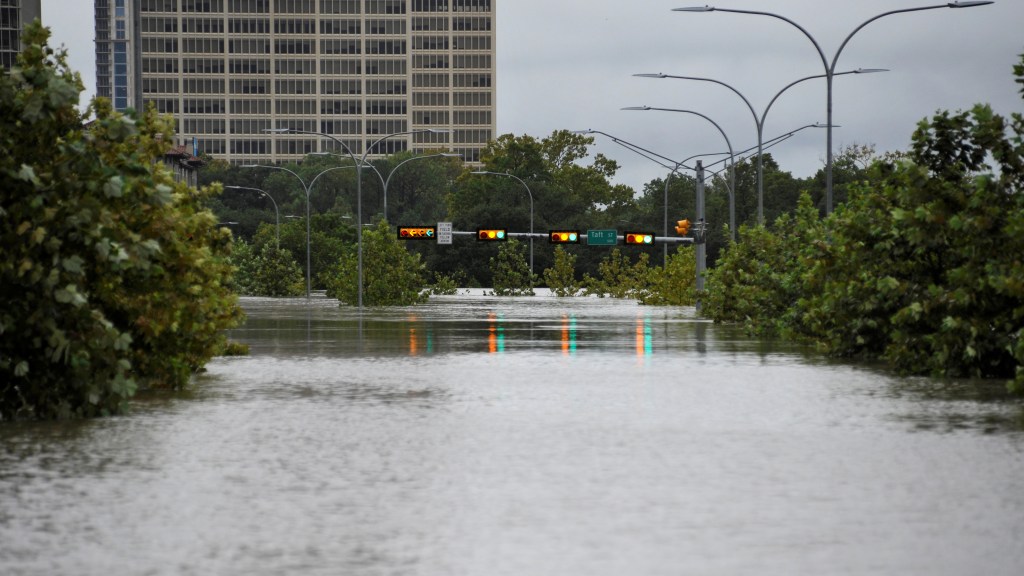 In 1935, a storm swept through Houston, turning parts of the city into a lake. It was a wake-up call to city officials; they needed to get serious about flood control. About a decade later, the U.S. Army Corps of Engineers finished building two massive reservoirs west and upstream of the city. For the better part of a century, the Addicks and Barker dams have held back water that would have otherwise surged through Buffalo Bayou, the flood-prone waterway that snakes through downtown Houston before dumping into the Ship Channel.

This week, for the second time in as many years, a storm has pushed the Addicks and Barker dams to their limit. Early Monday morning, as Tropical Storm Harvey lingered over Houston and drowned whole swaths of the city, the Army Corps of Engineers began controlled releases from the dams, the first time they’ve done so during a major storm. By Monday afternoon, several neighborhoods near the reservoirs were under voluntary or mandatory evacuation as officials announced that releases from Addicks and Barker would continue for the foreseeable future. By early Tuesday morning, Addicks had topped the dam’s 108-foot spillway, leading to what officials call “uncontrolled releases” from the reservoir. Some homes could be inundated for a month.

Harris County Flood Control District meteorologist Jeff Linder called the releases the least-worst decision officials could make in light of floodwaters that continue to fill the reservoirs faster than they can safely drain. “If you are upstream of the reservoir, the worst is not over,” Linder said at a Monday afternoon press conference, warning that “water is going to be inundating areas that have currently not been inundated.” When someone asked him, via Twitter, whether the dams could break and trigger a Katrina-like disaster, Linder offered a one-word response: “No.”

That assurance comes despite the Corps of Engineers labeling the dams an “extremely high risk of catastrophic failure” after a 2009 storm that saw only a fraction of the rain Harvey poured on Houston this week. Officials insist that the hair-raising label has more to do with the breathtaking consequences of any major dam failure upstream of the country’s fourth-largest city than the actual likelihood of such a breach. In 2012, they detailed how a dam failure during a major storm would cause a multi-billion dollar disaster that turns the city into Waterworld.

Still, the Corps in recent years has implemented only piecemeal fixes to the earthen dams, including a $75 million upgrade that was underway before Harvey hit this weekend. Officials are barely even discussing how to fund a third reservoir that some experts say the region desperately needs.

This is the second year in a row that severe floodwaters have tested Addicks and Barker. Just last year, during 2016’s so-called Tax Day Flood, for the first time, the reservoirs hit and surpassed the level of a 100-year flood. That happened again this weekend, meaning the dams have seen two extremely rare flood events (at least one-in-a-100-year events) in just as many years. Last year was also the first time the National Weather Service ever issued a flood warning for the Addicks and Barker watersheds.

The dams are in some ways emblematic of how flood planning in the Bayou City hasn’t kept up with the region’s booming population and development, even as experts predict that climate change will dump increasingly severe storms on Houston’s doorstep with greater frequency. They were built in a region of water-absorbing prairie grasses that have in recent years been paved over by water-impermeable parking lots, driveways and suburban streets. The Sierra Club even sued the Corps in a failed attempt to stop construction on a nearby stretch of the Grand Parkway, a major toll road project that some opposed fearing it would coax development in an area that’s critical to the region’s flood control efforts.

Still, as the Texas Tribune and ProPublica pointed out in this 2016 investigation, Houston-area flood officials refuse to connect the region’s flooding problems to poorly planned development. As a result, every year people will keep building hundreds, if not thousands, of additional structures in Harris County’s 100-year floodplains, even as those “rare” storms start to hit year after year.

In a Monday press conference, Edmond Russo, an engineer with the Corps’ Galveston district, said officials wanted to keep high water from building up and going over the Addicks and Barker spillways, “because in that case, we do not have control over the water.” He’d hoped releases would stay low enough so that the already overtaxed Buffalo Bayou stays at the same level in the short term. In the long term, officials say it could take one to three months to totally drain the reservoirs.

Of course, that all depends on what happens in the coming days. Updating reporters on the reservoirs’ status Monday evening, Linder said more heavy rainfall or levee breaches upstream could change how fast the dams must release water downstream.

“Our infrastructure is certainly being tested to its limits,” Linder said.