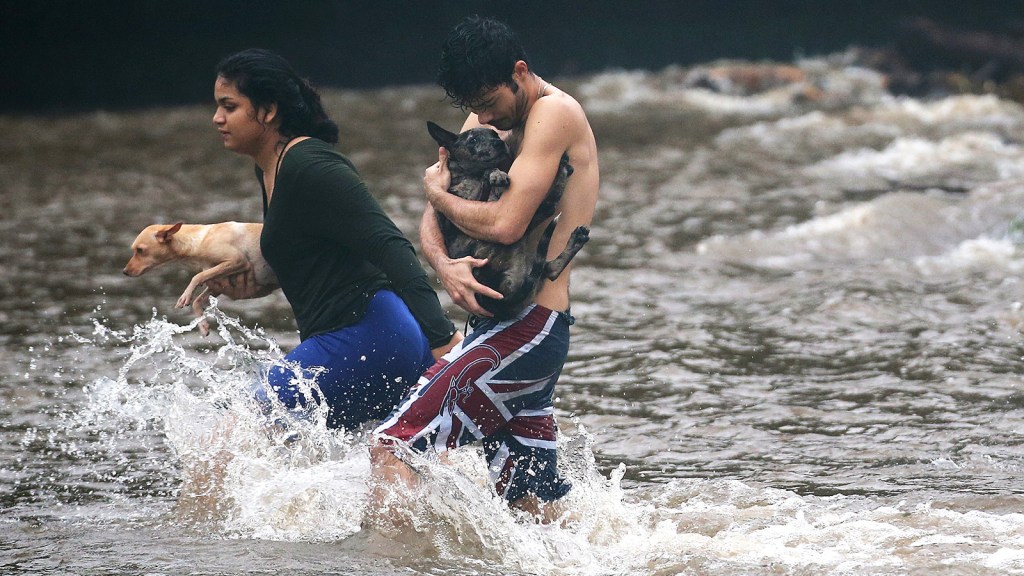 A rare hurricane is dousing Hawaii, producing flooding, power outages, and washing away roads — damage the National Weather Service is calling “catastrophic.” It’s increasingly clear that the Aloha state is already feeling the effects of a changing climate.

As of Friday morning, Hurricane Lane is at Category 2 strength and continues to move towards Oahu, home to Honolulu and Hawaii’s most densely populated island. Though the latest projections showed Lane’s center remaining offshore, the most powerful side of the storm will still wash over nearly all of Hawaii’s main islands, bringing torrential rainfall for more than 24 hours to a million people.

As Lane approached Thursday evening, civil defense sirens pierced the cloudy Honolulu skies and federal officials pre-staged plane-loads of supplies in the country’s most isolated state, hoping to prevent a repeat of the government’s bungled response to Hurricane Maria’s in Puerto Rico. The Big Island has been hardest hit so far with rainfall exceeding 30 inches, transforming normally tranquil waterfalls into violent torrents.

We are being evacuated. The neighborhood is too dangerous as the water from the Wailuku River keeps rising. Fire, police and county officials want us to move about 100 feet down the hill. There are still people stranded in homes. #HurricaneLane pic.twitter.com/93WqBeTI2f

As a result of Lane’s slow motion, the National Weather Service in Honolulu has boosted its maximum rainfall prediction to 40 inches in some parts of the islands — months worth of rain, even for Hawaii’s lushest locations. In an update late Thursday Hawaii time, the NWS said Lane is “expected to lead to major, life-threatening flash flooding and landslides over all Hawaiian Islands.”

There has never been a hurricane landfall in Maui or Oahu in recorded history. Even if Lane doesn’t achieve that feat, it’s already the closest a storm has ever approached central Hawaii. Water temperatures near Hawaii are as much as 4.5 degrees F warmer than normal this week, supporting Lane’s high winds and heavy rains.

As the waters of the Pacific warm, heavy rainfall has become an increasingly dangerous problem for Hawaii. Lane is Hawaii’s second major flooding disaster this year, after torrential rainfall on Kauai in April produced nearly 50 inches in 24 hours, a new U.S. record. Our warmer atmosphere can now hold more water vapor, resulting in heavier rainfall during both regular thunderstorms and hurricanes. Since the 1950s, the amount of rain falling in the worst storms in Hawaii has increased by about 12 percent, according to a University of Hawaii study.

As the the country’s only ocean state, Hawaii is on the front lines of climate change. Hurricane Lane is the latest example that Hawaii’s warmer, wetter reality is already here.