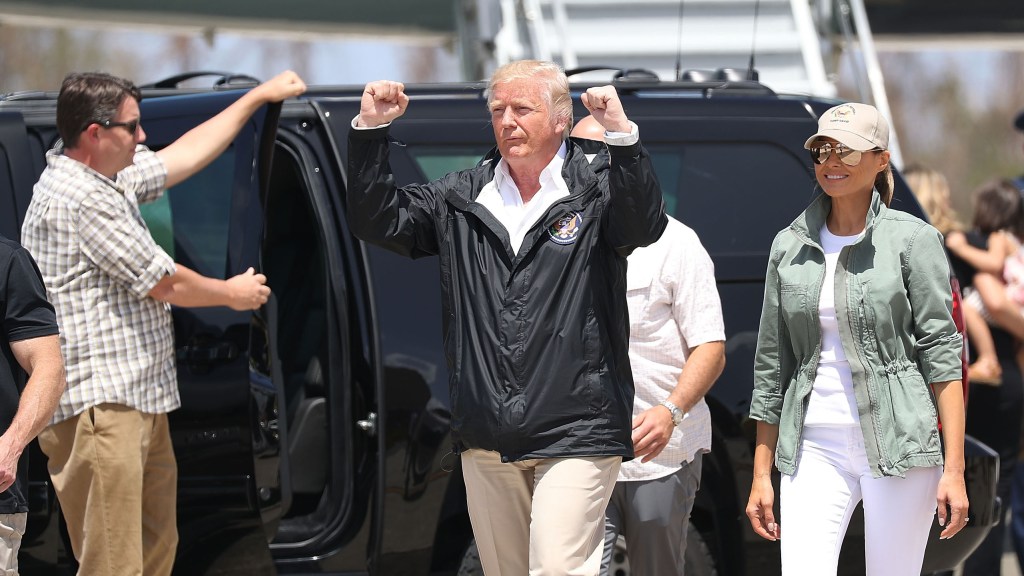 It wasn’t until five days after Hurricane Maria made landfall that President Trump tweeted about the devastation. FEMA administrator Brock Long arrived in Puerto Rico that same day — he was among the first Trump officials to get to the battered U.S. territory.

This week, a Harvard study revealed that the September 2017 storm is likely the deadliest disaster in modern U.S. history — with more casualties than Hurricane Katrina and the 9/11 attacks combined. The analysis places Puerto Rico’s death toll at somewhere between 4,645 and 5,740 people, 90 times more dead than the government’s widely disputed official death toll.

The president has yet to offer any public condolences on the death count in the new study. He has, however, tweeted vigorously in the wake of Roseanne Barr being fired to Disney CEO Bob Iger demanding an apology for “HORRIBLE” statements made about him on ABC.

“What if 5,000 people in any US state died because of a natural disaster? It would be 24/7 news. Well, that happened in #PuertoRico as a result of #HurricaneMaría, and we are now talking about a mediocre sitcom being cancelled,” tweeted journalist Julio Ricardo Varela.

Writing in an opinion piece for NBC news, Varela continued: “Puerto Ricans are not suddenly shocked by the Harvard study … because the proof was already there months ago. But almost nobody else wanted to look for it.”

Trump’s only visit to the island after the storm — when he said that Maria wasn’t a “real” tragedy like Hurricane Katrina — Varela writes, “served to highlight the late response and federal neglect to Puerto Rico’s catastrophe.”

The president’s inattention, critics argue, contributed to a disaster response that was slow, meager, and ripe with allegations of misconduct and corruption. And rather than drive compassion for fellow Americans, his priorities have helped shift attention elsewhere. Cable news dedicated more than 16 times more airtime to the Roseanne controversy than it did to the Puerto Rico death toll.

Because of the silence, Refinery 29 journalist Andrea González-Ramírez has started a viral thread on Twitter in an effort to remember and name the dead:

Since the news cycle and Twitter dot com apparently already forgot about the 5,000+ people who died in Puerto Rico after Hurricane Maria, I'm going to spotlight the stories of our dead. #4645boricuas

“This should be a day of collective mourning in Puerto Rico. Thousands dead because of administrations that could not get the job done,” San Juan Mayor Carmen Yulin Cruz tweeted on Tuesday. “These deaths & the negligence that contributed to them cannot be forgotten. This was, & continues to be, a violation of our human rights.”

And with Hurricane Season 2018 beginning today, there’s still uncertainty about how prepared this administration is for another storm. Puerto Rico’s power authority announced yesterday that it may take another two months to get power back completely on the island, and officials say it’s likely that the electrical grid will crash again with the next hurricane.

On top of that, FEMA is going through a “reorganization,” Bloomberg reported last week, and several key leadership roles are still vacant or temporarily filled.

“What the impacts from the 2017 disasters show is that there is also still work to do in order to build a culture of preparedness across the country at all levels of government, including improved resilience among our critical infrastructure,” FEMA wrote to Grist in an email.