Help! I don't know how to recycle anymore. 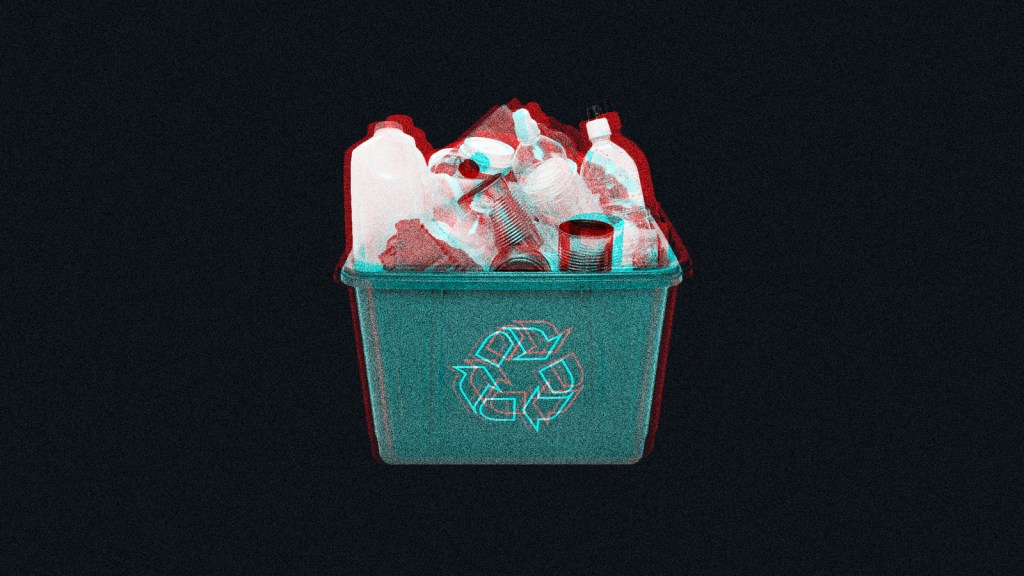 Help! I don’t know how to recycle anymore.

Recycling seems like it’s getting more complex. Can you update us on where our plastic and paper goes when we toss it in recycling bins? And what about the complicated stuff, like that paper packing tape that Amazon uses now (which may include fiberglass)? Or the film that they wrap vegetables in at the grocery store?

The United States produces so much waste — more than 2,500 pounds per person per year, according to one estimate. That amount of refuse is way too much to process here on home soil, so we have been shipping a lot of our recyclables overseas to China, Malaysia, the Philippines, and other East Asian countries where they’re processed and resold.

About a year ago, the Chinese government announced that it was cracking down on our recycling exports because, well, they were getting a whole lot of trash and perilous little useful material. The new policy has the mildly threatening name “National Sword.”

Maybe you’re thinking: Rude! How dare the Chinese government call all that valuable plastic “trash?” (I mean, you did throw it away.)

I challenge you to go look in the recycling bin at your home, your office, your neighbor’s driveway (be quiet about it), and tell me what you find. If you see anything with food scraps in or on it, anything made from a combination of materials (like those pasta boxes with the cellophane windows), any bits of that weird filmy plastic that’s all over everything in the grocery store produce section, anything with styrofoam — well, none of that belongs in curbside recycling. It actually has to be taken to a special facility to be recycled; if it ends up curbside, it just goes in the trash.

This mess is partially thanks to a common American practice called “single-stream recycling.” It’s easy: You just throw everything in the same big bin and hope that it ends up getting recycled. Some people call this scheme “wishcycling.” You basically wish a piece of waste will get recycled, and call it a day.

But as products and packaging have changed and become even more complex and multi-layer — with paper, plastic, and metal all mixed together seemingly in one inscrutable sheet — that’s made recycling much harder. Thus, most of that “wishcycled” stuff ends up in the landfill.

I toured a Seattle recycling plant last year before National Sword took effect, and the facility manager told me something that I will not forget: If a shipping container full of recyclables headed to China has some rotting food in it — as in, someone didn’t rinse their takeout container or clean out their smoothie jar — the entire thing will be sent back! And transporting the same container both ways across the Pacific is not exactly a low-carbon endeavor. So not only are you not recycling that piece of plastic, you’re contributing to climate change. (Tsk.)

But for years and years and years, American consumers never thought twice about what they threw away. It was China making its big “No thanks!” announcement that has forced us to realize that what we discard may actually not have any greater destination than the landfill. It’s like atheism, for waste.

Post-National Sword, municipalities across the country have to reconfigure the way they deal with waste because the “send it and forget it” method doesn’t exist anymore. Monica Wilson, policy and research coordinator with the Global Alliance for Incinerator Alternatives, a non-profit that promotes solutions to waste and pollution, admits that this new reality is confusing for consumers.

“It might sound frustrating to the consumer, but this is a really important moment to demand better of the companies that sell products to us,” says Wilson. “Have them use systems that work, that are economical, but that don’t make a ton of waste at the end of the day.”

Those demands could start with actions like asking your local grocery store if it carries products with less packaging. It’s a not-so-subtle cue that there’s demand for those items. “Recycling companies are only reacting to the products that companies make, and we need manufacturers to design products that are good for our health and our planet from the start,” says Kate Bailey, policy and research director of the Colorado-based non-profit recycler Ecocycle.

Local coalitions across the country have pushed for bans of things like single-use plastic bags at grocery stores, polystyrene (aka: hard or impossible to recycle takeout containers), and — controversially — plastic straws. Most notably, the city council in Albuquerque, New Mexico, proposed a comprehensive ban just this month that would be the first to tackle a whole buffet table’s worth of single-use plastics at once — straws, takeout containers, plastic bags.

And what can you do when faced with your own inscrutable black box of a recycling bin? For starters, the way recycling works is not a state secret — you can look up your municipality’s solid-waste collector’s instructions for what’s recyclable and what isn’t and pin it over your collection bins at home. Taking a few seconds to figure out where your coffee cup goes can save a lot of time and energy for the waste-sorting facility down the line.

And — this may be the hardest pill to swallow — when in doubt, just throw it in the garbage.

“Aaaahhhh!!” you may be screaming, “but it will go in the landfill!!! As TRASH!!!” The hard truth is that a lot of what you thought was recyclable is actually just trash. Accepting that is an important step toward reconfiguring what you do with all the things you touch. If you believed that air bubble-lined Amazon envelope belonged in the recycling bin with your beer bottles and magazines, you were convincing yourself that it wasn’t wasteful. (That’s a nice thought for Amazon, but not our waste system.)

Maybe acknowledging that so much of what we use ends up as trash — rather than being spun into $100 athleisurewear — is the first step to just using less of it. And that is the ultimate goal.