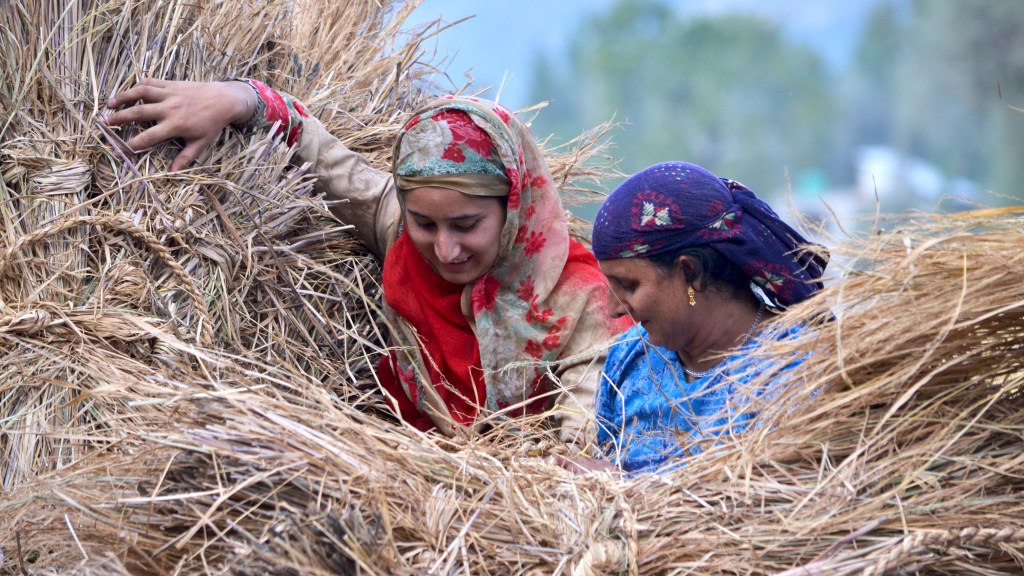 “Gender and climate are inextricably linked,” said environmentalist and author Katharine Wilkinson on stage at TEDWomen last week, a gathering of women thought leaders and activists in Palm Desert, California.

Women, she says, are disproportionately affected by climate change. When communities are decimated by floods or droughts, tsunamis or fire, the most vulnerable among them suffer the most. Because women across the world have fewer rights, less money, and fewer freedoms, in those moments of extreme loss, women are often hit the hardest. “There’s greater risk of displacement, higher odds of being injured or killed during a natural disaster. Prolonged drought can precipitate early marriage, as families contend with scarcity. Floods can force last-resort prostitution as women struggle to make ends meet. These dynamics are most acute under conditions of poverty,” she says.

With several new reports painting an increasingly bleak picture of the state of the world’s climate, Wilkinson is delivering her message at a time when leaders on the global stage are looking for solutions. As thousands of people gather this week at a major climate summit known as COP24, Wilkinson is making a plea to open people’s eyes to one fact: Women’s rights are Earth’s rights. “In my experience, to have eyes wide open is to hold a broken heart every day,” she says.

But she has hope. Though women feel the effects of climate the most, they also represent an opportunity. “To address climate change, we must make gender equity a reality. And in the face of a seemingly impossible challenge, women and girls are a fierce source of possibility,” Wilkinson says. She and her team at the nonprofit Project Drawdown have been studying the real-world steps people can take to fix climate change, resulting in a best-selling 2017 book highlighting the top 100 solutions to reverse warming.

Her argument is that if women are empowered in three distinct ways, the downstream effects on the environment will make a huge difference in the fight for climate change. She argues that if women were treated more equally professionally, they’d have fewer kids and the land they farm would be more efficient, all of which would help save the planet.

“Women are the primary farmers of the world,” Wilkinson says. They produce 60 to 80 percent of the food in lower-income countries, she says, on small plots. These farmers are known as “smallholders.”

Yet due to local laws and entrenched biases, women farmers are given fewer resources and support from their governments, and they have fewer rights to their own land. For example, in some countries women are not allowed to own their own land, which makes it impossible for them to use the land as collateral for a loan to buy farming equipment. In other places, women are are not able to borrow money without a man’s signature. These restrictions hamper their ability to run their farms efficiently, leading to lower yields.

This is a problem not just for their earning potential, but for the Earth. Every year, humans clear-cut forests to create more agriculture land to grow crops to feed the world’s growing population. In turn, this deforestation increases the rate of climate change.

Instead of clear-cutting new land, why not work to make the existing farms run by women more efficient? “Close that gap and farm yields rise by 20 to 30 percent,” says Wilkinson. “Support women smallholders, realize higher yields, avoid deforestation, and sustain the life-giving power of forests.” If women’s farms yielded as much on average as farms run by men across the world, it would stop approximately 2 billion tons of CO2 from entering the atmosphere between now and 2050. “That’s on par with the impact household recycling can have globally,” she says.

Besides addressing inequality in agriculture, Wilkinson says giving women access to high-quality voluntary reproductive health care would have tremendous benefit for the climate.

“Curbing growth of our human population is a side effect,” she says — one that would reduce global emissions. Do that by making birth control and medical care more available to women across the world.

And do it by educating women. Wilkinson notes that more than 130 million women worldwide are denied access to school. Yet the more education a woman attains, the fewer children she has. From a conservation perspective, empowering women to have smaller families is an objectively positive outcome. “The right to go to school effects how many human beings live on this planet,” says Wilkinson.

With these three changes — empowerment of women farmers, increased global access to family planning, and the right to an education — Wilkinson and her team at Project Drawdown predict that by midcentury, improving gender equality could equal 1 billion fewer people on Earth.

“Gender equity is on par with wind turbines and solar panels and forests,” Wilkinson says, adding, “This does not mean women and girls are responsible for fixing everything. But we probably will.”