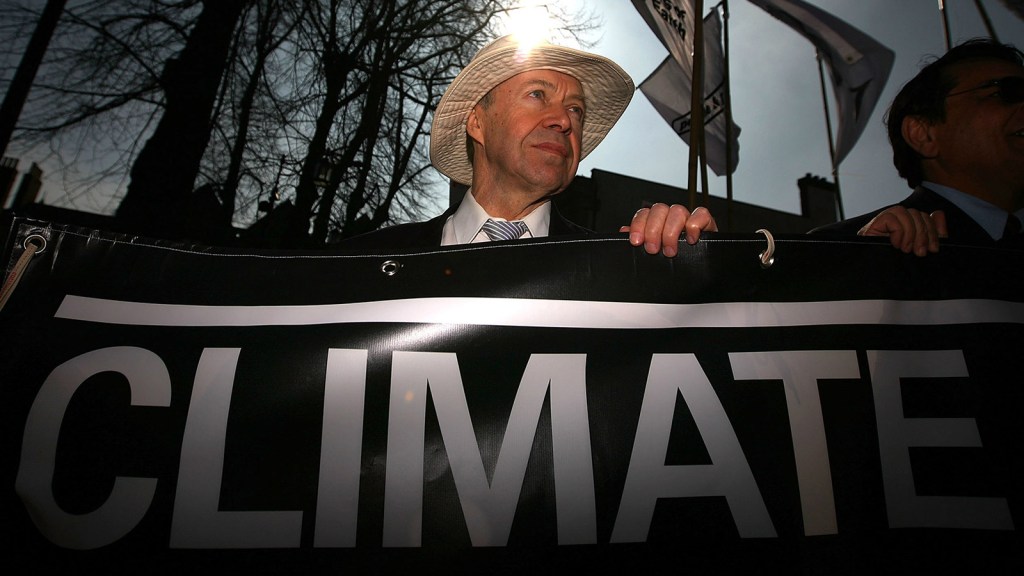 Former NASA scientist and climatologist James Hansen takes part in a mock funeral parade during a Climate Change Campaign Action Day on March 19, 2009 in Coventry, England. Christopher Furlong / Getty Images
If I could Turner back time

Most activists are relieved if a judge frees them from the charges brought against them. But when the tar sands “valve turners” found out last week that they had been acquitted, they had a different reaction — disappointment. They had hoped to use the trial to discuss the global climate threat posed by the controversial pipelines.

On October 11, 2016, this small group of activists manually shut down multiple pipelines carrying oil from Canadian tar sands to the United States. Reuters called it “the biggest coordinated move on U.S. energy infrastructure ever undertaken.” It wasn’t exactly “Mission Impossible.” More like Mission “righty-tighty.” They simply snuck into the stations in Washington, Montana, North Dakota and Minnesota and turned the valves clockwise to halt the flow of crude oil.

The “valve turners,” as the group came to be called, knew they’d be caught — they even called the operating companies 15 minutes before turning the valves to tell them what they were about to do. They wanted a proper trial as a kind of public forum to discuss the urgency of climate change. As one of the activists, Emily Johnson, told Democracy Now, “You know, we very much wanted everyone to be able to hear—for our jurors to be able to hear—from our expert witnesses.”

CHARGES DISMISSED. I have to admitâ€”my heart is a little heavy: this is not the trial we came for, & I was so looking forward to letting a northern MN jury hear our story, & hear our witnesses.

But given that the court nixed that possibilityâ€”it's nice not to be going to prison. pic.twitter.com/8ACu49phjQ

But on Tuesday of last week, just as their trial was getting started, the group was acquitted of all charges. Not to be deterred, one of the key experts who would have been called in the trial has made his would-be testimony public.

Former top NASA climate scientist James Hansen repurposed his testimony as an op-ed for the Denver Post. In the article, he describes the many ways we can observe climate change now: the spate of record-breaking hurricanes fueled by warming oceans, the way that bark beetles—a beneficiary of climate change—have destroyed millions of acres of Colorado forests, and how the island nation of Kiribati has had to negotiate to relocate all 103,000 of its people.

Hansen, who was arrested in 2011 at the Tar Sands protest, wanted to highlight the dire necessity behind the valve turners’ actions. He wrote, “[A]s I was prepared to swear under oath this week, we need to leave the vast majority of fossil fuels in the ground if we are to prevent truly catastrophic climate change.”