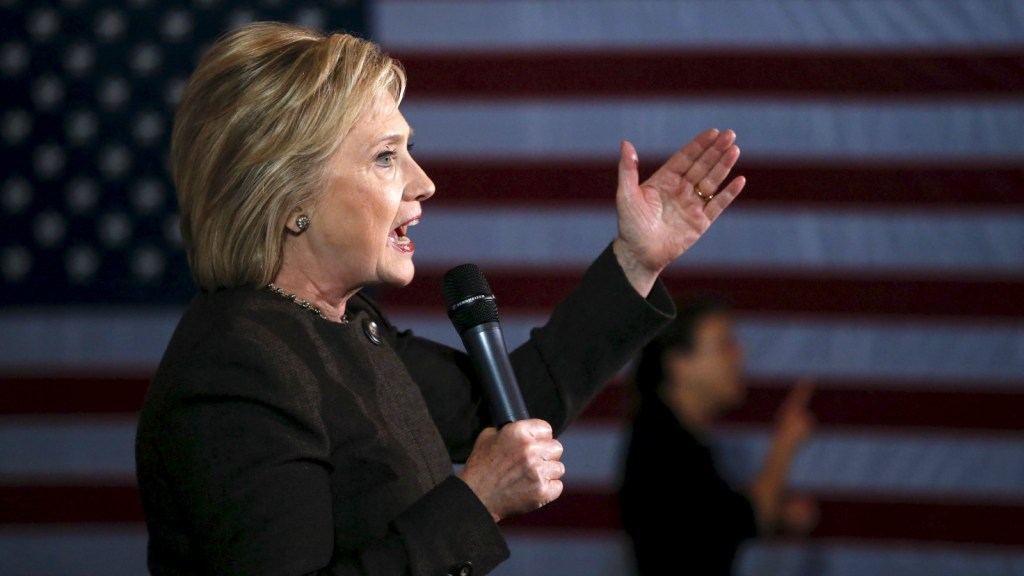 Ever since Flint’s water crisis became a national story at the beginning of the year, Hillary Clinton has done everything in her power to own the issue in the Democratic primary, to Bernie Sanders’ detriment.

She released a statement on Jan. 11 calling it “unconscionable” that the Michigan city had been using lead-contaminated tap water since 2014 while state and federal officials denied there was a problem. She went on Rachel Maddow’s MSNBC show a few days later to declare, “This is infuriating to me. … I care deeply about this issue.” She raised the issue again, unprompted, during the Democratic debate in South Carolina, saying, “I’ll tell you what, if the kids in a rich suburb of Detroit had been drinking contaminated water and being bathed in it, there would’ve been action.” Finally, she made the case for holding one of the newly added Democratic debates in Flint, and got her wish on Wednesday when the Democratic National Committee chose the location for a March 6 debate.

Why is Clinton so passionate about this issue? “Just as we have engaged in a national conversation about criminal justice reform,” her campaign chair, John Podesta, said recently, “we should also discuss the legacy of systemic racial inequalities and underinvestment that contributes to so many of the challenges communities throughout our country are facing.”

But there are two other likely reasons she’s jumped on the crisis: to shore up the African-American vote, and to bolster her general-election narrative about the need for good governance. While Bernie Sanders has spoken out on Flint, going beyond Clinton’s criticism of Michigan Governor Rick Snyder to demand he resign, he still hasn’t prioritized as much as Clinton has.

Consider their bases of support. Sanders performed well in Iowa and is expected to win New Hampshire, in part because their populations are overwhelmingly white. Sanders is nearly tied with Clinton among white voters nationally, 45 percent to 43 percent, according to a recent Washington Post-ABC News poll. Clinton, meanwhile, trounces Sanders in African-American support: 86 percent of African-Americans view Clinton favorably, versus 43 percent for Sanders. More than half of the Democratic electorate in the next primary, South Carolina, is black. No wonder Clinton leads Sanders in the state by more than 30 points.

Clinton needs that firewall of African-Americans voters if she’s going to fend off Sanders’ surge. A clean water campaign — one that elevates the inequities that make African-Americans twice as likely to rely on substandard plumbing as non-Hispanic whites — helps her do that. But her clean water campaign isn’t just a narrow primary tactic to edge out Sanders. Flint is also a prime example of what happens when the government, on all levels, fails to do its job.

Unlike climate change, polluted drinking water is a simple issue Americans can readily understand — and one that tops Americans’ concerns about the environment. Fifty-five percent say they worry a “great deal” about it, per a 2015 Gallup poll, while less than a majority worry a great deal about other environmental threats.

They’re right to worry, as poor infrastructure investment, patchy oversight, and cost-cutting are rampant in communities across America. To save money, Michigan officials switched from purchasing water from Lake Huron via Detroit to sourcing water from the Flint River, but failed to treat the water properly, causing corrosion of Flint’s lead pipes. Compounding the problems, state officials and federal regulators denied there was a problem until last fall, when it was too late.

For Clinton, Flint is an opportunity to convince voters that good government can and should address top problems like economic and social inequality — and it’s a case study for how Republicans’ zeal for austerity hurts the most vulnerable Americans. Clinton only has to point to any of her nine GOP opponents’ plans for handicapping the Environmental Protection Agency to show how a Republican presidency is dangerous to public health (it also helps her case that Snyder is a Republican).

Republican presidential candidates have done their best to avoid a thorough examination of what went wrong in Flint, perhaps because it would undermine their arguments for less federal oversight and investment. But whoever wins the GOP nomination will have to formulate a response eventually, because Clinton has hinted at how she’ll connect Flint to her presidential platform.

“Environmental justice can’t just be a slogan — it has to be a central goal,” she wrote in an op-ed last weekend for MSNBC. “Cities are full of lead paint in low-income housing, lead embedded in the very soil from the days of leaded gasoline. Already, African-American children are twice as likely to suffer from asthma as white children — and climate change will put vulnerable populations at even greater risk.”