Houston teen: Why my oil-soaked city could be ground zero for a greener future 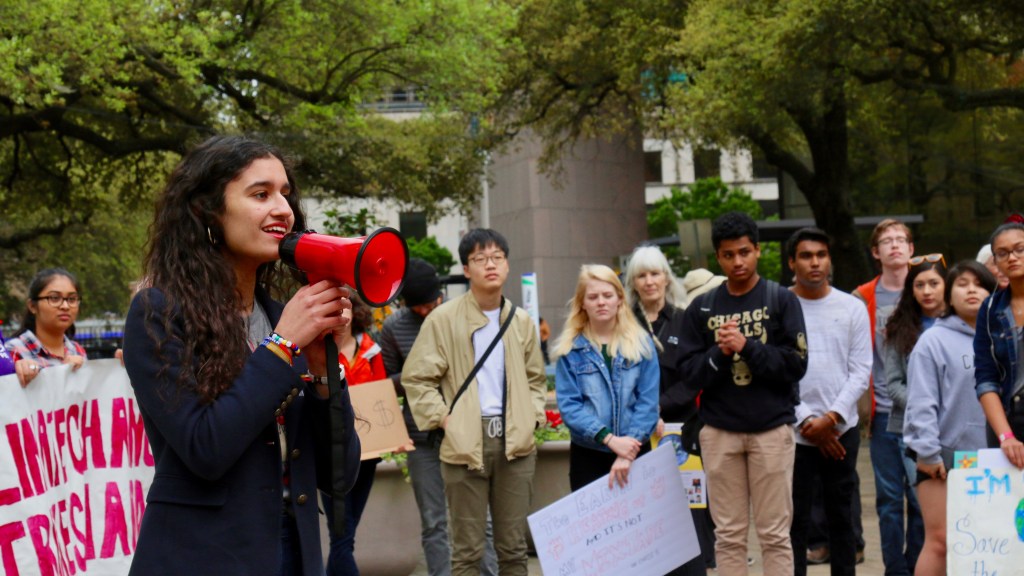 Houston teen: Why my oil-soaked city could be ground zero for a greener future

Shania Hurtado is a student and organizer from Houston, Texas. A proud Latina, she advocates for the environment, women’s rights, and immigrant rights.

On March 15, I organized the Youth Climate Rally in Houston, Texas, which brought 50 students to City Hall to demand legislative action to mitigate the effects of climate change, vowing to protect the integrity of our futures and planet. It was empowering to join a global movement and raise my voice in a new space that young people are claiming as our own. We came as individuals and left as a community ready for change.

Two days later, a petrochemical facility owned by Intercontinental Terminals Company burst into flames in southeast Houston, sending clouds of toxic smoke into the air. Schools in the area were closed for three days, hindering education for thousands of students.

Less than a month later, President Donald Trump visited Houston and signed an executive order making it easier for oil and gas companies to construct pipelines. Not long after that, ExxonMobil announced it was investing $2 billion in the expansion of a chemical complex in Baytown, east of Houston. Texas Senator John Cornyn celebrated the announcement on Twitter, calling it “huge news” for the state. The same day, the Trump administration moved to alleviate safety regulations that were enacted after the BP Deepwater Horizon oil spill.

Instead of taking action to place the people first, Senator Cornyn and President Trump fueled an industry that actively degrades public health. Thousands of Texans live adjacent to oil and gas facilities and are more likely to contract cardiovascular disease, lung cancer, asthma, child cancer, and other health effects, than those who live elsewhere. Lower-income communities are harmed disproportionately.

The devastating fire, and the events that followed, served as a stark reminder of the weight the oil and gas industry holds in this city as an active threat to Houston residents and the environment. But I remembered that feeling at City Hall in March, and the community of young people, unafraid to project their voices and passion for change. I resolved to work harder and fight for a better Houston and a better world.

As a first-generation Venezuelan-American, raised in two worlds heavily dependent on petroleum, I have come to understand the gravity of the oil and gas industry. In Venezuela, petroleum was 98 percent of exports. When the global oil market crashed in 2014, Venezuela’s GDP plummeted. It continued to fall amid the crippling state of democracy and the economy.

But I know there is a brighter future in store for Texas, especially with the potential it carries for renewable energy. Texas already leads the United States in wind energy. A transition to renewables such as solar and wind will aid Texas in finding its way out of dependency on the oil and gas industry. There is opportunity for growth in the economy, jobs, and a means to preserve our planet and the future of our students.

It’s high time we took action. Hurricane Harvey in 2017 caused massive flooding in Houston, and horrible contamination of our water and air. Just this month, school was cancelled due to severe thunderstorms and flooding. Houston’s climate worsens as we approach summer and hurricane season.

But I know that today’s students are the leaders that will initiate waves of change. The future is dependent on what we do now.

I envision a future where the youth are at the forefront, leading the city and state toward reaching their full potential. A future with solar-powered public transportation, and schools powered by energy from wind turbines in West Texas. A future where we learn about the oil and gas industry as the history of our state, not the present. A future where we value the voices of every individual and act without hesitation.

That may seem beyond reach, coming from the center of the U.S. petroleum industry. But Houston is the most ethnically diverse city in the country. There is a multitude of perspectives in this city that cannot be found anywhere else. These diverse voices can find intricate solutions to complex problems. This is our power.

A renewable future is possible. Let’s change the narrative.