How California can make its cap-and-trade program more equitable 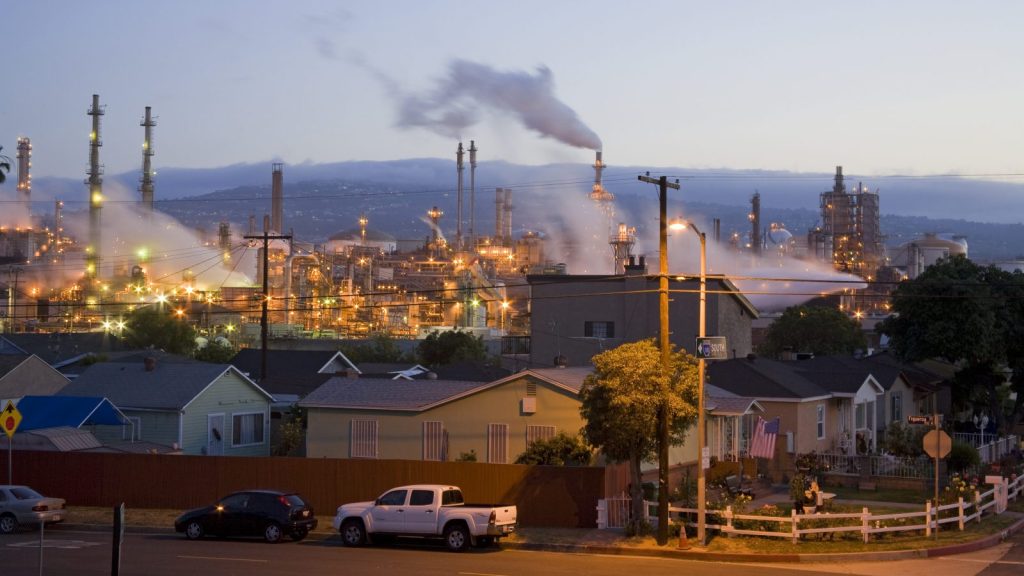 How California can make its cap-and-trade program more equitable

Last week California celebrated a big milestone: The state announced it had succeeded in bringing down its carbon emissions to levels it hasn’t seen since the 1990s. And the Golden State managed to hit that benchmark four years earlier than it had set out to, all while laying to rest the tired old argument that an economy can’t grow while emissions shrink.

There is, however, a catch: Carbon emissions may have dropped statewide, but according to a study published in the journal PLOS Medicine, low-income and communities of color that border heavy industry are seeing greater amounts of greenhouse gases and other airborne pollutants. Further, the analysis validates criticism against one of the state’s most celebrated climate interventions: its cap-and-trade program.

Historically, proposed climate solutions have focused on addressing aggregate carbon dioxide numbers while ignoring localized impacts, says Amy Vanderwarker, senior policy strategist at the California Environmental Justice Alliance. And communities in closest proximity to greenhouse gas emitters have long argued that cap-and-trade has concentrated airborne contaminants on those who are most vulnerable to pollution.

“In many ways we have thought of the work that these research partners are doing as the ‘I Told You So Report,’” Vanderwarker says. “It’s academic and data-driven verification of the lived reality and experience and knowledge and wisdom of low-income communities of color across the state.”

Through its cap-and-trade program, California sets a “cap” for the total amount of carbon that can be emitted by certain companies operating within the state. Companies can purchase or “trade” emission allowances with each other, allowing bigger polluters to essentially purchase the right to emit from state auctions or from other companies that aren’t sending out as much carbon and have allowances to sell. The danger of this system is that the companies that end up purchasing those allowances — and thus polluting more — tend to be located in “fence-line” communities, which are typically lower-income and inhabited predominantly by people of color.

The report shows a correlation between greenhouse gas emissions and the presence of other harmful pollutants, like particulate matter and volatile organic compounds, that have been linked to cancer, respiratory problems, and other health issues. (Grist board member Rachel Morello-Frosch is a study co-author.) Put simply, facilities are usually emitting more than just carbon: so when greenhouse emissions go up, so does the amount of other bad stuff in the air.

The new research confirms that facilities regulated by California’s cap-and-trade program are disproportionately located in “fence-line” communities: Neighborhoods within 2.5 miles of regulated facilities on average had a 34 percent higher proportion of residents of color and a 23 percent higher proportion of residents living in poverty than areas beyond that boundary. And more than half of these polluters actually increased the amount of greenhouse gases they released since the system started in 2013. Those facilities were surrounded by neighborhoods that had higher rates of poverty and more residents of color than those surrounding facilities that cut down their emissions.

“When it comes to climate change and to greenhouse gas emissions, place does matter,” Vanderwarker says. “When you look at what’s happening on the ground, you see a different picture than what a statewide analysis and statewide numbers show.”

Clean air for all

So what is a well-meaning, climate-concerned state to do? In addition to pointing out California’s discrepancy in cap-and-trade pollution, the new study outlines potential solutions to make the program more equitable.

While cap-and-trade is designed to tackle climate change by reining in greenhouse gases statewide, it’s federal statutes, like the Clean Air Act, that regulate the quality of the air we breathe. One of the keys to improving California’s air overall, according to the study’s lead author Lara Cushing, is to quit thinking about measures designed to address climate change and those targeting air pollution separately.

“Having them harmonize those efforts instead of regulating them separately might help the state achieve both its climate and its equity goals,” Cushing says. “From a public health perspective, getting the biggest bang for your buck for the emissions reductions you’re undertaking means prioritizing emissions reductions from sources that also release a lot of health-damaging pollutants.”

Another obvious course of action is for California to significantly lower the cap and give out fewer allowances to companies. An initial glut of allowances may have made it too easy for companies to purchase additional permits to pollute.

Then there’s the issue of offsets — investments companies can buy in green projects, like forest-preservation efforts (since trees absorb carbon dioxide). Facilities regulated by the cap-and-trade program can use offsets to cancel out up to 8 percent of the emissions they’re allowed under California’s cap. The problem: A majority of these investments — 75 percent — have been made on out-of-state initiatives. Cushing’s research suggests that regulations incentivizing or requiring companies to put their money in local green projects could help alleviate the health impacts facing California’s fence-line communities.

The state is actually starting to do this: When it passed an expansion of the cap-and-trade system last year, the bill included a measure that reduces the amount of offset credits a company can purchase and requires half of those credits to go towards projects that benefit California.

The California Environmental Justice Alliance — which opposed the expansion of the cap-and-trade system approved last year — is now paying close attention to how the state moves forward with implementing the program. Vanderwarker wants trends in the amount of greenhouse gases and co-pollutants emitted in fence-line communities to be clearly tracked as part of cap-and-trade, and she argues there needs to be a plan in place to address any hot spots where air concentrations are increasing.

“We haven’t really seen any clarity on that plan from the California Air Resources Board,” she says.

What California does to address equity within its climate policies matters not only for vulnerable communities in California, but for those across the country — particularly as other places consider their own carbon-trading systems.

“California is a leader on climate change, and California can be proud of that,” Cushing says, “It’s important that we get it right and that we continue to study this program — and whether disadvantaged communities are seeing the full benefits of California’s carbon reduction efforts — so that we can continue to play that leadership role.”