Back in January, the environmental group Mighty Earth was ready to launch a massive campaign attacking Cargill, the world’s largest agribusiness, for failing to do enough to protect forests. They had composed a report labeling it “the worst company in the world.” They had sent out press releases to media organizations (including Grist, naturally) about the planned blitz. They had paid for several scathing bus ads which would proclaim Cargill’s guilt throughout its hometown of Minneapolis.

But then Cargill did the one thing that could stop the impending avalanche: It signaled it was ready to listen.

After learning about the pending campaign, Cargill asked Mighty Earth for guidance on how to make things right, and the group agreed to halt the campaign. Workers hustled to tear down the bus ads before they started rolling around the city. For six months, the two groups went back and forth in tentative peace talks.

Now, that detente has broken down in conflict.

On Thursday, Mighty Earth protesters dressed in cow costumes were ready to parade in front of Cargill’s headquarters. The organization released its report, describing Cargill as “the worst company in the world.”

“We recognize this is an audacious claim,” wrote Henry Waxman, the chairman of Mighty Earth and a former member of Congress for some 40 years. “But this report provides extensive and compelling evidence to back it up.”

The report doesn’t actually weigh Cargill against other corporations. Instead, it reads like a lawyer’s brief listing the black marks on the company’s record: sickening people with infected beef, killing fish with water pollution, buying from farmers that forced children to labor in the fields, and allegedly cheating customers with financial shenanigans.

It seemed like enviros and executives were actually making progress together for once. So why did everything go to crap? The primary reason Mighty Earth launched this attack is that Cargill failed to deliver on a sweeping promise to end deforestation by 2020, according to Glenn Hurowitz, CEO of Mighty Earth. Cargill made this commitment back in 2014 in the lead up to the United Nations climate agreement in Paris. The company’s CEO, David MacLennan, went to the United Nations to declare that Cargill would use its influence to stop forests from falling anywhere in every corner of the globe where it conducts business.

Environmental groups applauded but also promised to hold the company to its pledge. Then Cargill began to grapple with the enormity of the challenge, and executives realized that there was no way that, before 2020, they would be able to ensure that it never bought a single grain of wheat or soybean from land that was previously forest.

Meanwhile, farmers and ranchers worldwide were tearing down forests at a faster pace. Environmental groups grew increasingly frustrated with Cargill and the other corporations that had made similar pledges to curb deforestation. Last month, during a meeting of the Consumer Goods Forum, a group of some 400 companies working to end deforestation (along with many other goals), Greenpeace activists rappelled down from the rafters holding a banner that read, “still destroying forests.”

“When [Cargill] CEO MacLennan made the announcement in 2014 it was clear to me that there hadn’t been a lot of planning that when into that,” said Rolf Skar, assistant campaign director at Greenpeace USA. “I don’t mind when CEOs are ambitious and push a bold agenda, but something has definitely not worked in the years since.”

Or as Mighty Earth put it, “Cargill dropped the ball. And then they stomped on it.”

The breakdown in talks between Mighty Earth and Cargill was specifically related to soy markets in Brazil. According to Hurowitz, MacLennan agreed to support a moratorium on deforestation in the Cerrado — a region about the size of Mexico in central Brazil — and meet with other CEOs to get them to do the same. But, as the months passed, Hurowitz was frustrated by Cargill’s refusal to get tough with soy growers. The final straw came when the company told farmers it would not support the moratorium (we wrote about that here). Instead, Cargill said it would spend $30 million looking for other ways to prevent deforestation in Brazil. 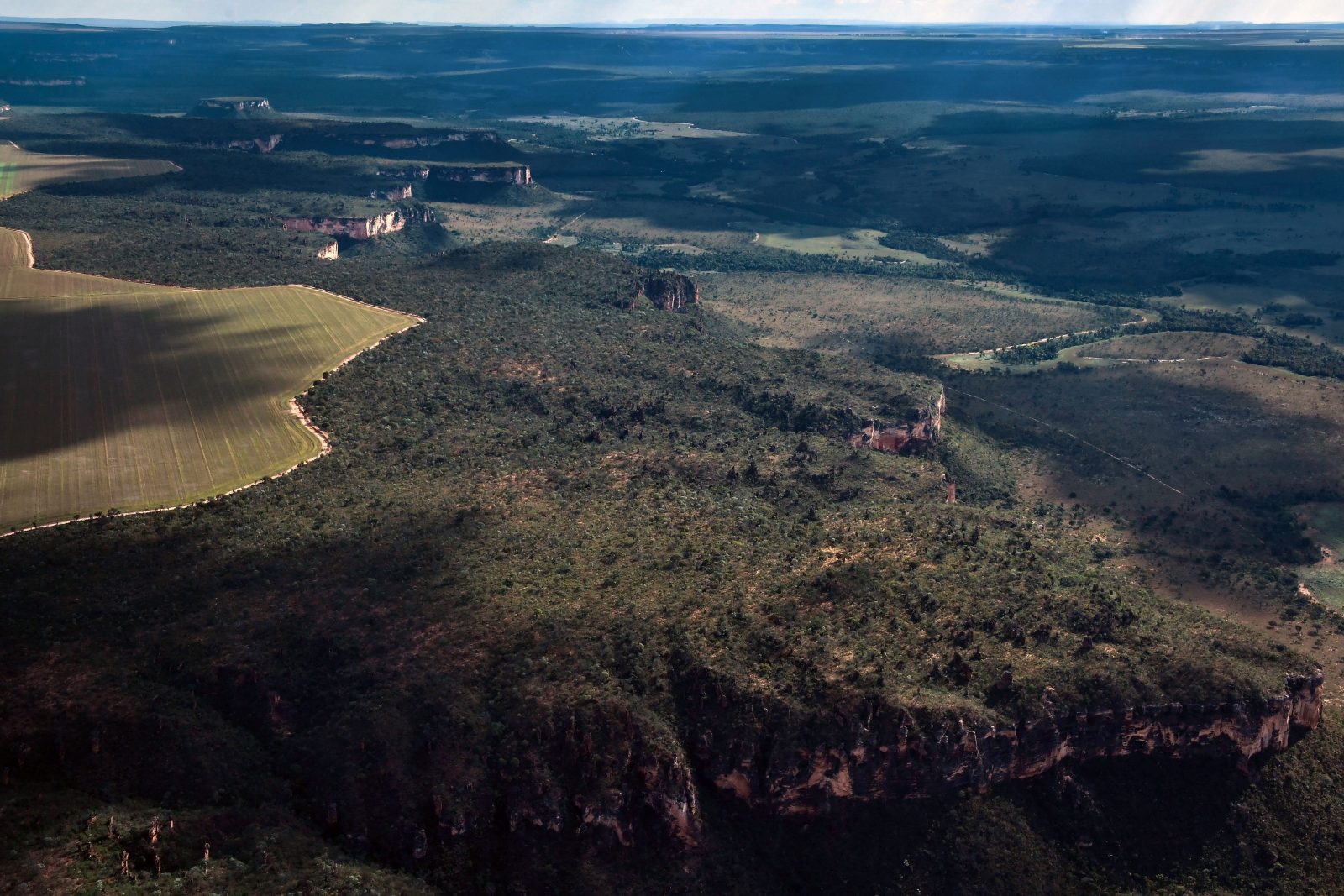 Aerial view taken on May 29, 2019 showing a farm next to a native Cerrado in Formosa do Rio Preto, western Bahia state. Photo by NELSON ALMEIDA / AFP / Getty Images

Cargill did not respond to Grist’s requests for comment. But Scott Poynton, founder of the Earthworm Foundation, thinks he has a pretty good idea of what’s going on. His organization (back then it was called The Forest Trust) was working closely with Cargill when the corporation decided to make its 2014 pledge. Though Poynton wasn’t part of those talks, he’s seen similar fights play out over deforestation commitments in Southeast Asia. In 2016, Poynton saw companies scurry when the Indonesian government threatened the palm oil corporations that were making their own rules to govern land use to stop deforestation.

“The government said, ‘Let’s be bloody clear, this is our country and we make the rules around here, so if you guys aren’t going to play by our game, you can all bugger off,’” Poynton paraphrased. (Yes, he’s Australian.) “I absolutely guarantee that such discussions have been had, in probably quite unsavory terms, between Cargill Brazil and the government of Brazil.”

It’s risky for foreign companies like Cargill to try and control land use policy in Brazil when the country’s new president, Jair Bolsonaro, supports more development of forest land. Tellingly, soy farmers in Brazil didn’t exactly react with gratitude when Cargill told them it opposed a moratorium on soy expansion in the Cerrado, on June 24. Several farmers’ associations responded by writing to the company that they had already done a great deal to protect their natural areas without Cargill’s help, and they intended to plow the land to which they were “entitled.”

“The tone has changed since Bolsonaro was elected, raising farmers expectations that they can still clear,” said Rachael Garrett, an assistant professor of Environmental Policy at ETH Zurich who has studied the conversion of land to soy fields in Brazil. Cargill understands how power has shifted, and that’s probably a major reason it decided not to support the Cerrado moratorium, she said.

In other words, the farmers know the government has their back. So Cargill has to weigh keeping its pledge against maintaining good relationships with its Brazilian producers and regulators.

“What would we expect Cargill to do?” Poynton asked. “They are walking an absolute tightrope. Does that make Cargill the most evil company in the world? No, I think it makes Cargill a company operating in a bullseye of a desperately wicked problem.”

Mighty Earth counters that one of Cargill’s corporate peers in the Brazilian soy market, the Louis Dreyfus Company, based in the Netherlands, has shown that a big company can stick to its word. Louis Dreyfus said it would stop buying soy from any farmer that destroyed native ecosystems or took land from indigenous people. “Meanwhile, Cargill has kept the bulldozers running,” Mighty Earth wrote in their report.

Statements from Cargill executives suggest that they don’t think drawing a hard line would do any good right now, because the other big grain traders, ADM and Bunge, have also refused to stop buying from farmers that plow up the Cerrado. If one of them gets tough with farmers, the soy might simply flow to another company (it’s a classic case of the prisoner’s dilemma). But environmentalists think the other companies might join the moratorium if Cargill — the biggest of them all — took the leap.