This story is part of a series on the connection between severe storms and mental health. Watch Grist’s video on Puerto Rico after Hurricane Maria, the “largest psychosocial disaster in the U.S.”

It was Daris Garnes’ 50th birthday when Hurricane Sandy barreled down on her neighborhood in Rockaway, Queens. A speech therapist with New York City’s Department of Education, Garnes had moved from Brooklyn into her new oceanside condominium five years before the storm hit. She felt like she’d accomplished a lifelong dream.

“I just felt like, wow, I’m really doing it!” she remembers thinking when she moved in.

But on the night of Oct. 29, 2012, Garnes fled her condo because of the incoming storm. She returned the next day to find it flooded and looted.

“It was really devastating to come home and see that,” Garnes says. “Everything just came crashing down on me.”

As she worked to pick up the pieces of her life, she couldn’t shake her grief. It stemmed not only from her personal losses but also from the uphill battle her adopted neighborhood faced in recovering from the devastation.

When it hit New York City in October 2012, Hurricane Sandy took 43 lives and cost $19 billion in damages. It also left 2 million people without power. In Rockaway — which was one of the hardest-hit areas — the outages lasted for weeks. 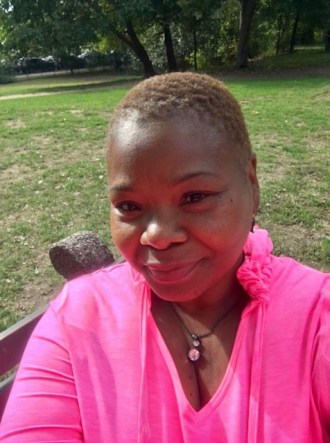 Garnes counted herself lucky. She had a good job in a Brooklyn neighborhood that was largely spared by the storm. Her commute to work felt like a journey to another world. When her office held its Thanksgiving dinner, she saw the spread of food and burst into tears.

“It was very hard for me to watch people in Brooklyn move about as if everything was normal when I knew everyone was suffering in the Rockaways,” she recalls.

A counselor eventually told Garnes that what she was experiencing was survivor guilt — a response to a traumatic experience common among combat veterans and those who live through mass shootings and natural disasters.

After suffering through one of the worst hurricane seasons in history — with hurricanes Harvey, Irma, and Maria all pummeling parts of the U.S. this year — the country’s coastal cities and territories are filling up with survivors. Since Maria made landfall in Puerto Rico, officials say the number of suicides on the island has increased, and calls to the health department’s emergency hotline for psychiatric crises have doubled. A study conducted by the Kaiser Family Foundation found that nearly 1 in 5 Texas residents affected by Hurricane Harvey say their mental health has deteriorated since the deluge. And these effects are likely to linger, as the experiences of communities that weathered past storms, like Hurricane Sandy and Hurricane Katrina, suggest.

Five years after Sandy hit, the rate of adult psychiatric hospitalizations on the Rockaway Peninsula is nearly double that of New York City as a whole. To address the ongoing crisis, the city’s health department is working with a local community group to connect residents with preventative care and fill in the gaps in neighborhoods where a warming climate is likely to bring more Sandy-like storms and strain limited public health resources.

“Even though I love it here — it’s a beautiful place — I do have anxiety every now and then about future storms,” Garnes says.

She has every reason to worry. A report released earlier this year by Climate Central ranked New York as the American city most vulnerable to major coastal flooding and sea-level rise, with 245,000 residents at risk. Researchers expect that by 2030, Sandy-like storms are likely to take place every five years.

“If you dodge one season, you just don’t know what will happen next time,” Garnes says.

Garnes was just one of many Rockaway residents who suffered from the psychological toll of living through Sandy. A study conducted by Shao Lin, a professor at the University at Albany School of Public Health, found an increase in emergency department visits for anxiety and mood disorders immediately after the storm. A majority of mental health–related emergency visits involved substance abuse — and during the blackout caused by Sandy, such incidences went up fourfold.

“Sandy was a very traumatic experience,” says Ana Fisyak, deputy director for planning and development with the Rockaway Waterfront Alliance, an organization focused on building the peninsula into an environmentally resilient community. “People are still not back in their homes. A lot of people are still dealing with that.”

Recovery from Sandy has been markedly slow, and that’s one factor that could be responsible for the longer-term mental-health effects on the Rockaways (as New Yorkers refer to the more than a dozen different neighborhoods on the peninsula). On the fifth anniversary of the hurricane, nearly a thousand families were still waiting for the city to complete the repairs promised as part of its Build It Back program for homeowners. Of 33 public housing developments damaged by Sandy, only one is fully repaired and upgraded. Progress has been the slowest in Rockaway’s lower-income neighborhoods, where repairs to two of its five major public housing developments are still in the design phase.

Watch Grist’s video on Puerto Rico after Hurricane Maria and the connection between big storms and mental health.

Victoria Roomet, a behavioral health clinician who lives and works in the Rockaways, says she’s noticed that residents who are still waiting on rebuilding efforts are left with little recourse.

“I think it’s something that maybe Rockaway residents in a really unfortunate way are kind of used to — the lack of response and attention and services,” she says. “I definitely think it has some impact on people — on whether they’re able to feel hopeful.”

Roomet says even distant natural disasters — including this year’s bumper crop of superstorms — weigh on the minds of some of her patients. “They’ll feel a surge of anxiety,” she says. “They’re reminded of the tragedy that happened then.”

After Hurricane Maria pummeled Puerto Rico, Daris Garnes says she couldn’t sleep — in part because a friend had recently moved to the island. But the storm and the wreckage it caused dredged up memories.

“Before Sandy, I would hear about hurricanes in other places and I didn’t feel the pain that I feel now,” she says. “I’ve gone through it, to be without lights and without food.”

As a narrow peninsula that’s less than a mile wide for most of its 11-mile stretch, Rockaway is extremely vulnerable to storms, sea-level rise, and frequent flooding. “As we speak, the street is flooded,” Fisyak from Rockaway Waterfront Alliance tells me when we first chat in early November.

Parts of Rockaway are among the poorest neighborhoods in New York City. Away from the peninsula’s popular beaches and affluent oceanfront enclaves clustered on the western end, 1 in 3 children in the eastern Rockaway’s largely black and Latino neighborhoods live below the poverty line. Nearly 1 in 10 residents live in public housing, the result of decades of strategic efforts to develop massive housing projects where the city could buy cheap land. Its poorest residents have wound up living in the areas more vulnerable to floods and storms.

Because Rockaway is geographically isolated, residents regularly commute up to two hours to reach jobs and health care. Much of the peninsula is also considered a food desert, and the lack of access to fresh, healthy fare has led to a heart disease–related death rate that’s nearly 60 percent higher than the rest of New York City.

“Forces like structural racism and intergenerational poverty contribute more to the health of people in communities than any individual behavior can,” says Patrick Germain, executive director of policy and planning and strategic data use at the New York City Department of Health and Mental Hygiene. 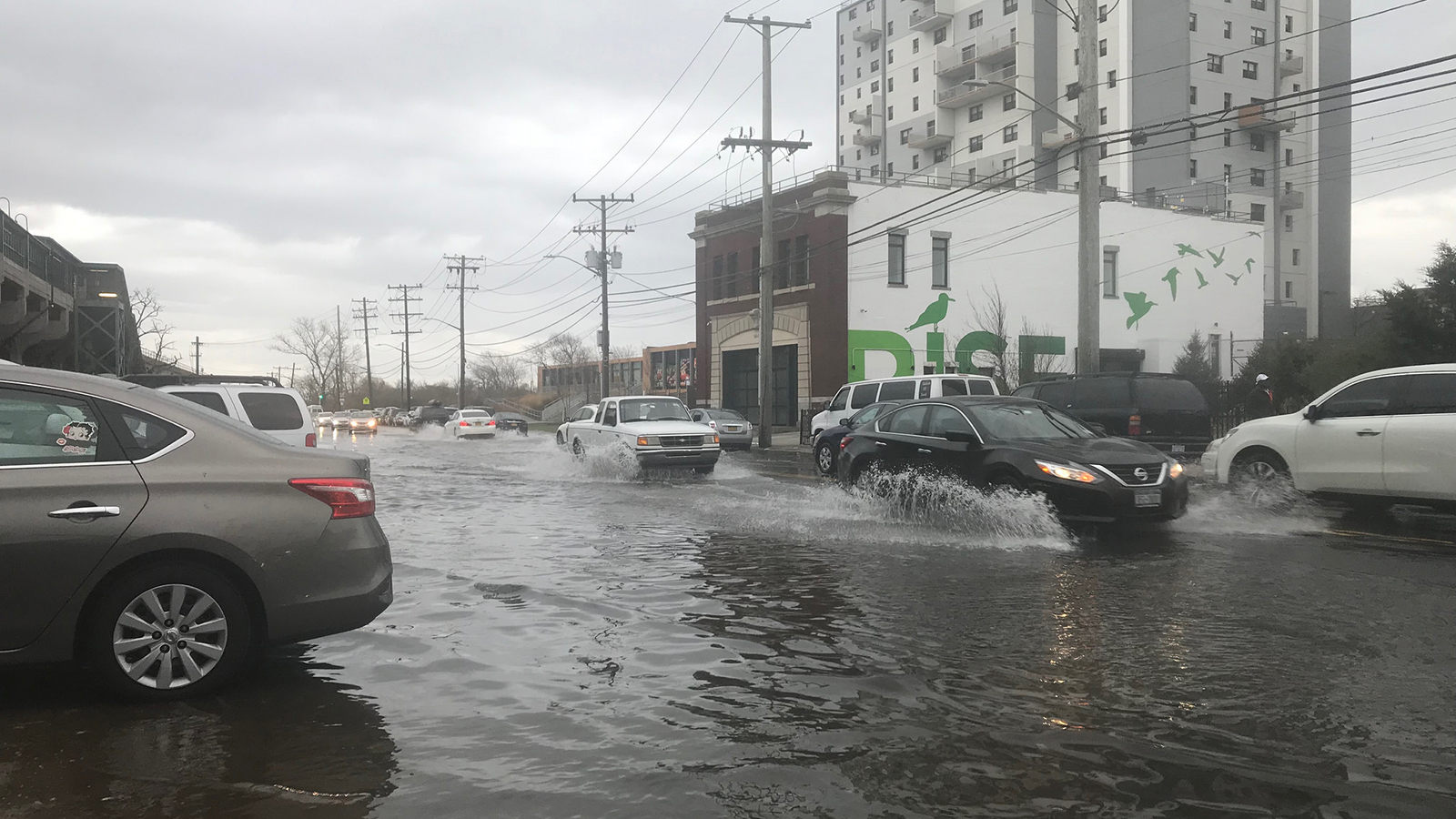 Germain says that to address the underlying causes of health crises — like the rise in mental health–related hospitalizations in Rockaway — the city has to work with community groups that understand the problems neighborhoods are grappling with.

As a partner for the New York City health department’s Take Care New York health and equity initiative launched last year, Rockaway Waterfront Alliance organized two meetings with more than 100 community members to identify a major public health need in the eastern part of the peninsula and come up with a plan to address it. Once participants were shown data on Rockaway’s disproportionately high rate of psychiatric hospitalizations, the choice became clear: They decided to combat the stigma around mental health care that prevents community members from seeking help.

“People aren’t getting help before they reach crisis,” says Alexa Liguori, a research coordinator who was hired to lead the Rockaway Waterfront Alliance’s mental health work. “They’re getting to a crisis point where there is no other option but to go to a hospital.”

To give Rockaway residents options to avert an emergency-room trip, the alliance is developing a guide to signing up for health care and accessing preventative treatment. In May, the group is holding a 5k run by mental health care providers in the hopes that participants will discover the resources available to them.

Months before Sandy tore through, one of the peninsula’s two major medical centers closed. So at the same time that the community experienced a surge in demand for mental health services and drug-rehabilitation programs, one of its larger providers had disappeared. To fill the gap, Rockaway Waterfront Alliance is working to recruit peer counselors and place them in local emergency rooms.

Andriana LaMendola is a high school senior who attends Rockaway Waterfront Alliance’s after-school programs. She remembers watching waves crashing down from both sides of the peninsula during the night of the storm.

“In the moment, I was very overwhelmed and felt helpless, because there’s really nothing you can do to stop the water,” she says. 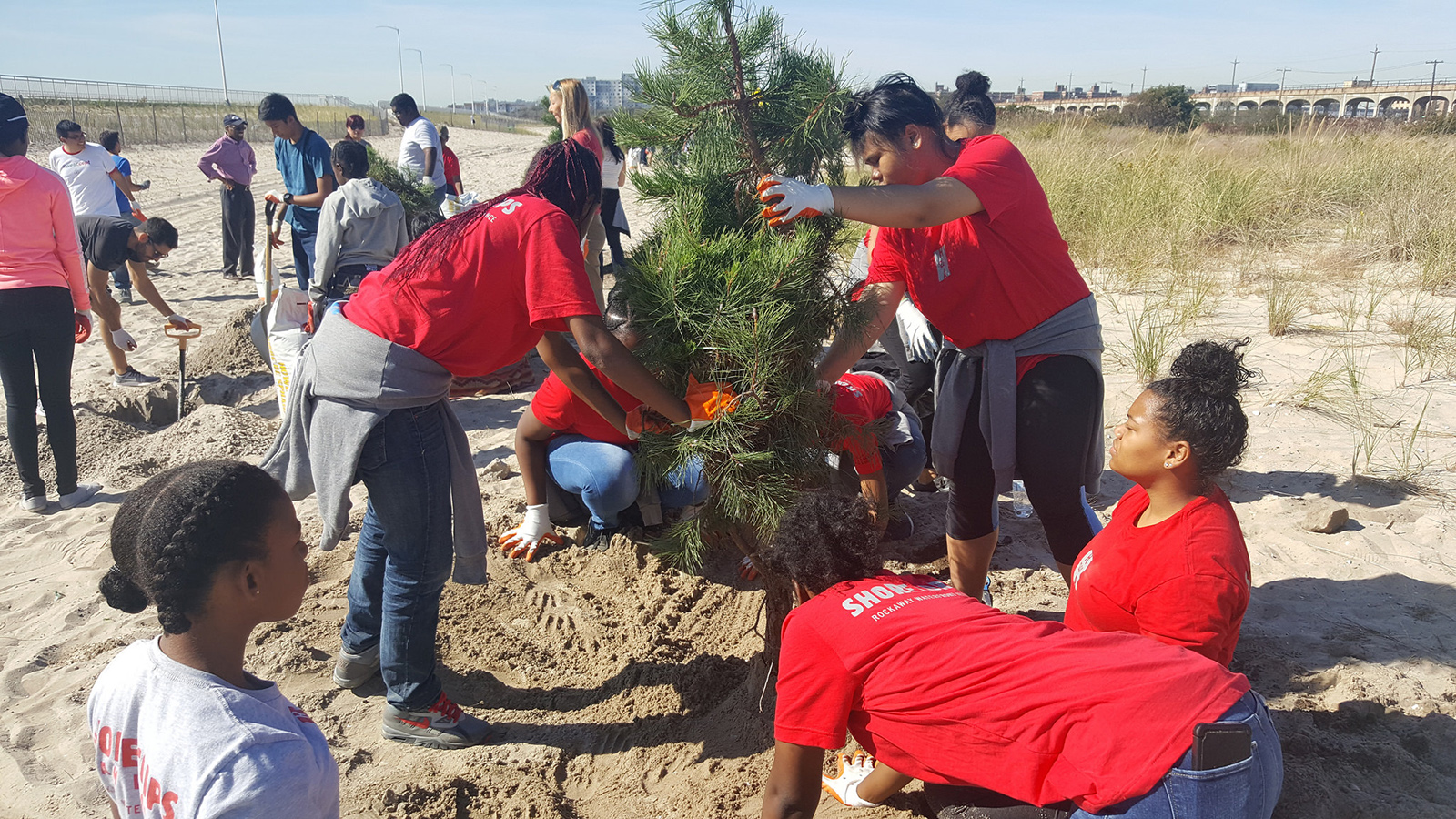 But through the alliance, LaMendola has helped with dune plantings that could one day make a difference. Planting trees and beach grass creates a protective buffer that makes the shore more resilient to other storms. It also helps her feel safer and more hopeful for the future.

Daris Garnes is also active in the Rockaway Waterfront Alliance’s community. Five years after losing everything to Hurricane Sandy, she has found solace in simple activities like gardening, walking along the shore, and watching the sunset.

And she’s become a strong believer in reaching out to get mental health care.

“I was trying to be strong for everybody else,” Garnes says about the days immediately after her beachfront condo flooded. But she would soon come to realize that talking to a counselor helped her from keeping all her feelings bottled up.

“Being a survivor made me a stronger person,” she explains. “It made me reach out to others when I needed help.”