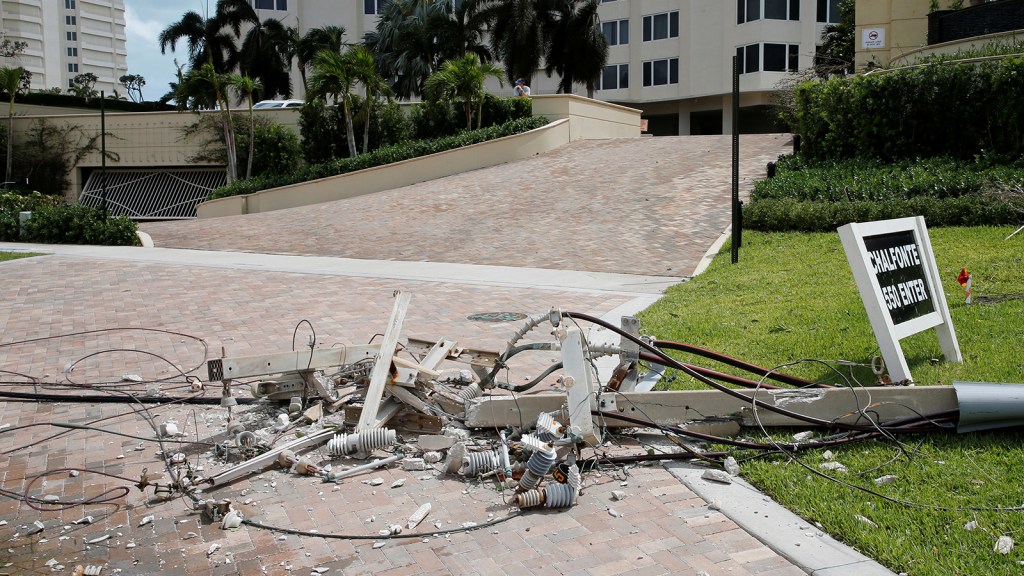 When Hurricane Irma scraped its way up the Florida peninsula, it left the state’s electrical grid in pieces. Between 7 million and 10 million people lost power during the storm — as much as half of the state — and some vulnerable residents lost their lives in the sweltering days that followed. Meanwhile, tens of thousands of electrical workers from around the country rushed to the Sunshine State to repair damaged substations, utility poles, and transmission lines.

But in Palm Coast, on Florida’s eastern seaboard, midway between Daytona and St. Augustine, Jim Walden never lost power. As he and his wife listened to debris clattering off their roof, 24 solar panels and 10 kilowatt hours of battery storage kept their lights on and their refrigerator cool. Over the ensuing days, as electric utilities struggled to return power to Florida’s storm-wracked communities, the only thing Walden and his wife missed was their air conditioner (which would have drained their batteries too quickly).

“It worked flawlessly,” Walden says of his solar-plus-storage system. “We had plenty of power for the fans to keep us cool and the lights when you walk into the bathroom at night. The wife would even run her hairdryer off of it.”

Walden’s setup — which draws power from the sun during the day and dispenses it at night, with or without the help of the grid — is an illustration of how we might reimagine our electrical system to be more modular, resilient, and renewable-powered. We’ve already been struggling with the question of how to build (or rebuild) our grids to better accommodate solar- and wind-generated energy. But this month’s run of record-making Atlantic hurricanes has made finding an answer — one that will help us better weather the storms of the coming century — even more urgent.

Questions about reliability have dogged renewable energy from the beginning. Simply put, when the sun isn’t shining and the wind isn’t blowing, you’re not getting any energy from those sources. Our grid, by contrast, is set up to provide constant, unwavering power around the clock. We’re only just starting to address the challenge of reconciling these two basic facts in one functional system. (Hint: The solution involves batteries). But according to a Department of Energy report, wind and solar power have not made the U.S. power grid less reliable, even as the amount of renewable energy loaded onto it has shot up.

But the grid is getting less reliable overall. Thanks to perpetual delays in updating old infrastructure, the United States sees more power outages per year than any other developed country — costing an annual $150 billion in lost productivity.

And it’s likely to get worse before it gets better. Even as Florida’s lights turn back on, the Atlantic keeps serving up hurricanes like Maria, which left all of Puerto Rico in darkness that could last as long as six months. Overall, the average number of annual weather-related power outages doubled from 2003 to 2012, a Climate Central report found.

One basic improvement the United States could make to its power grid is moving power lines from above-ground utility poles to protected underground conduits. This is how Germany rebuilt its grid after World War II, and now it suffers very few outages, says Blake Richetta, the U.S. VP for German clean-energy company sonnen. The country has fewer than 12 minutes of blackout per customer per year, compared to the 244 minutes that plague Americans.

But moving America’s 300,000 miles of transmission lines underground would be an epic investment of time and labor — just the sort of massive infrastructure project we’ve been putting off.

Florida utilities did invest in some storm-hardening of their power infrastructure in the past decade, replacing wooden poles with concrete ones and placing them closer together as a response to hurricane damage in 2004 and 2005. The state’s largest investor-owned utility, Florida Power & Light, spent $3 billion on improvements over the last decade, including an $800-million smart-grid project completed in 2013 with backing from the Department of Energy. The initiative involved deploying more than 4.5 million smart meters, sensors, and flood monitors, all networked together to give the utility real-time information on how power is moving around the grid.

Those moves helped lessen the damage Irma caused, according to Florida Power & Light CEO Eric Silagy. During the hurricane, several power substations were able to shut down when flooding monitors indicated equipment was at risk, saving the utility several days of work and possibly millions in equipment repair.

Still, Silagy’s company had to deploy around 20,000 workers in camps across the state to patch power plants and transmission lines in the days after the storm. And a utility spokesperson told ABC News that parts of the electrical grid on Florida’s west coast will require a “wholesale rebuild.”

“This is going to be a very, very lengthy restoration, arguably the longest and most complex in U.S. history,” VP of Communication Rob Gould said.

Clearly, Florida — and the rest of the country — still needs to do much more. And according to Jim Walden, it’s going to require a change in attitude for many Americans.

“It’s amazing to me that we live in the Sunshine State, and it’s hard to get people interested in solar power whatsoever,” he explains.

Walden himself got interested because he wanted to save money on his electric bill. Later, with the help of a $7,500 federal tax incentive, he installed his own battery storage to become more self-sufficient, especially during power outages.

The solutions to our collective energy troubles, however, will also need to be collective. One way that could look is scaling up from individual battery-powered homes to networked storage hubs that could act as regional power sources, flexibly responding to the changing demands of the grid.

As one urban resilience expert, Thaddeus Miller, told ProPublica, increasing the defenses of our cities and systems will require deeper changes than any we’ve embraced so far. “Fundamentally, we must abandon the idea that there is a specific standard to which we can control nature,” he said.

That means, for instance, changing the way we think about resilient infrastructure. Rather than working to prevent flooding at all times with high-investment levees and reservoirs, we could work to build facilities that are better at weathering flooding without being totally compromised. These “safe-to-fail” approaches would leave less of a mess after a storm blows through.

Because storms are going to blow through places like Florida, and they’re likely going to get stronger.

“We lose electricity quite often here, believe it or not — there are thunderstorms that can come up and knock power out,” Walden says. “Just to have electricity during those times is a great comfort.”