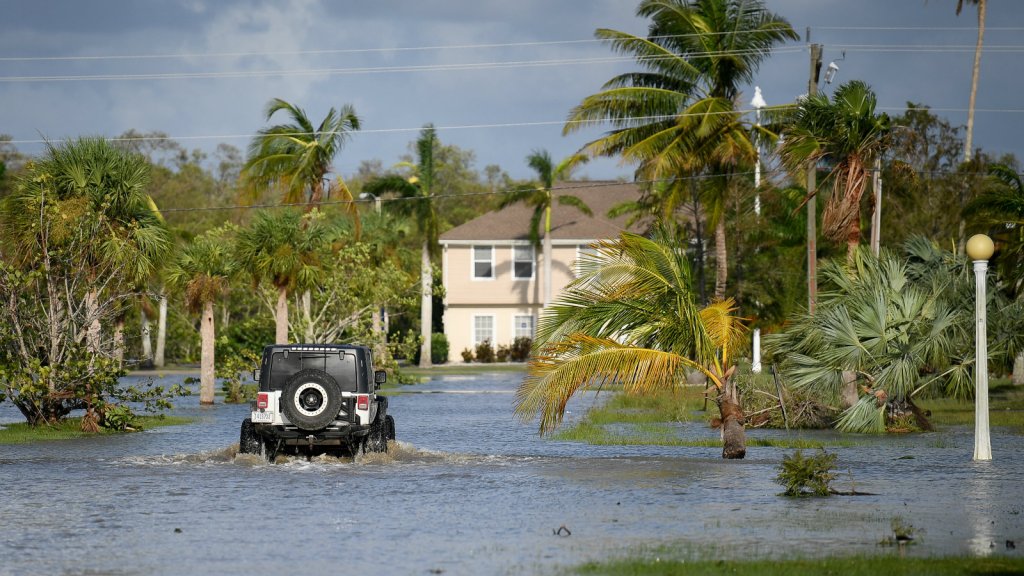 The highest point in all of Florida is a hill that tops out at 345 feet above sea level, just south of the Alabama border. Much of the rest of the state lies far, far below that — like, 340 feet below — a peninsula jutting into the Caribbean around the same height as the Caribbean. It’s the last place you’d pick to ride out a hurricane, given the choice.

But that’s the choice Florida’s 20 million residents had to reckon with last week, as Hurricane Irma barrelled toward the state, breaking records and flattening towns across the Caribbean. Many expected it to be the costliest disaster in U.S. history — not just because of the Irma’s towering strength.

Florida is seemingly made for disaster. Its sprawling cities have been built up quickly and extensively, at the expense of the ecosystems that act as a natural defense against the worst of a hurricane’s blow. There’s nothing to stop a hurricane like Irma from wreaking havoc wherever it goes, but dunes, wetlands, mangroves, and coral reefs can all play an important role in absorbing some of the destructive energy of a storm. Unfortunately, over the past century, the Sunshine State has lost the majority of all these natural shock absorbers, trading them for arable land and new developments.

As Florida and Texas start to rebuild from the blows dealt by Irma and Harvey, many are weighing how best to fortify vulnerable coastal cities, even as rising sea level brings the threat of flooding closer and closer.

“If you live near the water, the difference between a crashing wave and a slowly moving chop against the walls of your home can be everything,” says Rob Nowicki, a post-doctoral researcher at Florida’s Mote Marine Lab.

Houston’s mayor made a plea for funding to construct a massive sea wall, or “coastal spine,” to protect the region from dangerous storm surges in the future. “We cannot talk about rebuilding” he said, “if we do not build the coastal spine.”

This bunker-building approach to natural disaster — which Nathanael Johnson wrote about in Houston’s struggle to control floodwater — is prone to occasional, catastrophic failure, especially as climate change continues to shift the baseline on our expectations of what a storm can do. The problem is, for Florida, these kinds of concrete-heavy projects aren’t really an option.

“What distinguishes all of South Florida is that it’s got this porous limestone base,” says Ashley Dawson, author of Extreme Cities. No matter what barriers you put between yourself and the sea, water will be able to seep around it. In Miami Beach, king tides regularly flood up through the city’s storm drains, hurricane or no. At the most dire moments before Irma made landfall, Miami — with an average elevation of 6 feet above sea level — was predicted to see as much as 10 feet of storm surge.

When Irma made a last minute swerve inland, pushing the storm surge away from populated coastal cities, much of the predicted damage was avoided. Still, Miami and Jacksonville saw several feet of flooding, power outages, and overwhelmed infrastructure.

Other cities, like Tampa and Sarasota, remain especially vulnerable because they sit on the on the edge of very shallow seas, Dawson says. That means when storms sweep in from deeper ocean they pile up some extremely high, extremely powerful waves ahead of them. Although Tampa only ended up with a couple of feet of storm surge from Irma, initial forecasts were chilling; if the storm had veered a different way, nine to 15 feet of surge might have slammed into the city.

Shoreline habitats like dunes and wetlands can block storm surge, usually the deadliest part of a major hurricane, because they slow down dangerous waves and prevent water from moving as far inland as it would without them.

A recent study in Nature’s online journal calculated that wetlands saved New York $625 million in flooding damage during Hurricane Sandy in 2012, by absorbing both storm surge and rain.

“As a rule of thumb, you can expect larger and more prominent ecosystems to provide more protection,” says Nowicki.

The same swamps and mangroves that would help protect Florida from storms are also what helped keep people and development out of the sparsely populated state until the 20th century.

To make South Florida habitable, the Army Corps of Engineers dug 2,000 miles of canals and levees starting in the 1930s. Beaches were bulwarked, channels were dredged, subdivisions snaked their way into former marshland, and Disney World appeared in a puff of pink smoke (I assume). Along the way, Florida’s natural wetlands receded and its once-stunning coral reefs all but disappeared. Florida is now the third most populous state, behind California and Texas.

In the last few years, Florida Governor Rick Scott has overseen large budget cuts to the department in charge of researching and preserving these ecosystems, enabling the kind of risky coastal development that puts people too close to dangerous storms. And President Donald Trump recently reversed an Obama-era mandate that federally funded construction projects abide by a higher flooding standard to take sea level rise into consideration. All of this leaves Florida in a poor position to weather future storms.

Then there’s the question of Florida’s coral reefs. Offshore reefs can’t stop surge from coming inland the way dunes and wetlands can, but they sap energy from the waves washing over them. Coral cover in the Caribbean, including in Florida, has decreased by 80 percent, leaving low-lying shorelines less protected than ever.

Mote Marine Laboratory, where Robert Nowicki works, is focused on research into how to restore Florida’s degraded reefs by growing and planting new coral colonies onto former reef sites.

“While much of our living coral is gone, the skeletons remain,” Nowicki explains. The structure of a reef, even a dead one, will continue to act as a brake on waves for a while, but over time the skeletons break down and, without live coral to rebuild them, turn into rubble.

This kind of outplanting project is based on the way foresters restore damaged forests by raising trees in nurseries and then distributing them into the wild. It’s labor-intensive and slow, yet Nowicki says it’s the best bet for rebuilding these damaged reefs, and their storm-buffering services, before they’re gone for good.

“Getting living coral back on the old skeletons,” he says, “is a kind of race against time.”