If Mike Bloomberg really cares about climate change, he won’t run for president 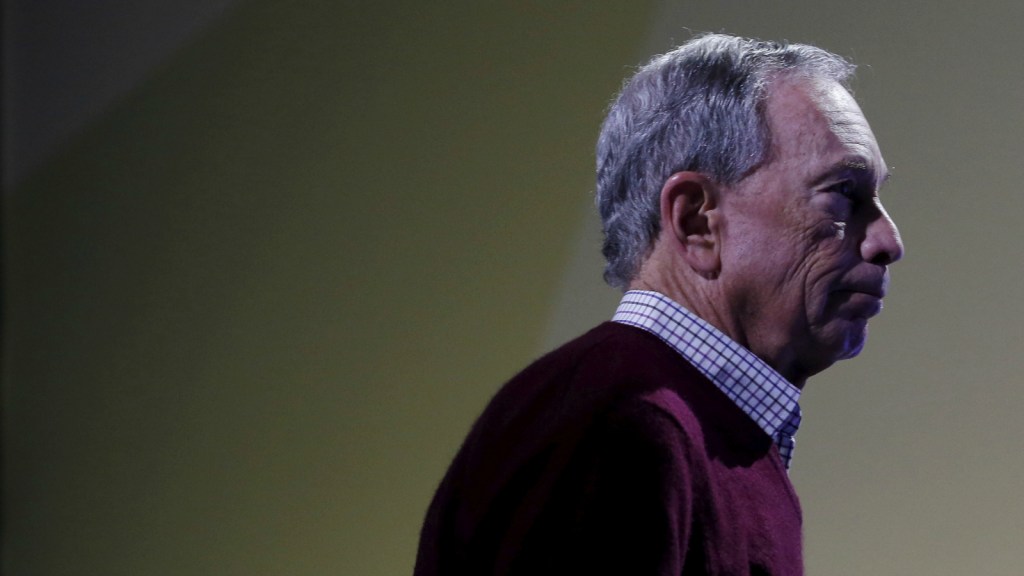 If Mike Bloomberg really cares about climate change, he won’t run for president

Former New York City Mayor Mike Bloomberg is thinking about running for president as a third-party candidate. If he does, he will destroy his own legacy and irreparably damage the causes he supposedly cares most about, such as gun control and fighting climate change.

The New York Times reported on Saturday, “Michael R. Bloomberg has instructed advisers to draw up plans for a potential independent campaign in this year’s presidential race. His advisers and associates said he was galled by Donald J. Trump’s dominance of the Republican field, and troubled by Hillary Clinton’s stumbles and the rise of Senator Bernie Sanders of Vermont on the Democratic side.”

Mike Bloomberg doesn’t seem like a stupid man. He majored in electrical engineering at Johns Hopkins and went to Harvard Business School. He made millions in equity trading at Salomon Brothers, then billions with his innovative business information company. As the mayor of New York City (he was initially elected as a Republican, then changed his identification to independent), he ran a data-driven administration that presided over lower crime, a strong economic recovery from the attacks of Sept. 11, 2001, the expansion of bike lanes and pedestrian plazas, and a comprehensive plan to mitigate New York’s carbon emissions and prepare for its future in a world of extreme weather events and rising sea levels. He used his platform as mayor of the largest U.S. city to convene the C40 Cities Climate Leadership Group. He now serves as the U.N.’s Special Envoy for Cities and Climate Change. Through his charitable and political donations he has promoted gun control and climate action. In 2012, after witnessing the terrible toll of Hurricane Sandy on New York, he endorsed President Obama for reelection in an editorial titled, “A Vote for a President to Lead on Climate Change.”

Bloomberg has personal, political, and policy flaws. He is imperious and elitist. He has been accused of sexual harassment. His mayoral record on disability rights and services was lousy. On addressing economic inequality, he didn’t so much have a record as the absence of one. He trampled the civil liberties of protesters, and the civil rights of black and Latino men subjected to aggressive policing. But these deficiencies suggest that he lacks compassion, not intelligence or rationality.

Yet here he is contemplating a campaign that would reportedly cost him a billion dollars of his own money and would lead to nothing but electing a Republican who opposes the very causes that Bloomberg has devoted himself to — especially climate action.

Simply put, like every third-party candidate who has run in an American winner-take-all presidential election, Bloomberg would have no chance of winning and would only play a spoiler role by taking more votes from the major party candidate to whom he is most similar. That would be the Democratic candidate. Bloomberg is pro-choice, pro-gay rights, pro-”Ground Zero Mosque,” pro-environment, pro-immigration, and pro-gun control. He is unapologetically secular, cosmopolitan and empiricist. He certainly would not be drawing votes from right-wingers; they hate him. Sarah Palin, avatar of right-wing populism, opened her Conservative Political Action Committee speech in 2013 with a slam on Bloomberg for proposing to ban huge sodas in New York.

Bloomberg is said to believe that if the GOP nominates Donald Trump or Ted Cruz, that will open a space for him. It’s true that Trump or Cruz would repel some socially moderate, business-friendly Republicans. Many of those voters might cross the aisle and vote for a Democrat like Hillary Clinton, giving her a strong chance of winning — unless Bloomberg siphons them away. Essentially, Bloomberg would not appeal to the Islamophobes and xenophobes in the Republican Party, but he might appeal to the non-bigots — the ones who might be willing to vote for a Democrat.

On Monday, Politico’s Morning Money newsletter reported, “The general consensus is that Bloomberg is indeed looking at a race more closely but would likely only get in if Bernie Sanders gets the Democratic nomination and Donald Trump or Ted Cruz gets the GOP nod. There is a slight chance Bloomberg would get in even if Hillary Clinton gets the nomination if she is significantly weakened by Sanders and lurches hard to the left.” But if Clinton had to lurch leftward to win the nomination, it would not prove that the electorate is filled with unmet demand for a candidate who is like Clinton only more plutocratic. In fact, it would indicate the opposite: that our era of economic inequality has led Democratic voters to want more redistribution, not less. Likewise, a Trump nomination would prove that most Republican voters don’t support the pro-immigration, establishmentarian politics of their party’s elite. These Republican voters won’t back Bloomberg; he embodies what they will have just rejected, only more so.

So the socially conservative base of Republican voters won’t be going for Bloomberg, nor will the left wing of the Democratic Party. Mayor Stop-and-Frisk also would not do well among non-white voters. Bloomberg’s main constituency would likely be the educated white swing suburban voters who lean Democratic because of education, the environment, and social issues. Crucial regions for Democrats — such as the D.C. suburbs of Northern Virginia, the affluent liberal Cleveland suburbs like Shaker Heights, the Main Line suburbs of Philadelphia, and parts of southeast Florida that are home to ex-New Yorkers — would be divided between Bloomberg and the Democratic candidate. Meanwhile, the less educated, more socially conservative white voters who predominate in northern Florida, central Pennsylvania, and southern Ohio would still vote for the Republican nominee. So Bloomberg could cut into the Democratic vote in critical swing states and help elect a Republican to the White House.

Rich, white men like Bloomberg flatter themselves by believing that their politics are “moderate,” or mere common sense, and that their ideas are underrepresented. In fact, only around 10 percent of the electorate is up for grabs. There is no evidence that the 45 percent of voters who are reliably Democratic or the 45 percent who consistently vote Republican are crying out for a third-party candidate, much less one like Bloomberg.

Nor is it even true that Bloomberg is a moderate in the sense that he sits between the two parties. Rather, he has distinct collection of views — some of them center-right, more of them left — that he shares with a certain sliver of voters who happen to be disproportionately concentrated among donors, political consultants, and pundits. On Saturday, Politico referred to Bloomberg as, “The three-term former mayor, who governed with a middle-of-the-road philosophy of social liberalism and low-tax conservatism.” But that philosophy isn’t “middle-of-the-road”: The social part is liberal and the fiscal part is conservative.

Here’s what I wrote in the last election cycle about calls for a third-party candidate by other rich, white men, like New York Times columnist Thomas Friedman:

The views of people like Friedman and Bloomberg, who claim their perspectives are underrepresented by the two parties, are actually the only views that are consistently well represented in Washington no matter which party is in charge. Some might call it the elite consensus: pro-free trade, pro-business, hawkish, internationalist, and tough on crime. Want to see bipartisan agreement? Look at all the Democrats who, as Friedman and Bloomberg did, supported the Iraq War and are now making our foreign policy. Or look at the policies of Bill Clinton’s, George W. Bush’s, and Barack Obama’s Treasury secretaries and Federal Reserve chairs.

Many potential swing voters are working-class whites who have precisely the opposite politics of supposed centrists like Bloomberg: They are fiscally liberal and socially conservative. They support increasing Social Security benefits, raising taxes on the rich, and regulating Wall Street, but they oppose immigration and free trade deals. Many feel that their views are not represented by the mainstream candidates of either party, but that doesn’t mean they want Bloomberg — who is even further from them — instead. A Sanders-versus-Trump election wouldn’t open any space for Bloomberg with these voters. Sanders might appeal to them on economic issues and Donald Trump might appeal to their cultural resentments. Indeed, that’s part of what’s powering both of those candidates in the primaries.

But there are two issues on which Sanders and Trump are even further apart than, say, Hillary Clinton and Chris Christie: climate change and gun control. If Bloomberg runs, and helps get a Republican elected, we’ll see no progress on those issues. Does Bloomberg actually want to save the lives of those who might die in gun violence and extreme weather events? If he does, he won’t run.