There’s been a lot of consternation over oil trains recently. In the U.S. and Canada, almost two dozen crude-carrying trains have derailed in the past two years — exploding into giant balls of fire in some cases, and in others, killing people. And while the Obama administration released new oil train safety rules on May 1, they remained so lax and full of holes that some environmental groups immediately sued.

In California, as more and more crude arrives by rail, more people will find themselves within the “blast zone,” a one-mile evacuation area recommended by the U.S. Department of Transportation. As a report released Tuesday finds, California’s “blast zone” lands squarely on the shoulders of people of color. 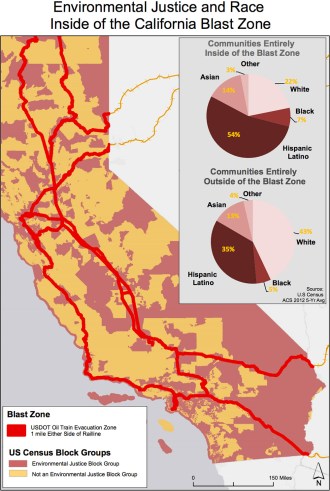 ForestEthics and Communities for a Better Environment 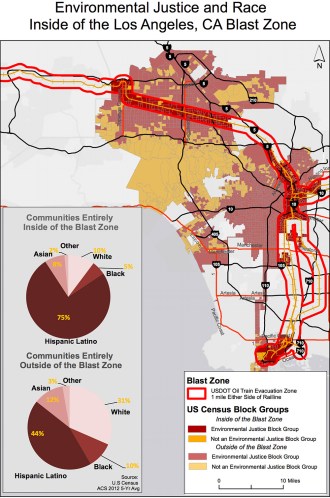 ForestEthics and Communities for a Better Environment

This is the first report of its kind to so explicitly link race to the oil train debate. It also makes lofty recommendations that any oil train activist can get behind, such as an immediate moratorium on all oil-by-rail imports in California and “immediate action to root out systemic and institutional environmental discrimination and racism.” Hear, hear.