In the Green New Deal era, everyone has a climate 'plan' (even the right) 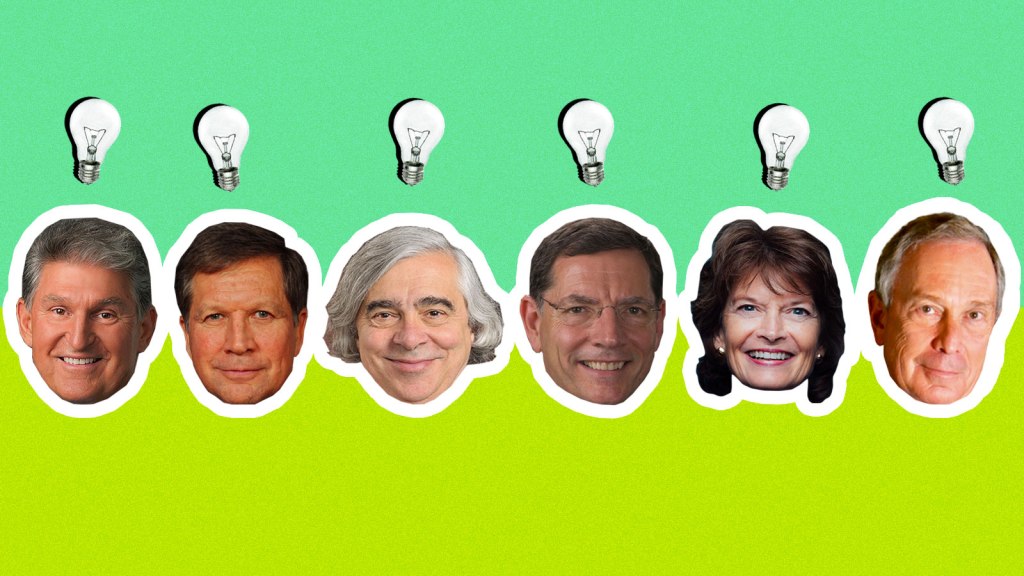 In the Green New Deal era, everyone has a climate ‘plan’ (even the right)

In a tweet re-upping her support for a Green New Deal, New York Senator Kirsten Gillibrand pointed out that our political leaders have spent too long ignoring the topic of climate change. “Not one climate change question was asked in the 2016 presidential debates,” she wrote on Monday. “We can’t wait any longer to treat this like the urgent, existential threat it is, and to push bold ideas to transform our economy and save our planet.”

A lot can change in three years. Ever since New York Representative Alexandria Ocasio-Cortez and Massachusetts Senator Ed Markey unveiled the targets of a Green New Deal — a national economic strategy to tackle warming and rising inequality — climate change has become a hot topic in Washington, D.C. Regardless of whether Congress ever passes any future Green New Deal legislation, the buzz around the plan has rocketed climate change near the top of the list of priorities for 2020 Democrats, Gillibrand included, and plopped the issue squarely on the national stage.

But not everyone is gung ho about the green utopia AOC and Markey outlined — a future in which workers are protected by unions, employed in high-paying green jobs, and covered by universal health care. Members of the GOP have not held back their disgust for the proposal. There’s already an endless reel of Fox News clips bashing Democrats for supporting a “socialist plot” to ban cows, airplanes, and everything else that sparks joy in the Republican party.

Not to be outdone by social-media savvy progressives, a few moderates and right-wingers have come out with their own alternatives. Anything worth writing home about? Let’s take a look.

Much like his dream of putting a tax on Big Soda, the former Big Apple mayor’s presidential aspirations didn’t quite work out. He recently announced in an op-ed that he won’t enter the race, citing an overly crowded Democratic field as his main reason. His plan, instead, is to keep shoring up an initiative he started with the Sierra Club in 2016: a campaign to retire America’s coal plants called Beyond Coal. He’s also planning a new project called Beyond Carbon, although details on what exactly that entails are still fizzy, err, fuzzy.

Bloomberg took a minute to appraise the Green New Deal in his op-ed, boldly predicting what many others have already surmised: The current Senate will never pass it. “Mother Nature does not wait on our political calendar,”  he wrote, “and neither can we.”

The former governor of Ohio and once-and-maybe future Republican presidential candidate penned an op-ed of his own this week in USA Today. Of the Green New Deal, Kasich wrote, “Many Republicans and even some Democrats fear it would stifle economic growth and kill jobs, set off a massive redistribution of wealth, and dangerously centralize federal government power.”

Kasich makes the case that a more moderate series of market-based approaches will do a better job of tamping down rampant global warming. He calls for reducing methane emissions, continuing subsidies for electric vehicles, incentivizing more natural gas production, and doubling down on cap-and-trade.

The Alaska Republican and West Virginia Republ … [checks notes] … Democrat collaborated on an op-ed in the Washington Post calling for action on climate change. The senators did not mention the Green New Deal in their call to arms. Instead, they opted to emphasize the importance of bipartisanship in developing climate solutions. “We come from different parties, but we are both avid outdoorsmen and represent states that take great pride in the resources we provide to the nation and to friends and allies around the world,” the duo wrote.

Now, you may be thinking, didn’t Murkowski recently revel in President Trump’s decision to slip a provision into the tax reform bill opening up the pristine Arctic National Wildlife Refuge for drilling? And hasn’t Joe Manchin voted anti-environment many times in the not-too-distant past? Correct on both fronts. So it’s not particularly surprising that the op-ed doesn’t offer much in the way of substantive climate solutions beyond the idea of “bipartisanship.”

The senators put their reaching-across-the-aisle plan in action by bashing the Green New Deal together at a global energy conference in Houston on Monday. Manchin said it had “no contents at all.” And Murkowski called the deal “distracting.” Instead, the two senators are laser-focused on a … carbon tax? Nope — in reply to a question posed by Axios’ Amy Harder, they each said they’re not ready to support that market-based solution yet, either.

By contrast, a CNBC commentary co-written by Moniz, who served as secretary of energy under Obama, and Karsner, who was George W. Bush’s assistant secretary for the Office of Energy Efficiency and Renewable Energy, offers a slew of solutions. The authors propose a “Green Real Deal,” which prioritizes innovation, the need for region-specific climate solutions, and low-carbon technologies — including an increased reliance on natural gas and nuclear.

“The mission is clear: Action is urgently needed to set and follow high-impact pathways to a low-carbon future,” Moniz and Karsner wrote on Monday. “We must, however, strive for a broader public consensus that respects local differences and allows all citizens equal opportunity to build a prosperous, fair, safe,and secure low-carbon future.” (Editor’s note: Andy Karsner is a managing partner at Emerson Collective, one of Grist’s funders.)

The Wyoming senator and chair of the Senate Committee on Environment and Public Works — who has labeled the Green New Deal “a raw deal” — published an op-ed in USA Today calling for more investment in nuclear and carbon-capture technologies. In it, he quoted an exorbitant price tag for the Green New Deal that, according to Politico, was effectively pulled from thin air by a conservative think tank. Barrasso also called the proposal “a gift to Russian President Vladimir Putin, weakening our economy and making us dependent on foreign energy.” Tell us how you really feel, buddy.