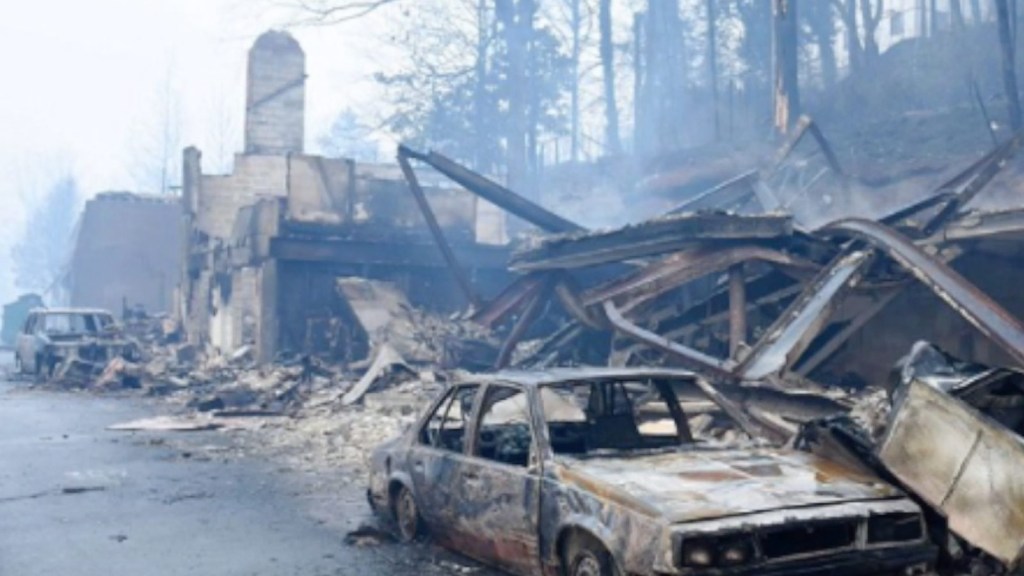 Daniel Hensley moved to Gatlinburg, Tennessee, a month ago with his girlfriend and infant son. On Monday night, they found themselves on the balcony of their motel, watching flames spread down the side of the mountain and engulf a cabin across the street. They escaped the motel “with nothing but our little boy,” he said.

Hensley and his family were among 14,000 evacuees who fled from their homes and hotels as wildfires ripped through the eastern part of the state earlier this week. He and many others took shelter at Rocky Top Sports World, an athletic facility just outside of Great Smoky Mountains National Park.

Scolding headlines note the irony of wildfires worsened by severe drought, hitting a region that largely voted for denier-in-chief Donald Trump. But although Hensley and others on the ground might not come right out and blame global warming, they acknowledge that a connection could be there — and they’re worried about it.

“It’s been real dry here for a while,” Hensley said. “It spread so fast because of how dry it was. And then you had high winds that brought it through and just made it even worse.”

Unusually dry conditions in eastern Tennessee spurred a ban on fires in the national park on Nov. 15. Despite that, officials now say that the Gatlinburg fire began in the park and was human-caused. It spread quickly Monday night because of high winds, downed power lines, and dry, parched woods.

This fall, Gatlinburg, like much of the Southeast, suffered through months of severe drought, which has become more common in the last 30 years. In the Western United States science has shown that climate change contributes to worsening fire seasons. And as Columbia University bioclimatologist Park Williams told PBS Newshour earlier this month, eastern Tennessee looked a lot like the west this year.

“We’ve never been this dry,” said Anthony Sequoyah, 50, the public safety director for emergency management services in nearby Cherokee, North Carolina. Sequoyah arrived in Tennessee on Monday to help fight the blaze. It was the “biggest mass destruction I’ve ever witnessed,” he added. “The fire bounced from ridge top to ridge top, motels, hotels.”

Neither Sequoyah nor Hensley were willing to come right out and blame climate change as an underlying cause of the drought and contributor to the fires. But others weren’t so reluctant.

“The seasons aren’t the same,” evacuee Allysa Joyner of Gatlinburg said. “That’s where drought comes in. That could be part of it.”

Climate change is hard to believe, she added, “until you see it.” Monday night, she did.

Today Tennessee is one of four states, along with Florida, Louisiana, and North Carolina, that allows teachers to “present alternatives” to the scientific understanding of climate change in the classroom. Trump won the state by a 26-point margin and carried Gatlinburg’s Sevier County with 79 percent of the vote.

Hensley said he didn’t know much about climate change. “I grew up in Florida and Mississippi,” he said, “and they didn’t teach it in school there.”

But he’d like to see more instruction about drought and its causes as part of Appalachian education. With a better understanding, he said, maybe local communities could “actually fix the problems, so this doesn’t ever happen again.”