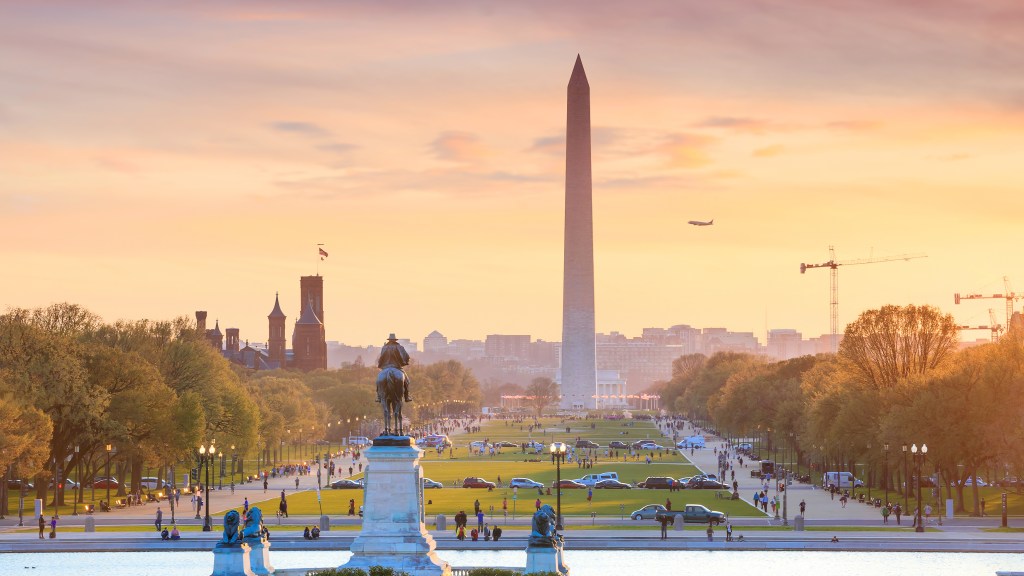 Washington, D.C., is positioning itself on the climate policy fast track. The District of Columbia city council voted unanimously last week to approve an expansive climate bill requiring utility providers to generate 100 percent of their energy supply from renewable sources by 2032. If D.C. Mayor Muriel Bowser signs the legislation as expected, the provisions will put the nation’s capital on a faster, formally pledged timeline toward cutting utility emissions than any U.S. state. (Hawaii and California have both pledged state-wide goals of 100 percent renewable energy for electricity by 2045.)

While several smaller cities have already reached similar 100-percent renewable energy targets, Washington, D.C., is by far the largest city to make such a commitment. And that’s not all that’s in the bill. Together, the provisions were dubbed the “strongest clean energy requirement in the nation,” by Mark Rodeffer, D.C. Sierra Club chapter chair.

So what’s in D.C.’s bill? And what can the rest of us learn from it, at a time when cities and states are racing to fill the gap left by federal regulators to slow climate change?

What the bill regulates: Electricity and some transportation

D.C.’s new bill is intended to dramatically decrease emissions from one of the most common sources, electricity, by ratcheting up the requirements on utility providers. D.C.’s current law already mandates that utility providers derive 50 percent of their energy supply from renewable sources by 2032, with 5 percent carved out for solar. The new bill doubles these figures to 100 percent renewables by 2032 with 10 percent solar by 2041.

Buildings account for 74 percent of D.C.’s carbon emissions. And the bill also establishes a separate program to set benchmarks for energy efficiency for the largest buildings in the city, those with more than 10,000 square feet of gross floor area. The specific standards, however, have not yet been set. According to Cliff Majersik, the Institute for Market Transformation executive director who worked on the bill, D.C. will become the first U.S. jurisdiction “to require a broad swath of existing buildings to improve their whole-building energy performance.”

The bill also tackles another major contributor of emissions: transportation. While the bill won’t do anything to regulate residents’ private transportation choices, it will regulate the city’s own contributions: By 2045, all public transportation and privately owned vehicle fleets in D.C. will have to produce zero emissions.

How would the bill be implemented?

The burden falls on utility companies to meet benchmarks for renewable electricity — or pay a price. Every year, the city sets renewable energy standards for companies to hit that increase incrementally until they reach 100 percent in 2032. What happens if companies don’t meet those standards? The city requires electricity suppliers to to make compliance payments into D.C.’s Renewable Energy Development Fund.

There are other guaranteed revenue sources to fund other parts of the bill. Utility companies serving D.C. are already required to collect fees from customers who use natural gas and electricity. These fees are put toward a fund for D.C.’s energy efficiency efforts. But this bill temporarily raises those per-unit rates and creates a new fee on home heating and fuel oil to raise even more money for energy efficiency. (D.C. residents who make under a certain income, with the amount dependent on household size, will still be eligible for utilities discounts.)

Some of the revenue from increased fees will be used to help low-income communities adapt.

“Communities that have done the least to cause climate change [are] disproportionately bearing the burden of climate change,” Judith Howell, a member of the labor union 32BJ SEIU, said in a statement. “Working people in the U.S. and around the world will be extremely vulnerable to those changes.”

Thirty percent of the additional revenue will be put aside for programs like weatherization and bill assistance for low-income households, as well as job training in energy efficiency fields. At least $3 million annually will also be allocated toward energy efficiency upgrades in affordable housing buildings.

The criticism that watered down one requirement for utilities

In November, local energy company Pepco ran some misleading ads on Facebook urging D.C. residents to “act now” and “act boldly” to achieve a “sustainable vision.” When users clicked through to a petition, what it was asking was that its customers oppose a provision of the bill requiring Pepco to use long-term contracts for renewable energy.

“Pepco wants residents to sound off on one small piece of the legislation: a requirement that Pepco purchase renewable energy under long-term contracts. According to the DOEE analysis, this provision would reduce greenhouse gas emissions by 8 percent by 2032.”

Majersik told CityLab that the long-term contract provision Pepco opposed was stripped from the bill, but may be proposed as part of a new bill in 2019. Ultimately, Pepco supported the revised bill and released a statement calling the legislation an “important step toward advancing the cause of clean energy.”

Among the primary supporters of the bill was the D.C. Climate Coalition, which included over 110 advocacy organizations, faith groups, unions, consumer advocate organizations, and D.C. businesses.

Camila Thorndike, D.C. campaign director at the CCAN Action Fund said in a press release: “With the passage of this bill, we’re taking the power back from President Trump and taking control of our energy future.”