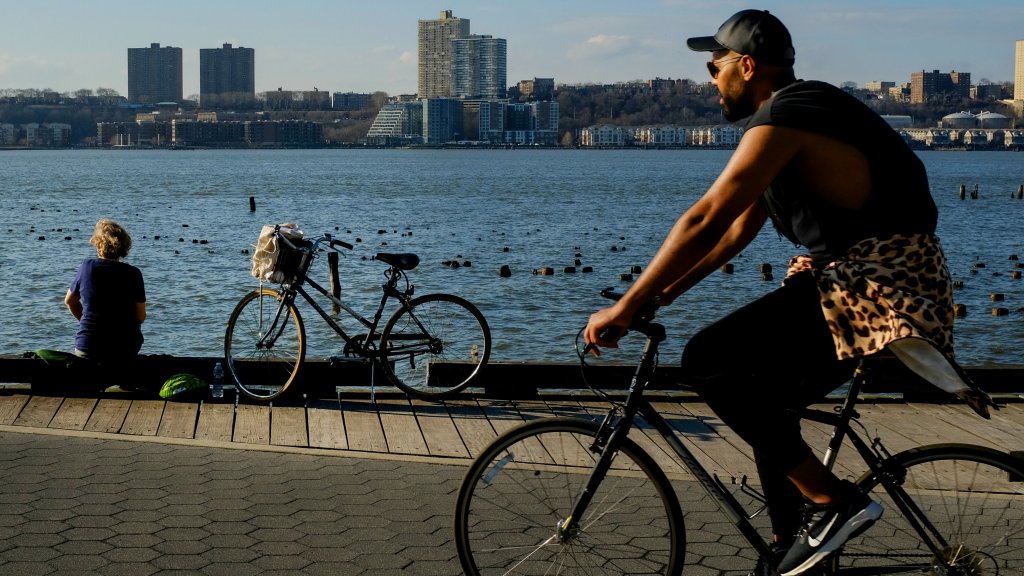 From the North Pole to New England, the weather this week is far, far out of the ordinary — then again, there isn’t really any such thing as ordinary any more. While the numbers are still rolling in, it looks like Wednesday will be the warmest February day in history for nearly the entire U.S. East Coast.

An unseasonable heat wave triggered the rare mid-winter melt, when an exaggerated jet stream sent a plume of tropical air from the Caribbean over eastern North America and into the Arctic. These are atmospheric conditions that would be unusual even for mid-summer, and the warming Arctic itself might be making them more likely.

The result is weather more suited to Memorial Day than Valentine’s Day. In the Northeast, temperatures are as much as 40 degrees higher than normal, with bewildered residents shedding their parkas to hit the beach. Boston hit 70 degrees on Tuesday — a mark not normally reached until May 27th — and then topped that on Wednesday with a June-worthy 72 degrees. It was the first instance of back-to-back 70-degree February days in nearly 150 years of record keeping in that city. Nearby, Fitchburg, Massachusetts hit 80 degrees.

In Washington, D.C., where some cherry trees have already begun to bloom, thermometers reached 80 degrees for the earliest date in the city’s history. That triggered the National Weather Service to switch into summer mode, calculating a heat index of 83 and warning of high pollen counts. The summery warmth is expected to linger at least through the end of the month.

If this all sounds familiar, it should: A similar (though less extreme) February heat wave happened at this exact same time last year.

In 2017, 17 states experienced their warmest February on record, leading to the early emergence of plants and animals across a huge swath of the southeast United States. Scientists rely on the connection between ecosystem signals and the weather to help define the official start of spring by the appearance of leaves, flowers, and birds — and last year’s signals were alarmingly out of whack.

It looks like that pattern is repeating this year, first along the Southwest and West Coast after a record-warm November, December, and January, and now in the East. According to the National Phenology Network, which uses a mathematical model to predict the start of spring and leaf emergence in real-time, spring has sprung as far north as Kentucky and Maryland, more than three weeks ahead of schedule.

All of this makes February America’s fastest warming month, especially in New England. Call it “Februne” — a little taste of summer at a time of the year that should be freezing cold.

There are obvious reasons to enjoy the starkly pleasant weather, but many are conflicted by yet another example of our strange new climate interrupting the natural rhythm of the seasons. There’s good reason to be unsettled: Plants and animals that have evolved together over millions of years have trouble adapting to change this fast. In some cases, when animals awake from hibernation, they might miss the emergence of the bug larvae that are their preferred food source– which themselves may have missed the early bloom of the flowers they rely on for food.

Migratory birds and butterflies veering off course are perhaps the most well-documented examples of this warming-induced phenological mismatch. As the trend toward a shorter winter continues, this effect will only grow more pronounced. And as nature de-synchronizes, things like pest outbreaks and crop failures may happen more often, too.

In the Arctic, as usual, the change is even more extreme. Northern Alaska is 45 degrees F warmer than usual and the North Pole is expected to briefly cross the melting point later this week — even under the complete darkness of midwinter. The Bering Sea, which separates Alaska and Russia, is now almost totally ice-free exactly when it typically hits its yearly ice maximum.

Or as Rick Thoman, a National Weather Service meteorologist in Alaska, put it: “You could sail a boat to north of the Arctic Circle. In February.”