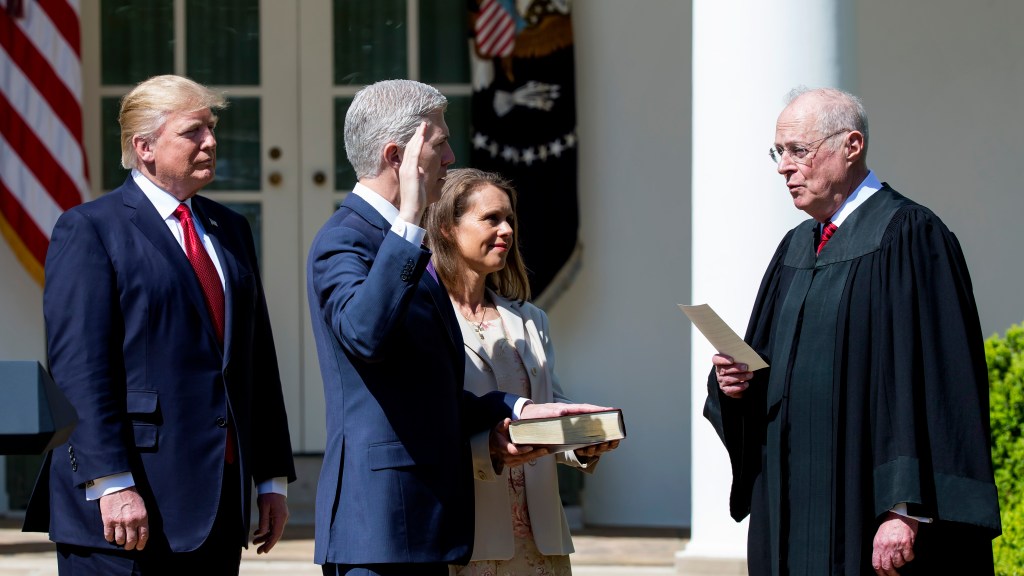 In a letter hand-delivered to President Trump on Wednesday, Justice Anthony Kennedy announced his retirement after 30 years on the Supreme Court.

Trump has already hinted at a list of potential replacements — all of whom are likely to side with the court’s now clear conservative majority. Kennedy has been the swing vote for decades. And without his moderating influence, advocates of the environment will face a steep challenge in winning over a majority of the justices.

With time quickly running out before the world locks in dangerous levels of climate change, that’s a frightening proposition. A more conservative-leaning court could make broad modifications to U.S. law that could last for decades. With environmental protections weakened, future presidents who want to take action on climate will have a much tougher time making lasting policy decisions.

It’s not an exaggeration to say that, when it comes to climate change and environmental protection, the next Supreme Court justice’s opinions will have consequences that are planetary in scope.

Since the implications of a solidly conservative Supreme Court are so far-reaching, Grist reached out to several environmental law experts to learn which specific rulings and regulations could be most at risk. Responses were lightly edited for clarity.

Massachusetts vs. EPA: Gives the government authority to regulate greenhouse gases as pollutants.

Justice Kennedy was in the majority on Massachusetts v. EPA. It would be quite something if a new court, by a 5-4 decision, opted to reverse such recent precedent. But given what we have seen in the last few days [from the Supreme Court], it’s not impossible to see it happening.

The Clean Air Act and climate protections are most at risk. Kennedy was the deciding vote on Massachusetts v. EPA, which reaffirmed the Clean Air Act as the most important mechanism for regulating greenhouse pollution economy-wide. We’re one vote away from losing fundamental protections for our climate.

“Waters of the United States” Rule: Provides protection to some wetlands.

The Trump Administration’s proposal to rescind the Obama-era Waters of the United States Rule — which would curtail the federal government’s authority to limit pollution in wetlands and other smaller bodies of water under the Clean Water Act — may well ultimately end up before the Supreme Court. Justice Kennedy’s replacement will influence how we protect our air and water, as well as how we respond to climate change, for generations to come.

I’m particularly concerned about the regulations that the Trump administration will introduce to replace Obama-era climate protections — for example the replacement to the Clean Power Plan. The administration will no doubt be gutting some of these rules and potentially violating statutory mandates in the process. It’s much more likely that the Supreme Court will uphold the replacement rules with another Trump nominee replacing Kennedy.

​There is a good chance that the new justice will go along with the other conservative justices in narrowly reading the regulatory authority that statutes like the Clean Air Act and the Clean Water Act give to EPA and other federal agencies. This could be bad news if the next President tries to revive something like the Clean Power Plan, which was widely portrayed as pushing the envelope of EPA’s authority — an issue the courts still haven’t decided.

My main concern is how the newly configured court will interpret environmental groups’ standing to sue to enforce federal laws. Justice Kennedy had a nuanced take on standing, and it is likely that Trump’s nominees will have a more blunt approach, one that seeks to significantly curtail the ability of these groups to get into court.

The future for environmental laws or standards:

Litigation is often the only option for those seeking to protect air and water and ensure public input on the value of sensitive ecosystems, endangered species, other wildlife species, and for those wanting to preserve important national landscapes. My general thought is that Kennedy was the last bulwark of reasonableness against the Trump Administration’s environmental onslaught. Every environmental lawyer I know is incredibly fearful of what this retirement will mean for the future of environmental protection in the United States.

I think just about any environmental rule that makes its way to the Supreme Court after Kennedy’s successor is appointed will be in jeopardy. We already have four hyper-conservative justices who tend to vote along ideological/party lines — and antipathy towards regulation, particularly environmental regulation, is a core part of that ideology. I have no doubt that Trump will nominate another conservative justice who shares his anti-regulation agenda. Through this justice, Trump will be able to continue advancing his deregulatory agenda for years after he his presidency ends.