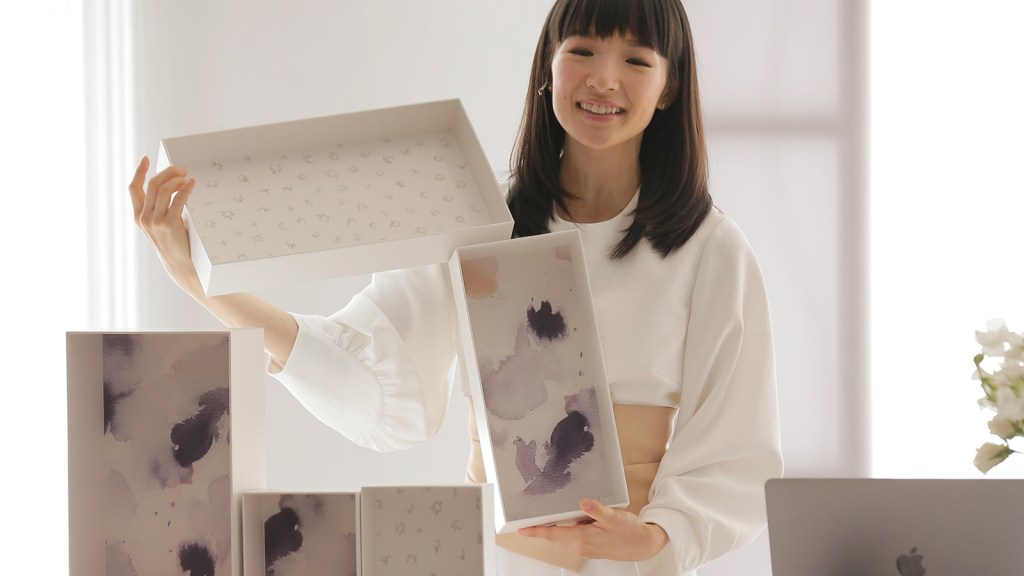 On New Year’s Day 2019, the Netflix-viewing public awoke to the release of the documentary series Tidying Up With Marie Kondo, and the canon of New Year’s resolutions got a new addition: To shed anxiety, live in the moment, and be your best self, all you need to do is get rid of most of your shit.

The show inspired a tide of tidiers following Kondo’s instructions to rid themselves of any items in their possession that did not “spark joy.” “Kondo-ing” entered the vernacular, and second-hand stores began overflowing with Kondo’d castaways. But now, a scandalous new development in the Kondo saga poses a question: Did the organizational guru just convince us to get rid of everything so that she could sell us new stuff?

I’m so excited to introduce the shop at KonMari. Many people have asked what I use in my everyday life. This online shop is a collection of my favorite things and items that spark joy. Shop now at https://t.co/2wzvoW1jqS – but don’t buy TOO much. 😉 pic.twitter.com/odfBhQLT3l

That’s right, just in time for the holiday season, you can log into Konmari.com and peruse more than 100 items that Kondo says bring her joy and will perhaps do the same for you. Contrary to what we all thought back when we were throwing away aspirational outfits, hard-won treasures, and irreplaceable mementos, the point, apparently, was not to reduce, but to replace. “My tidying method isn’t about getting rid of things — it’s about heightening your sensitivity to what brings you joy,” Kondo writes in a blog post introducing her new store.

But on the website, heightening your sensitivity looks suspiciously like aligning your taste with hers. Is your sensitivity heightened enough to enjoy a $75 leather box for storing business cards or paper clips? How about a $175 compost bin to give those rotting apple cores a luxury vibe? “The goal of tidying is to make room for meaningful objects,” the shop homepage reads. While some may find meaning in tuning forks and crystals, it’s harder to imagine “meaning” is the primary reason one would invest in a $60 food storage container.

Maybe it should come as no surprise that Kondo has entered the retail game. The self-help book author graduated to empire-builder back in 2016 when she began offering $2,000 seminars to certify consultants in her method. She was already trying to sell us her own brand of storage boxes as of last year. And “buying less” has never been a tenet of the KonMari brand. She doesn’t knock consumer culture or talk about the environmental and climate impacts of accumulating mountains of crap we don’t need and then sending it all to a landfill. In light of her new enterprise, Kondo’s allergic avoidance to these subjects makes a hell of a lot more sense.

Some have argued that using Kondo’s method to purge excess stuff is necessary to clear the way for making more intentional, sustainable purchases. A few items in Kondo’s shop do hint at a zero-waste lifestyle, such as these $20 reusable cotton rounds. But those cotton pads are just … cotton. Instead of buying them, why not take the t-shirt that doesn’t send a shiver of excitement down your spine anymore, snip it up into little circles, and use those to swab some toner on your face? The environmentally friendly choice is always to use/wear/consume the things you have down to the very last thread, or give them to someone else who will. If only Kondo were selling DIY reuse tips instead of crumb brushes — that would be a real game changer.