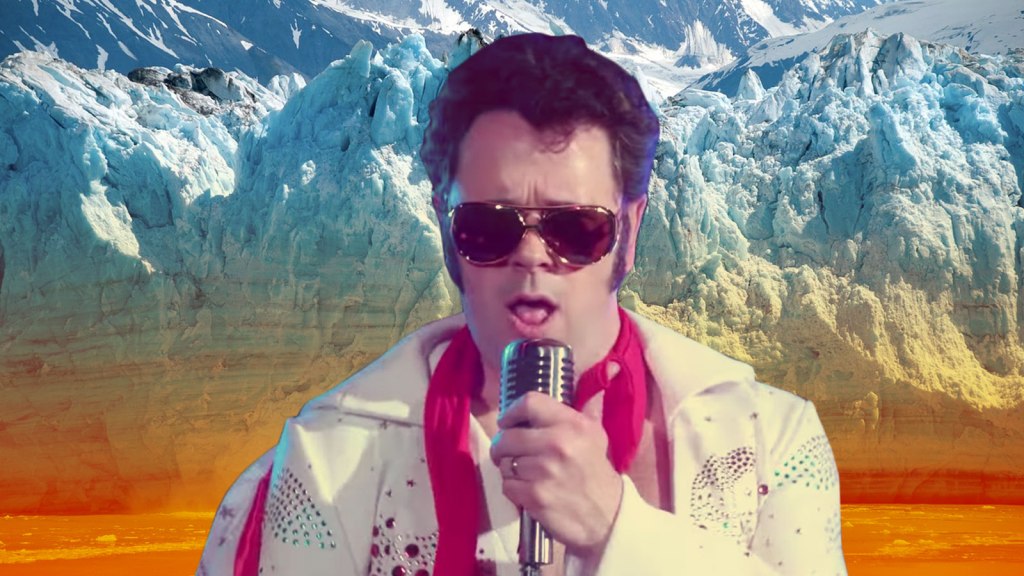 What do Josh Willis’ NASA colleagues and his fellow comedians have in common? They both quickly wore out the joke, “Don’t quit your day job.”

But Willis doesn’t mind — his day job is pretty sweet.

Willis works at the Jet Propulsion Laboratory in Pasadena, California, studying how ocean temperatures affect Greenland’s massive glaciers — a project he’s dubbed Oceans Melting Greenland, or OMG. He sums it up like this: “I fly around Greenland and drop things out of airplanes to see if we can figure out how fast it’s gonna melt.”

And when he’s not busy tossing sensors into the frigid waters where the Atlantic and the Arctic meet, he’s an improv comedian, comic writer, and occasional Elvis impersonator who hopes that joking about global warming might put a human face on an oft-demonized profession, and even open the door for conversations with folks who are still not convinced that we’re cooking the planet.

“Climate scientists have become a political weapon, right? We’re seen as this kind of imaginary force that’s either being manipulated or telling you the truth, depending on your political leanings,” Willis said. “We need to be humanized a little bit, because we’ve lost that.”

Willis, who has a PhD in oceanography from the University of California, San Diego, has spent years honing his language to better communicate his science to a broad audience — he could barely provide an esoteric research spiel when I specifically requested one. Still, if the eternal effort to convert climate skeptics has shown us one thing, it’s that data, however well-communicated, doesn’t really change minds.

That’s where the jokes come in, and the other diploma, from the Second City Comedy School, whose alumni include Steve Carell and Tina Fey. Willis doesn’t dress up as Climate Elvis and sing about melting glaciers to convince people that climate change is real — he does it to convince them that he doesn’t take himself too seriously. That way, tough conversations are easier to start.

“I had to convince my own dad that global warming was real when I was in graduate school learning how to be a scientist,” Willis says. “It didn’t happen overnight. I think a joke is an opportunity to have a longer conversation, but it won’t do the job by itself. If I can break the ice with a joke or two, then it makes it easier to speak about things that are meaningful and to find common ground.”

Most of his acts, performed in videos and onstage, involve characters who help explain or make light of climate science: He’s got Climate Elvis, who sings kid-friendly climate science tunes; Dick Dangerfield, a down-to-business puppet pilot; and Guy Scientist, his own self-absorbed, film noir alter-ego, who takes a creative approach to science communication with lines like: “Water sucks up heat faster than a desperate housewife sucks up mojitos on a hot summer day.” Hey, it’s hard to forget!

Comedy hasn’t just helped Willis pry open the minds of folks not inclined toward climate science — he says that being an improv comic has improved his research, too. The creativity he uses onstage inspired him to stop seeing science as a purely “technical exercise,” he said, and to ask more interesting questions and find more inventive ways to answer them.

Willis has the research chops to understand some seriously complex science, plus the lines to disarm the deniers. You’d think we could just send him on tour and quickly get everyone on the same age. Pack it up everyone, we solved climate change!

But he’s also learned the hard way that in both fields, sometimes you just bomb.

Back in 2006, Willis co-wrote a research paper that found something odd: The data suggested that the oceans were cooling, a huge affront to other scientists’ consensus about climate change. Rush Limbaugh had a heyday with the discovery. But days before Willis was scheduled to present the paper to a roomful of famous climate scientists, he found an error in the data. The whole thing had been a mistake.

It was Valentine’s Day, and Willis was supposed to spend a romantic evening out with his wife, but the blunder had him distracted. “I was thinking about my talk that was coming up, and the fact that the paper we wrote was probably wrong, and that Rush Limbaugh called me an idiot leftist scientist,” he said. “Dinner was not a happy affair.”

He knew what he had to do: He rewrote the talk he was scheduled to give, rewrote the paper with the new data, and went on a speaking tour explaining the error.

“We all fail and we all make mistakes — when you can own up to them, and try to move on, then people usually forgive you,” Willis said. “I think in comedy, the same thing is true. When you bomb, the best thing you can do is own up to it and make fun of yourself.”

Climate scientists are only human, after all.